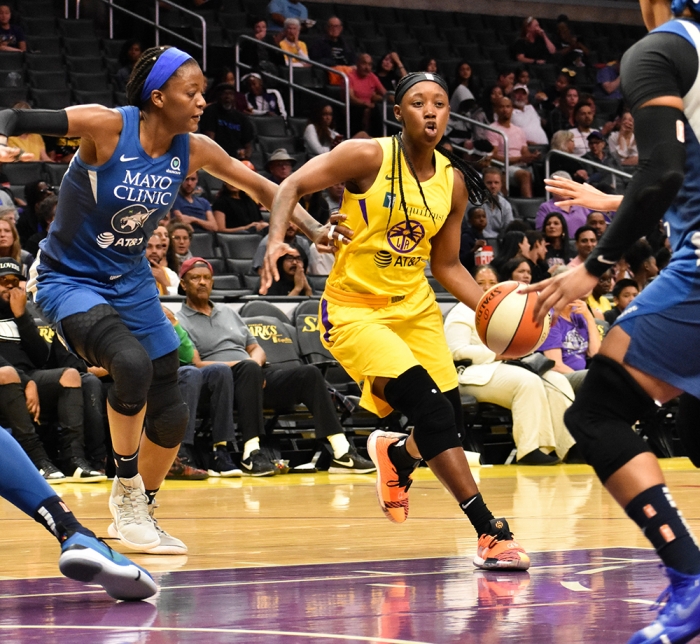 Alexis Jones put her best foot forward when she battled her former team, the Minnesota Lynx. Her efforts carried the Sparks to an 81-71 victory, making a career-high of 15 points in the matchup.

“They stayed committed to the defensive end even though offensively, it started out slow,” Fisher said. “Then as the offense came along, then they combined it with a good defense that they started playing with and they were able to put it together.”

The Lynx are different from previous seasons. With Maya Moore taking a sabbatical this year, guard Lindsay Whalen retired and Siemone Augustus sidelined for most of the season, center Slyvia Fowles is still a constant on the squad. A disruptive force that Parker knows all too well, Parker has played against Fowles since she was 14 years old.

“She’s been kind of the one that I’ve gone through every stage with,” Parker said. “We’ve really have fought for championships at every level, so it’s been fun to guard her.”

Fowles frustrated the Sparks the most in the early minutes, they worked to double team her. Both the Sparks and the Lynx were slow to score, however. They would trade shots later on in the first phase.

Jones came off the bench to lead the offense in the second quarter, scoring 14 points in the period. Jones helped the Sparks breakout on a five-point run when forwards Damiris Dantas and Collier helped the Lynx earn a one-point lead.

“I just played my role,” Jones said. “I just came in, came off the bench, try to come in with energy, shoot the right shots and just get back into the flow of how I know so I can help the team.”

As other Sparks players landed shots, they created a 20-point advantage. By halftime, the Lynx had 11 turnovers to the Sparks’ five. The Sparks also had 26 points in the paint, eight over the Lynx.

Minnesota had a three-minute offensive standstill as the Los Angeles lead ballooned to 30 points. Guards Tierra Ruffin-Pratt and Chelsea Gray showered Minnesota with three-pointers. The Lynx only made 12 points during the third quarter.

Collier and Brown hustled hard to close a 24-point deficit. Guard Odyssey Sims also joined in, scoring fastbreak points. The Sparks began missing shots and Brown’s three-pointers were putting the Lynx back in the game.

“She’s a great shooter … It was on us defensively to get that stop and I was on her most of the time and I didn’t get it done,” Sparks guard Alana Beard said about Brown. “That’s something we can correct, that’s something I can correct.”

With 1:23 left in regulation, the Lynx closed their deficit to seven, but could not close it further. The Sparks will battle the Indiana Fever next on Thursday, August 22 at 7:30P.M.