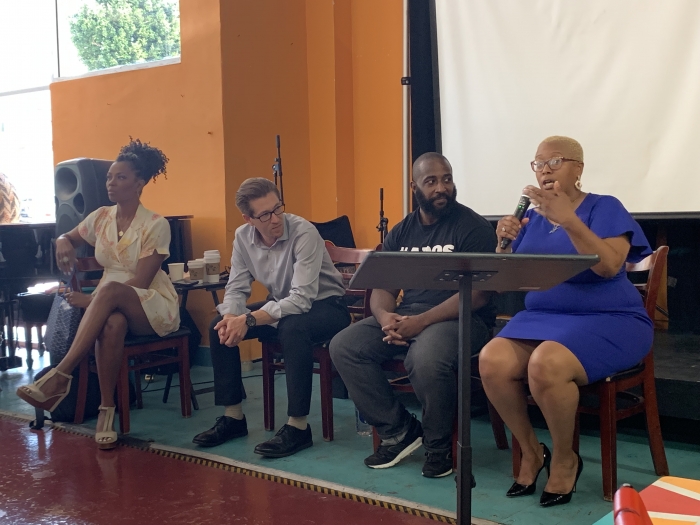 After decades of relentless political indifference, reparations for slavery have finally arrived at the forefront of national American politics. Practically every 2020 Democratic presidential candidate has embraced the concept to some degree. Many of them attended Al Sharpton’s National Action Network convention in April and promised to sign H.R. 40 if elected president. However, many Black Americans remain concerned as to how substantial the candidates’ plans for reparations truly are. Are candidates making reparations a real priority, or has the term merely become the latest buzzword, guaranteed to garner applause on a debate stage?

To discuss this topic more concretely within the African American community, representatives of #ADOS – which stands for American Descendants of Slavery – hosted a town hall on Saturday, August 10 at Leimert Park’s Hot and Cool Café.

Since it was founded in 2016 by Breaking Brown host Yvette Carnell and attorney Antonio Moore, the #ADOS movement has strived for social and economic equality by placing African American identity and linage front and center. The blossoming grassroots movement has embraced comprehensive reparative justice as the only solution to widespread racial inequality, and most notably, America’s massive racial wealth gap.

The town hall was moderated by actress Vanessa Williams, who said she was proud to shed light on issues plaguing the Black community.

Williams introduced the first speaker, Chris Lodgson, a Sacramento resident and Northern California ADOS organizer. Lodgson opened his presentation with a video of Dr. Martin Luther King Jr. in which the iconic civil rights activist draws a connection between government-provided economic support for white Americans and the financial plight of Black Americans. The clip ends with this famous quote: “Now, when we come to Washington in this campaign, we are coming to get our check.”

That clip, Logdson said, illustrates the core of the #ADOS movement, which is to demand that the federal government take up an agenda to specifically address the losses African Americans have suffered due to the institution of slavery and its enduring legacy throughout American history.

Lodgson then went on to speak about the importance of wealth – a dollar amount indicating an individual’s debt subtracted from their assets – in that legacy. Wealth, he said, is the most consequential factor in your life, the best measure of your economic well-being, and the best indicator of structural racism. Most importantly, he added, it is the best way to measure “the cumulative effects of the full trajectory of harms thrust upon Black Americans.”

Citing a study called “The Color of Wealth in Los Angeles,” Lodgson noted that the median value of liquid assets among African American households in Los Angeles is only $200. For comparison, the same study indicates that the median value of liquid assets among African Blacks is $60,000, and $110,000 for Whites. Logdson reminded the audience that Black families in other cities fare even worse – another report found that the median liquid wealth of American Blacks in Miami was a staggering $11. If you were to add up the wealth of the bottom half of all Black Americans, Logdson said, you would get a number in the negative billions. If these trends continue as they are, Black wealth will only continue to decline. 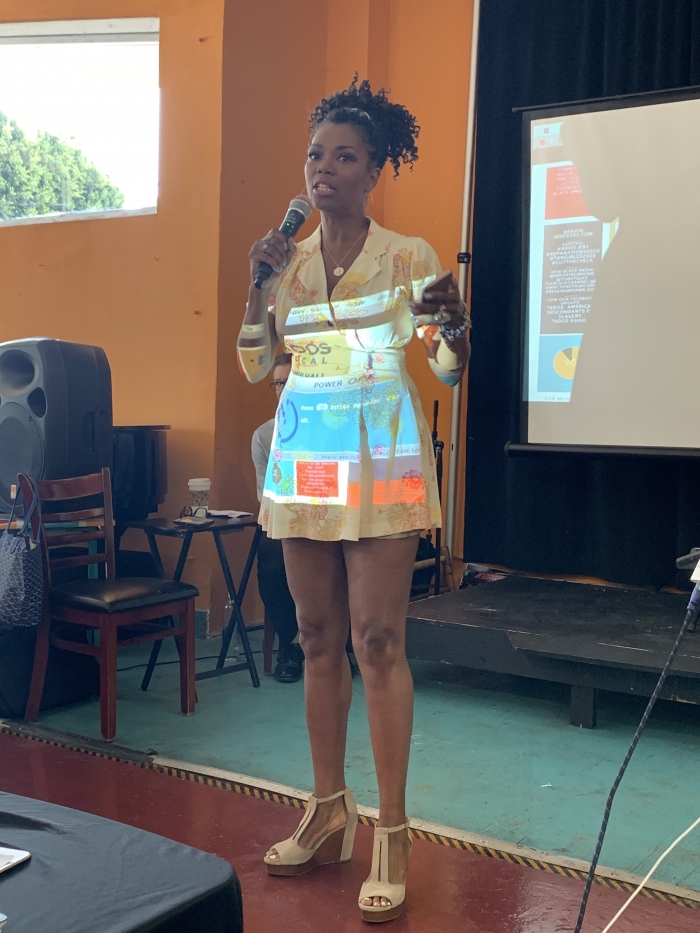 “This is for the group that built the county,” Lodgson said solemnly.

He then turned the subject of solutions. American Blacks, he said, have been approached with several well-meaning but ultimately ineffective suggestions for closing the wealth gap: higher incomes, homeownership, business ownership, advanced education, improved financial literacy, or simply working harder.

The only viable solution, Lodgson said, is a comprehensive, data-driven reparations program and political agenda that solely addresses the country’s ADOS population – not non-American Blacks or other racial minorities. Based on the work of leading reparations experts William “Sandy” Darity Jr. and Dania V. Francis, who assessed the financial gain of white southerners from slave ownership, #ADOS sets the estimated value of America’s debt to ADOS as $5 trillion to $10 trillion. Moreover, #ADOS calls for a separate ADOS census category, 15 percent of SBA loans to be reserved for ADOS businesses, and forgiveness of all ADOS student loan debt.

All this, Lodgson said, is only the beginning. He encouraged the audience to embrace #ADOS as the future of Black politics and the first step toward righting the historical injustices inflicted upon Black Americans. To learn more about the #ADOS agenda, visit ados101.com.

Lodgson’s talk was followed by Khansa Jones-Muhammad “KJ” Clark, an elected Budget Advocate for the City of Los Angeles who is now running for Council District Seat 8. As she has worked with councilmembers to address community problems, Clark said she quickly realized that the interests of South Los Angeles are often brushed aside and never brought to the table. She said she would dedicate herself to amplifying the voices of Los Angeles’s Black community if elected.

During her presentation, Clark referenced several studies demonstrating racial inequality in multiple spheres, including wealth, health care, criminal justice, neighborhood violence, and more. She was particularly emphatic about the massive issue of homelessness in Los Angeles as it relates to a lack of affordable housing and a revolving door between prisons and streets.

Clark concurred with Lodgson that the city should regularly collect data on ADOS welfare in order to deploy its resources most effectively. There is no one-size-fits-all policy, she said, and the city must acknowledge that these problems are not evenly distributed among the races. To learn more about Clark’s proposed policies, go to kjclark4cd8.com/priorities2020.

Lastly, Steven Band, the California director of Marianne Williamson’s presidential campaign, addressed the audience. Williamson, a self-help author and spiritual guru, has garnered praise for her proposal to secure $200 billion to $500 billion for a reparations program. According to her campaign website, it would be up to “an esteemed council of African-American leaders” to determine how the fund will be dispersed across social, economic and educational projects.

While Band attended the event in part to introduce voters to Williamson’s campaign, he said his main purpose was to hear the grievances of community members in order to report back to the campaign.

“We know that those of you who live this issue every day are the ones whose voices are most often lost in this discussion,” Band said. “But we know that yours are the voices that are most important.” 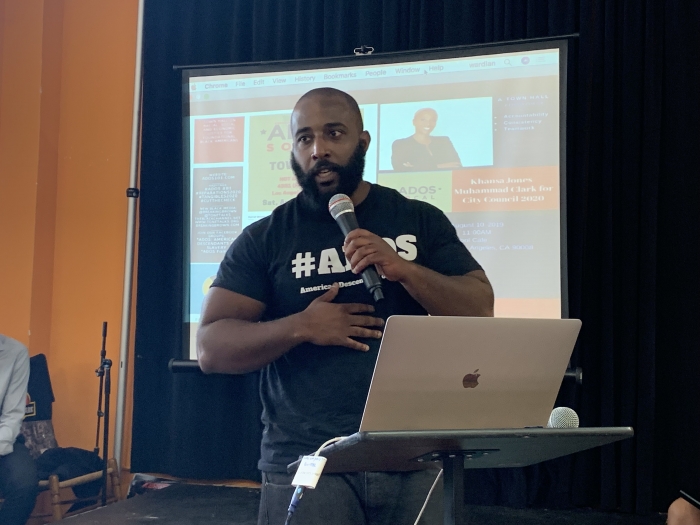 Band spoke mostly about Williamson’s response to hatred in this country, which he said has only been exacerbated by a president who “is spewing bile” on Twitter. Love, he insisted, is the only force that can counter the alarming rise of racial violence, hate crimes, and other symptoms of division and hatred.

During the Q&A portion, many audience members expressed concern about Marianne Williamson’s racial justice plan, as the amount she proposed for reparations falls far short of that in the #ADOS agenda. This sparked a larger debate about the balance between the ideal agenda and political feasibility, a line which every presidential candidate must tow carefully. Ultimately, the panelists acknowledged that this is only the beginning of a national conversation about reparations, and the best thing average citizens can do is start activism in their local communities and go upward from there.

She hopes that people walked away from the town hall armed with the information and determination they need to fight for change at the local level.

“I hope people take away a sense of empowerment,” she said. “I do not want to be a leader that’s not part of a team, and to me, the constituents become part of that team. So, I hope that a true partnership in terms of me in office and the position that I’m running for, inspires people to really activate within this community.”

The Sentinel spoke briefly with Lodgson after the event, and he said #ADOS will continue to host conversations on reparations and do the political advocacy needed on the ground in order to make them a reality.

“We need to be unapologetic and forthright in our demands,” he said.

The #ADOS movement is open to allyship with other underrepresented communities, Lodgson said, but only on the condition that it will not compromise its terms.

Correction: The print version of this article mistakenly referred to Vanessa Williams as Vanessa A. Williams. 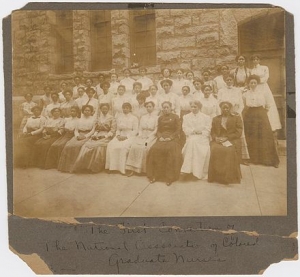 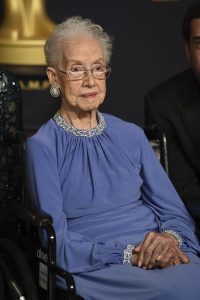 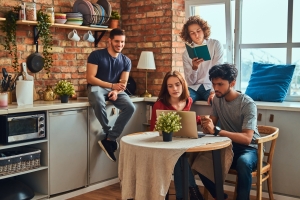