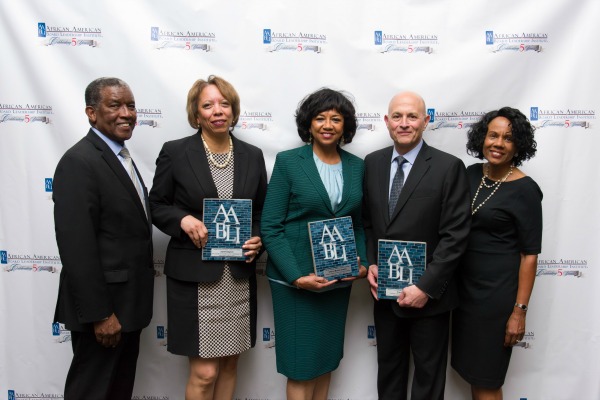 Making a difference aptly describes the three recipients of the 2017 Vision Awards presented by the African American Board Leadership Institute (AABLI).

Fred Ali, Janet Clayton and Cheryl Boone Isaacs were recognized for their leadership and commitment to diversity and inclusion at the AABLI’s 5th annual Tribute Reception held May 17 at City Club in Los Angeles.

The event, which AABLI holds to acknowledge individuals who open the doors of opportunity to shape positive change, reflected the group’s mission to recruit, prepare and assist with the placement of African Americans on nonprofit, public and private governing boards.

“The three honorees are great examples of thought leaders who astutely move the needle of change in board rooms to address community concerns with relevance,” said AABLI President and CEO Yvette Chappell-Ingram.

Ali, in his position as president and CEO of the Weingart Foundation, supports nonprofit organizations to more effectively address the needs of low-income and underserved individuals and communities in Southern California.

Clayton is the senior vice president of corporate communications for Southern California Edison and its parent company, Edison International. She directs internal and external communications, corporate and brand positioning, and community relations and philanthropic programs. She previously worked several years as part of the L.A. Times leadership team where she earned three Pulitzer awards as editor.

“Organizations like AABLI exist to help us figure it out, to share the unwritten codes of board operations and the expectations and required knowledge of nonprofit and corporate board members,” said Clayton.  “I’m honored to be recognized by AABLI, an organization that keeps creating firsts. At some point they won’t be any more firsts to be had, but until that day comes, we need AABLI and I’m proud to support it.”

Isaacs captured international headlines in her role as the first black president of the Academy of Motion Picture Arts and Sciences (AMPAS). In response to the #OscarsSoWhite campaign, she successfully guided the organization toward greater diversity and inclusion by removing restrictions limiting AMPAS membership and inviting 400 young, multicultural members to join the Academy.

“Thank you for not just honoring me, but for the way you honor our community every single day by keeping faith with the mission of breaking down barriers and opening doors so that the boards we serve on actually resemble the real world around us.  It is so important what you do,” said Isaacs.

In a separate interview, she stressed that while her four-year term as president will end this year, she will remain active with the Academy.  “I got all the way to the top and I think it’s time for new blood. I wanted to give others opportunity.  I’m still a member and I’ll still be there. I’m part of a very small group of past presidents,” explained Isaacs.

More than 300 people attended the reception and learned more about AABLI’s effort to train African American candidates for board service.   To date, 482 people have completed AABLI programs and the organization has assisted 137 individuals with placement on boards and city, county and state commissions.