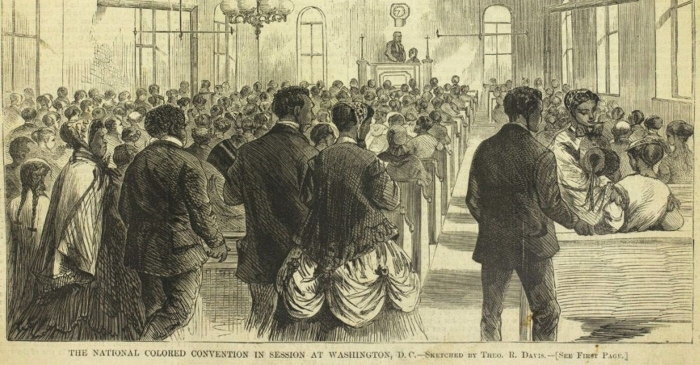 “The National Colored Convention in Session at Washington, DC.” Harper’s Weekly (February 6, 1869). (Courtesy of the Library Company of Philadelphia, https://librarycompany.org/)

As conservatives in some states continue to assault the fundamental right of citizens to vote by purging voter rolls, requiring certain ID’s and adding onerous burdens to dissuade folks from voting it’s important to note that this is nothing new. In fact, this week marks the 150th Anniversary of the Republican Party’s effort to put a halt of the former Confederate states’ and some former Union states’ efforts to prevent the newly freed slaves from exercising the franchise.

Voting, or the ability to have a say or at least the appearance of a voice, is seen as a fundamental, basic, guaranteed right in American democracy. Taxation without representation is what led to this country’s violent break with its then-colonial master England.

The right to vote is seen in the U.S. as one of the most fundamental tenets of the nation’s democracy. However, historically many people who qualified as citizens of the republic were denied the right to vote from the beginning, including women and poor White men. In the early days of the Republic, the franchise was given only to White males who owned property.

Immediately after the Civil War, as a result of Union soldiers being stationed in Southern states, newly freed slaves were allowed to vote. Before the passing of the 15th Amendment, Congress had passed the Territorial Suffrage Act as means of allowing Blacks to vote in the newly opened U.S. territories.

“The right of citizens of the United States to vote shall not be denied or abridged by the United States or by any State on account of race, color, or previous condition of servitude. The Congress shall have power to enforce this article by appropriate legislation.” So reads the 15th Amendment, ratified on February 3, 1870, the third of what came to be known as the Reconstruction amendments.

The Reconstruction amendments included the 13th, which outlawed slavery, and the 14th, which granted citizenship to the freed slaves as well as guaranteeing equal protection under the law.

The 15th Amendment was passed by the United States Congress in 1869 in a move designed to assure the right to vote to its newly freed ex- slaves.

The Radical Republicans did not wholeheartedly support the bill because it did not include wording that would prohibit poll taxes and literacy tests that were already being employed to prevent Blacks from voting. The monied class among the Whites recognized immediately the danger of Blacks being able to vote. Not only would White Supremacy be challenged, but they understood the ex-slaves had a more egalitarian, labor rights-friendly and social justice-oriented political agenda.

Technically, as citizens of the U.S., the freedmen had the franchise, but this amendment sought to cement that idea and prevent interference with Black voting. The newly freed slaves quickly took advantage of their ability to vote and voted their interests, which ironically helped lift the plight of their poor White brethren. As a result of being able to vote, Black voters sent several of their own to Congress. One of the most notable was Hiram Revels of Mississippi.

Revels was the first African American senator. He was one of the 16 Black men from seven Southern states who served in Congress during the Reconstruction era (1865-1877). They served as public officials under the constant threat of racial violence. In fact, Revels was eventually literally chased out of office and had to run to avoid being lynched.

The 15th Amendment did not give women the right to vote, nor did it give Native Americans the franchise. It continued to exclude ethnic Chinese, but it did open the door for poor White males.

The Amendment was ratified by 29 states. (Tennessee did not ratify the amendment until 1997.)

The failure to enfranchise women caused a rift in the Women’s Suffrage Movement in which many supporters of suffrage were also abolitionists. Leading women voting rights advocates Susan B. Anthony and Elizabeth Cade Slaton broke with the leading suffrage group as a result of Black voting rights being protected, but women were still left without the franchise.

While allowing the ex-slave the vote was a significant step in including the freedmen and women in U.S. society, the move was not altruistic. The ending of slavery meant the ending of the three-fifth clause in the Constitution. As a result, the newly freed slaves would be counted as individuals and would increase the representation of Southern states, which were more populous than Northern states as a result of the ex-slaves.

The Southerners sought to use this representation to their advantage by attempting to prevent African Americans, who overwhelmingly supported the Republican Party, from voting. White supremacist groups like the Ku Klux Klan, Red Brigade and White Citizens Councils also formed following the Civil War. These terrorist groups engaged in violence and other racist tactics to intimidate African Americans, people of color, Black voters and legislators.

In a history seldom told, in North Carolina, Louisiana and Mississippi hundreds of Blacks were murdered in local coup de tat’s in which White Supremacists overthrew democratically elected city governments by force. These terrorist acts to limit voting were accompanied by the Black Codes.

The Black Codes were enacted by Southern states as a means to technically re-enslave Blacks and make them a permanent caste and underclass in the U.S. The codes sought to prevent Blacks from purchasing and owning guns and land. They restricted Blacks’ movement through racist vagrancy laws in which a Black person had to have a White person vouch for them.

The Black Codes forced the former slaves to enter into exploitative, yearlong labor contracts that hindered their ability to sell their labor to the highest bidder. Under the codes, no Black person could testify in court or sue a White person. 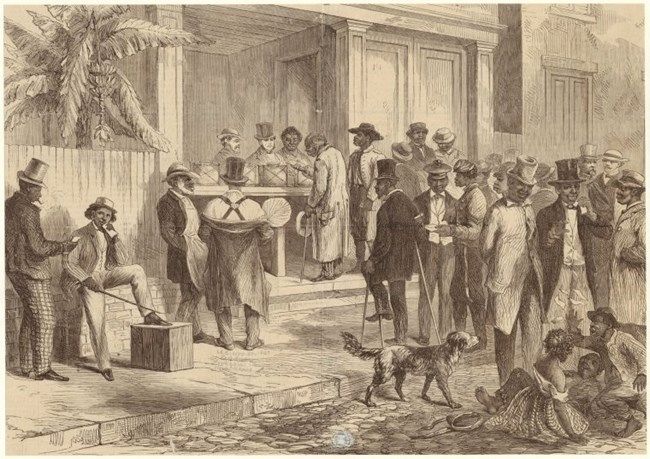 Historically, the 1965 Voting Rights Act sought to do what the 15th Amendment was designed to accomplish, which was to assure that Black people, especially in the Southern states, could cast their ballots. Sections 4 and 5 of the Voting Rights Act required states and local governments with histories of racial discrimination in voting to submit all changes to their voting laws or practices to the federal government. Once approved, they could take effect, a process called “preclearance.”

However, the Supreme Court has loosened the rules, opening the door to chicanery on the part of those who seek to limit the civil rights of Blacks and people of color. It includes proposed voter ID laws; closing polling stations, putting them out of the reach of the transit-challenged; and eliminating people from the voter rolls who have skipped an election or two.

While the right to vote by U.S. citizens has never been in question, who can vote is still being hotly contested in the U.S. as various states continually seek to find ways to prevent people from voting, especially Black and Brown people.

Black people’s political power is diminished by the fact that incarceration serves as a disqualification from the voting rolls, especially since a higher percentage are locked up by the bias inherent in the U.S. justice system. Moreover, though the first section of the 15th Amendment declared that the right to vote cannot be “denied or abridged” because of “a previous condition of servitude,” ex-prisoners are consistently denied the right to vote, a clear violation of the spirit of the amendment.

Apparently, judging from the history of Blacks and the vote, it is a right as long as they are willing to fight for it.

W.E.B. DuBois observed, “The slave went free; stood for a brief moment in the sun; then moved back again toward slavery.”t