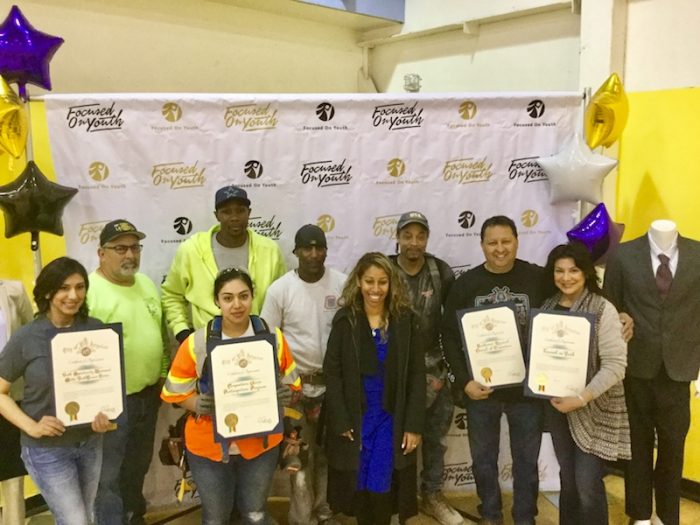 On Saturday, March 2nd 2019, The Southeast YouthSource Center- Los Angeles Youth Opportunity Movement Watts (LAYOM- Watts) in partnership with Focused on Youth a Southern California based non-profit began construction on a functional clothes closet to provide business professional clothes for the LAYOM Watts participants. The majority population of LAYOM-Watts participants consists of at-risk youth, many are Foster youth, current or former probation youth, homeless, and/or low income. In realizing the gap in services for the immediate needs and lack of business professional clothing, LAYOM-Watts and Focused on Youth thought it best to have an on site wardrobe. As of today Focused on Youth has donated over $5,000.00 worth of interview, office attire, accessories, as well as hardware and fixtures.

The Southwest Regional Council of Carpenters has also played an monumental part in bringing the project to fruition. Ted Jimenez, the Carpenters Union Special Representative collaborated with the Carpenters Union Participation Program (CUPP) and made the dreams of turning a small space, 5×7 feet, male locker room into a beautiful boutique. Six amazing volunteers on Saturday, spent eight hours providing labor, materials and equipment to make the clothes closet a fully functional. This venue will soon provide participants with their next interview outfit.

The International Brotherhood of Electrical Workers, Local 11, Electrical Workers Minority Caucus (IBEW Local 11, EWMC) also sent six volunteers who contributed their time and skills on Saturday. New electrical lines were laid, receptacles were put in place, and lighting fixtures were installed. This project could not have taken form if it was not to the generous people of the community who had the desire to partake in this small but impactful project.

On Saturday there was representation from Mayor’s Garcetti’s Office as well as Councilman Buscaino’s Office. Certificates honoring the volunteers were distributed for the hard work and their commitment to the community.

The clothes closet is expected to open on Tuesday, March 19th 2019 to LAYOM-Watts participants. Please call LAYOM-Watts if you are interested in programs and services, (323) 971-7659.