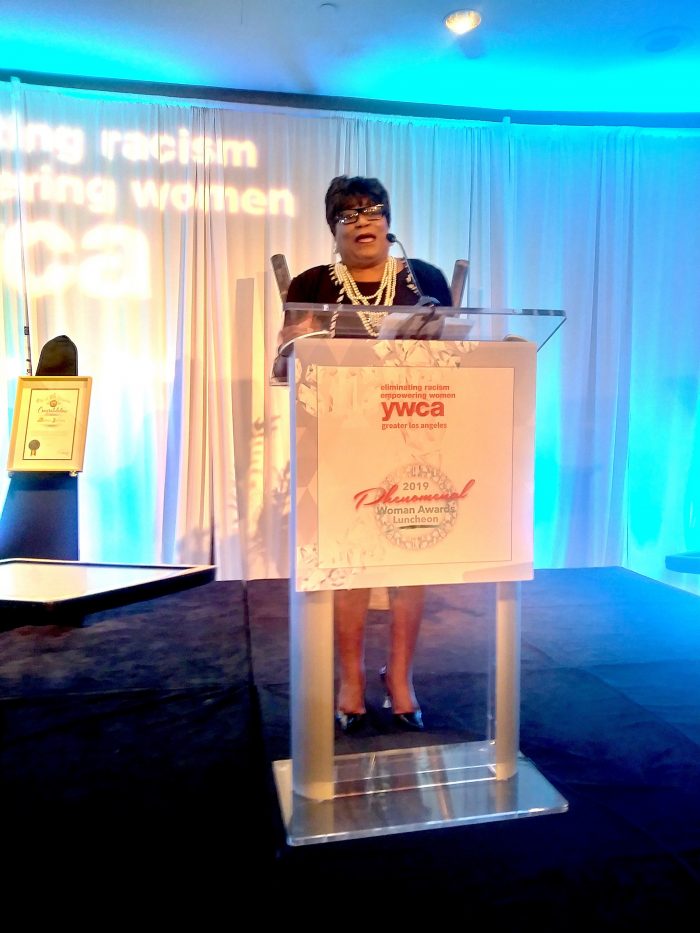 Over 400 guests gathered at the Omni Hotel in Downtown Los Angeles May 9, for the 2019 YWCA Phenomenal Woman Awards Luncheon, where they honored woman of the year Maria Salinas, the first female president and CEO of the Los Angeles Area Chamber of Commerce. A three course meal was served to the crowd as they were educated on the many accomplishments of the organization. Event guests included Heather Hutt, Christine Devine, and Nury Martinez.

Salinas accepted her award with a heartfelt thank you to Faye Washington who is the YWCA president and CEO. In turn, Washington gave her heartfelt thanks to the guests as well as all of the people who help make the YWCA’s work possible. None of it, not the workforce development programs, the youth services, child development, sexual assault prevention, would be possible without the help of those volunteer, sponsor and donate, Washington said.

“I’m so proud of everyone here today,” she told the crowd.

“Without you, we couldn’t do this. With you, we don’t fight alone. Our theme today is ‘a change is gonna come’ and a change is going to come. In order for us to survive, a change must come. 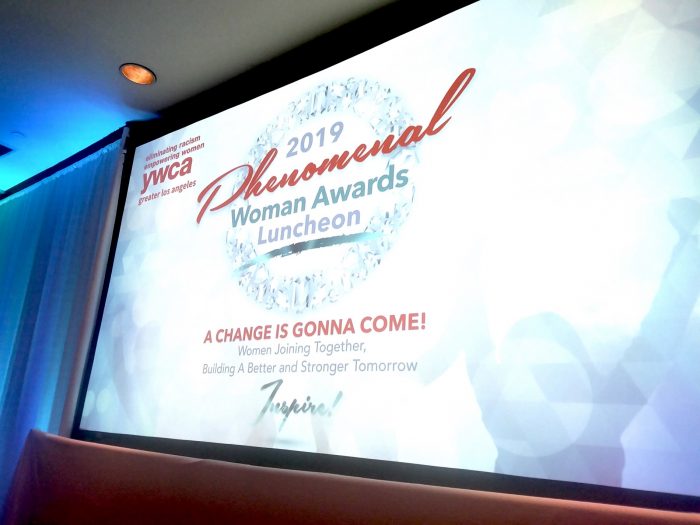 “You are all part of the important mission of empowering women,” she said during her acceptance speech.

“When I think of leaders and I think of empowerment, there is no better example than Faye Washington.”

Salinas went on the tell the story of how Washington helped and encouraged as she struggled in the beginning of career as the first female president and CEO of the Greater Los Angeles Area Chamber of Commerce..

The late LAUSD Superintendent, Dr. Michelle King was also honored during the ceremony via a slide show of her life.

Rounding out the ceremony was the recognition of all the “phenomenal women” who have helped make all of YWCAGLA’s programs possible. Those included the women of: SoCal Gas, SC Edison, US Bank, CIT OneWest Bank, Toyota and Union Bank.

The YWCA is dedicated to eliminating racism, empowering women and promoting peace, justice, freedom, and dignity for all.

“As a YWCA, we advocate for justice and dignity for all people. For over a century, the YWCA Greater Los Angeles has provided housing and supportive services. YWCA GLA is pioneering a model of community centers and housing – co-created with diverse stakeholders – to transform lives, build self-reliance and, ultimately, strengthen communities,” according to their mission statement.

“Our participants come from different walks of life, socio-economic backgrounds, age groups, genders, ethnic backgrounds and religious faiths. We serve anyone and everyone who knocks on our doors and needs help. We strive to stand ready to serve wherever and whoever they are.”

According to organization officials:

-80% of the over 1200 students to enroll in Job Corps annually increased their vocational skill level and entered the workforce; these students received twelve months of support after exiting Job Corps; six months after being hired, these individuals increased their earnings by 7%

-The majority of Middle School students in YWCA After School programs increased their academic performance in Math and English Language Arts; they reported having a relationship with a positive caring adult and attributed that to YWCA staff

-Almost 1,000 children receive care from the YWCA annually; the majority of these families participating in YWCA Child Care receive care free of charge

-Every year, hundreds of seniors receive quality care and participate in tailored activities at the YWCA West Los Angeles Program Center; the majority of these individuals live alone and depend on the YWCA for a myriad of services