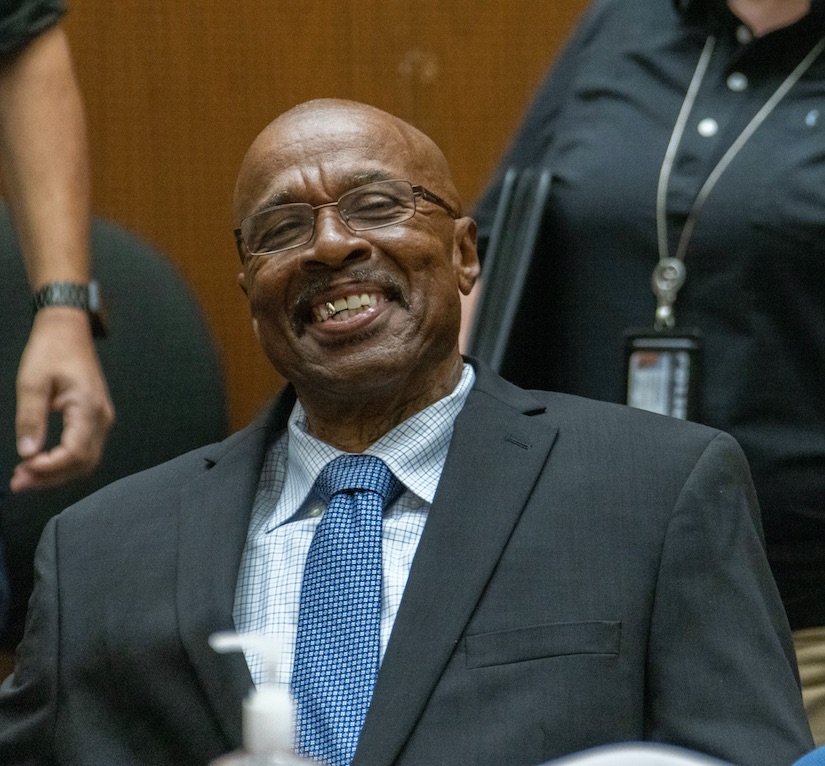 “I prayed for many years that this day would come,” Hastings said during a news conference on Friday, Oct. 28 at the Hall of Justice in Downtown Los Angeles. “I thank the District Attorney’s Office, my attorneys and my family for standing behind me. I am just looking forward to moving forward. I am not pointing fingers; I am not standing up here a bitter man, but I just want to enjoy my life now while I have it.”

No physical evidence linked Hastings to the 1983 robbery-homicide and sexual assault in Inglewood, California, for which he was arrested and convicted; and numerous alibi witnesses attested to his whereabouts during the crime. Prosecutors sought to impose the death penalty following Hastings’ guilty verdict, but the jury instead sentenced him to life in prison without the possibility of parole.

Biological evidence collected from the victim as part of a sexual assault kit had been preserved but never DNA tested, despite Hastings’ repeated requests dating back decades. “I have been incarcerated for over fifteen years for a murder that I did not commit,” Hastings wrote in a letter to the Los Angeles County District Attorney’s Office in 2000. “The most compelling of the evidence that has not as of yet been examined is the DNA evidence which will conclusively show that I was not the person involved with the deceased at the time of the crime.”

That evidence—an oral swab from the victim that contained semen—was tested in June and excluded Hastings. The testing also produced a new DNA profile that generated a hit when uploaded to the Combined DNA Index System, or CODIS, to a DNA profile linked to a known sex offender. While the identity of that individual has not yet been disclosed, the District Attorney’s Office said the individual was a convicted sex offender of similar physical description to Hastings, who was not previously considered a suspect, and died in prison in 2020 while serving a sentence for kidnapping and rape.

“Mr. Hastings has steadfastly maintained his innocence since his arrest in 1984,” said LAIP at Cal State LA Director Paula Mitchell. “He has demonstrated immense resilience and grace in the face of this horrific and manifest injustice. After so much has been taken from him, Mr. Hastings can now clear his name and finally walk free.” 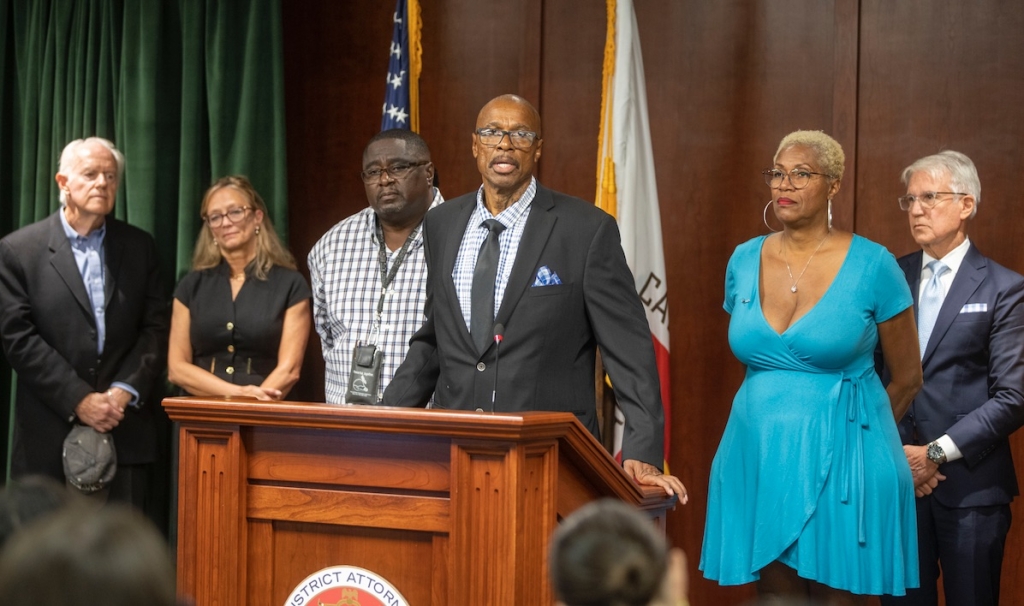 Gascón, Mitchell and “MASH” actor Mike Farrell, an anti-death penalty advocate, spoke during the Oct. 28 news conference, underscoring the importance of fighting to correct wrongful convictions and highlighting the case as an example of the profound problems associated with the death penalty.

“I am proud to stand here today and say that we have corrected a grave injustice, and that we have vacated this conviction of a man who would have otherwise died in prison,” Gascón said during the news conference.

LAIP launched at Cal State LA in August. Through the groundbreaking new partnership, LAIP’s team of experienced post-conviction attorneys work alongside faculty and students in the university’s California Forensic Science Institute and School of Criminal Justice and Criminalistics to identify and investigate cases of individuals with credible claims of actual innocence, and to litigate those claims where new evidence supports overturning a conviction.

“The Los Angeles Innocence Project at Cal State LA and others doing exoneration work deserve our support precisely because of cases like this one,” said William A. Covino, president of Cal State LA. “Society can’t return the years taken from Mr. Hastings, but we can commit to supporting those who work to free the wrongfully convicted.”

Covino thanked everyone who worked to exonerate Hastings, including the attorneys and staff of the Los Angeles Innocence Project at Cal State LA and Professor Katherine Roberts and the California Forensic Science Institute at Cal State LA.

The California Forensic Science Institute at Cal State LA, led by Roberts, worked with Hastings’ post-conviction counsel to secure a court order for the DNA testing of the newly rediscovered evidence at an independent laboratory. The DNA testing was funded by a grant from the Bureau of Justice Assistance at the U.S. Department of Justice.

The case against Hastings, who grew up in Compton, was entirely circumstantial, lacking any physical evidence tying him to the crime. Numerous alibi witnesses testified that Hastings attended a party in the Fairfax District neighborhood of Los Angeles the night the crime was committed, and that he did not leave the party until 3 a.m. or 4 a.m.

In his first trial in 1986, the jury could not reach a verdict, disbelieving shaky eyewitness identification evidence that erroneously tried to place Hastings in the vicinity of the crime. The District Attorney’s Office then retried Hastings and a jury found him guilty, but voted against imposing the death penalty, instead sentencing Hastings to life in prison without the possibility of parole.

“Unfortunately, this is not a unique case,” said LAIP staff attorney Ayesha Hussain. “Unreliable eyewitness identifications, faulty forensics, and overzealous prosecutorial tactics impact the vast majority of the cases we review. These are hallmarks of the criminal legal system—not exceptions—and not enough is being done to correct these errors and prevent them from happening again.”

The consequences of wrongful conviction are severe, LAIP attorneys point out. At 69 years old, Hastings will never get back the 38 years he spent behind bars.

“This case demonstrates the irreversible dangers of the death penalty,” said LAIP staff attorney Eliza Haney. “Had Mr. Hastings been sentenced to death, he may well have been executed before this DNA evidence came to light. The number of innocent people in prison in the United States is estimated to be in the tens to hundreds of thousands, and the unfortunate truth is that the criminal legal system simply is not as accurate or reliable as we believe it to be. We must have greater transparency in criminal investigations, higher standards for the evidence presented in criminal trials, and greater accountability for prosecutors and law enforcement officials.”

Mitchell and her team of post-conviction attorneys were first connected to Hastings by another exoneree and former client who was wrongfully convicted, Andrew Wilson. As the founding donor of LAIP, Wilson said he is proud to support the work that has gained Hastings his freedom.

Before he was released from prison in 2017, Wilson befriended Hastings and learned of Hastings’ commitment to proving his innocence. They worked together for years in the prison laundry.

“Just to see him home,” Wilson said, looking across the room at Hastings in the media room at the Hall of Justice as tears welled up in his eyes. “That means the world to me.”

LAIP at Cal State LA is working with the Los Angeles District Attorney’s Conviction Integrity Unit to obtain a finding of factual innocence from the court for Hastings.

Hastings received assistance from many people during his decades-long fight to secure his freedom, including attorneys from the California Innocence Project, the Post Conviction Assistance Center and the Loyola Project for the Innocent. 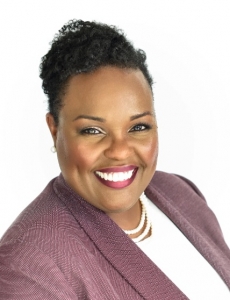 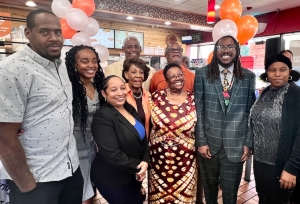 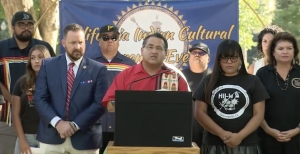 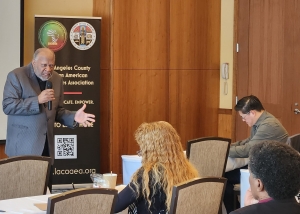