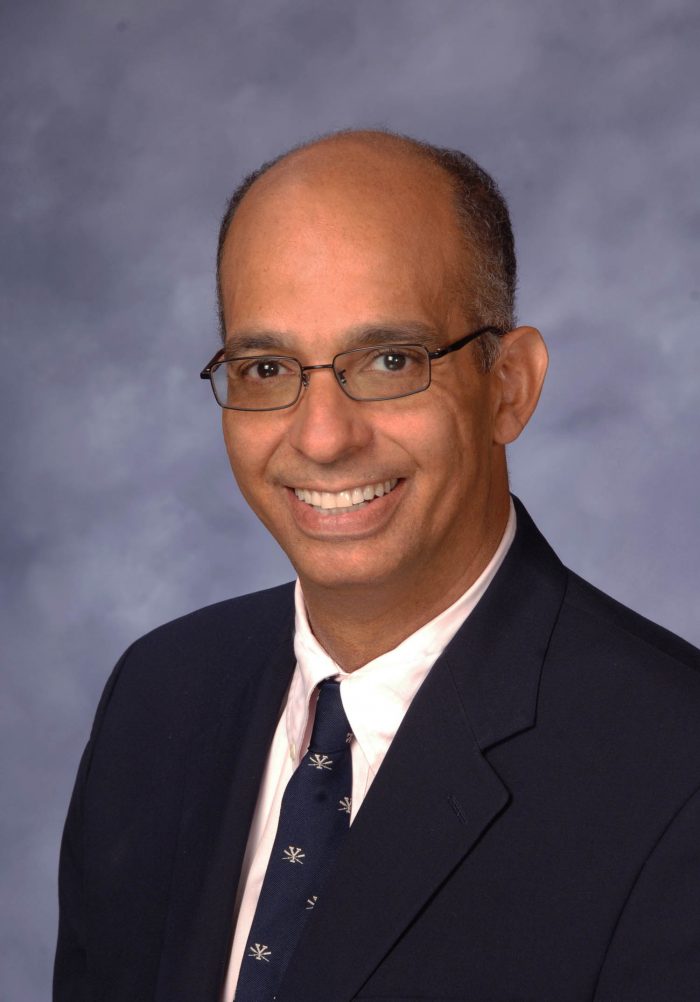 William Funderburk appears quiet and unassuming, but his actions belie that notion.  In fact, his defining leadership as a LADWP commissioner will positively impact communities of color for generations to come.

Funderburk, a nationally recognized environmental attorney, stepped down as commissioner this past June. But before leaving, he dedicated thousands of volunteer hours to ensuring that the agency can numerically track its array of services to determine if they are available to all citizens, regardless of income.

His work and effort resulted in the groundbreaking LADWP Equity Metrics Data Initiative, which provides geographic and demographic data to indicate how its resources are being distributed and utilized throughout the city.

“The equity metrics has focused renewed attention on funding additional customer engagement, policy development and outreach to increase participation in rebates,” explained Funderburk.  “We changed the rules forever for every person in L.A. and it’s up to the community to take advantage of the changes and rules.”

Currently, the 15 metrics being measured are in four main categories – the Water & Power Infrastructure Investment, which includes tracking water quality complaints and other operations; Customer Incentive Programs/Services such as turf removal rebates and the refrigerator exchange program; Procurement, which assesses the department’s purchases and engagement with small and minority-owned businesses through its SBE/DVBE Program; and Employment, which gauges hiring and promotion demographics.

DWP began reporting on the metrics in 2017 and Funderburk said about 35 more areas will be considered in the future “as LADWP invests billions in aging infrastructure and renewables and clean energy mandates.” The tracking of how these dollars are spent and the goal of insuring that every community benefits from these investments can create groundbreaking benefits for historically underserved communities. 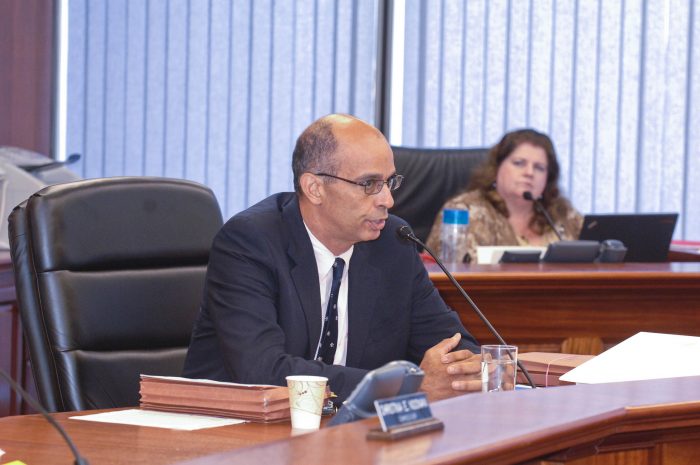 As a LADWP commissioner, Funderburk focused on fair-ness and equity for all citizens. (LADWP Photo)

“DWP’s power system and grid are undergoing tectonic change — more in the next five years than in the past 50 years.  Making sure that the ‘small guy’ is not left behind is now an embedded priority,” said Funderburk.

“The ‘small guy’ and left-out are disproportionately Black and Latino, even though the cohort includes poor Whites, single moms, certain Asian groups, the elderly and indigenous [people].

“Doing things fair and equitably doesn’t have to be a social, charitable giveaway. It can be economically beneficial, just as diversity is more beneficial, because you’re increasing the available pool of the workforce or supply chain and you can get more for what you end up paying for, whether it’s labor or goods or services,” he noted. 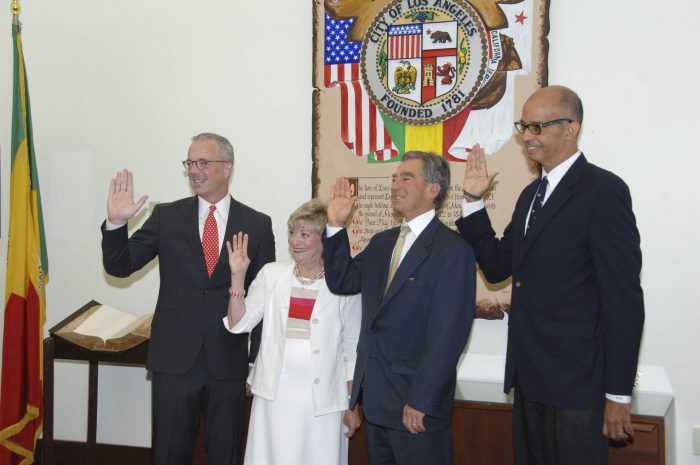 Funderburk’s deeply held belief in fairness, equity and economic empowerment stems from his family history of people with similar principles. His parents, grandparents and other relatives played a significant role in shaping his commitment to social justice.   Also, he was very close to his late uncle, the Rev. Dr. James Hargett, a renowned civil rights advocate who served 11 years as pastor of the Congregational Church of Christian Fellowship in Los Angeles.

“Uncle Jim was Rev. Dr. Martin Luther King, Jr.’s west coast convener of SCLC and he was active in the Civil Rights Movement from 1958 to 1969. My cousin, Mario Cooper, was a leading AIDs/HIV activist and the White House Gay and Lesbian Task Force leader through the 1990s,” Funderburk said.

“My people were always rich in spirit and in soul, but never rich in money. But, they encouraged me, they motivated me, they gave me the inspiration to do things in my own way and DWP gave me the opportunity, the bridge to my past,” said Funderburk. 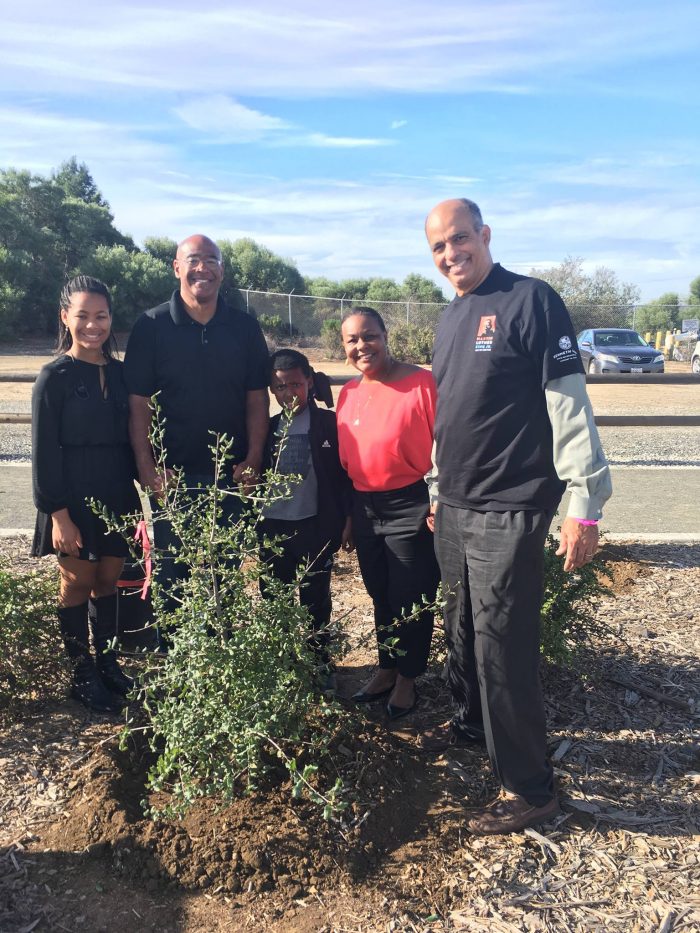 It was also through his DWP tenure that Funderburk led a range of efforts to improve the agency and the city through his stewardship of the Owens Valley dust control project, his support for opening the La Kretz Innovation Campus, which focuses on clean technology development, and his push to accelerate local storm water capture projects to reduce reliance on imported water.

Mayor Eric Garcetti and Funderburk’s DWP colleagues acknowledged his environmental leadership at the June 26, DWP Commission meeting. While his intelligence was lauded, his passion for fairness and equity was praised as well.

“You pushed all of us to be more inclusive, more aware and at the same time, you are a responsible and admirable leader,” the mayor wrote in a letter.

“Bill exemplifies the most important values in life. He’s a champion of the underdog…and personifies social justice.  He is always fighting for the little guy or gal. He throws himself into whatever he does with great passion and wisdom. I can’t think of anyone I’d rather have my back,” said Commission President Mel Levine.

Commissioner Jill Banks Barad added, “Bill is so principled. He does things for the right reasons. He doesn’t showboat or promote himself. He has humility.  He was there for the underserved communities throughout Los Angeles.”

Summarizing his time as a commissioner, Funderburk said, “I was glad to be able to empower people who otherwise normally wouldn’t be empowered such as Betty Radcliff in Reseda, who lives on a fixed income; Matt Shorty, who is with the Watts Neighborhood Council, and people with coalitions that largely represent under-resourced communities.

“I tried to balance the needs of the community with the needs of companies. I tried to do it full throttle.   It was a great experience. I wouldn’t trade it for anything!”