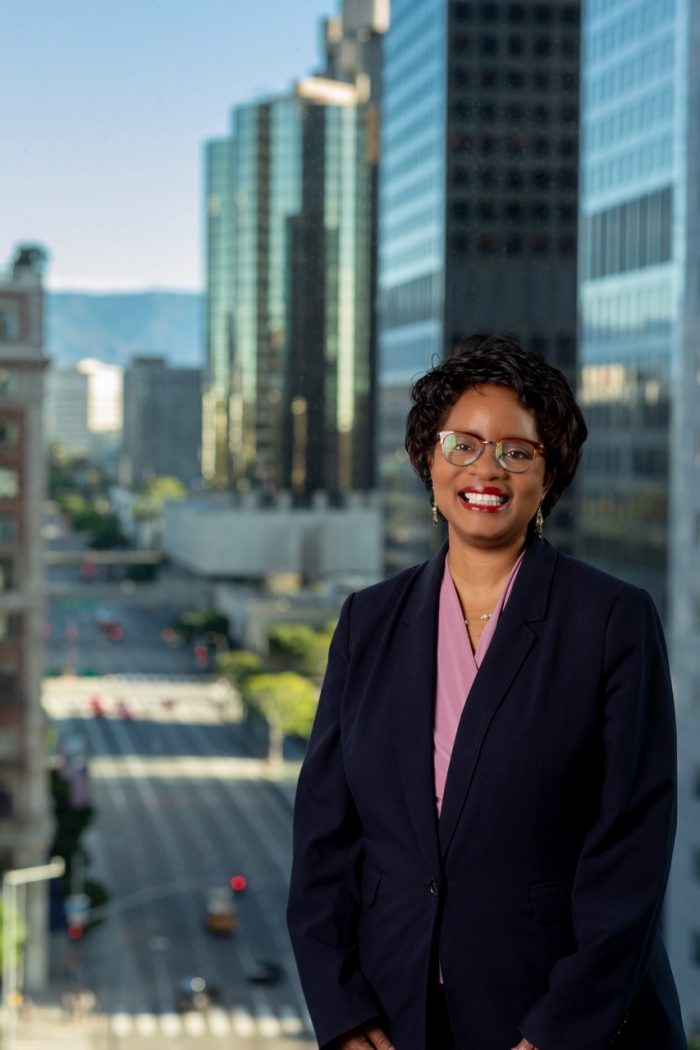 Stephanie Wiggins has always believed she could reach her goals. After all, her parents always told her, “You can do anything you want if you try.”

Undergirded with that philosophy, Wiggins applied for the CEO position of the Metrolink commuter railroad in December 2018, and of course, she got it.

As the first African American and first female to hold the agency’s top spot, Wiggins is well prepared to take Metrolink to the next level as a popular and viable regional transportation option.  Starting her career with the San Bernardino County Transportation Authority, she moved after four years to the Riverside County Transportation Commission (RCTC) where she rose through the management ranks to regional programs director, overseeing transit, commuter rail, rideshare, goods movement and rail capital projects.

Her assignments were bigger and more demanding when she next joined the Los Angeles County Metropolitan Transportation Authority (L.A. Metro). Assigned as executive officer and project director the Congestion Reduction/ExpressLanes Program, Wiggins once again relied on her mantra of achieving success if she tried.

“In my career, I have always been the one to do assignments that are not as attractive or more difficult,” said Wiggins.  “But, I see challenges as opportunities and my opportunity at Metro did not come from assuming an easy job. It was to turn around a very controversial project and I worked with a team to turn that around”

As a result, Wiggins successfully launched the first high occupancy toll lanes in LA County, the I-10 and I-110 Express Lanes, which improved travel times and travel reliability on two of the county’s most congested freeway corridors.

Some of the other high-level jobs Wiggins held at Metro included executive director of Vendor/Contract Management, and most recently, deputy CEO, which called for working closely with CEO Phil Washington in planning and executing strategic public transportation objectives. In fact, it was Washington who suggested that she consider the Metrolink CEO position.

Recalling the conversation, Wiggins said, “Phil is truly a servant-leader and believes in development of his people. The last couple of years at my performance evaluation, he’d tell me, ‘You’re ready to be a CEO and I want you to start interviewing so you are ready.’

“I said, ‘This is the CEO job that people retire from, not start at.” He replied, ‘Maybe that has been the problem.’ So, I thought I’d give it a try and through that process, he was an incredible champion,” Wiggins said. “The faith and support that he and others had in me made me believe I should put my hat in the ring.”

Unanimously voted CEO by the Metrolink board of directors, Wiggins started at the agency in January and immediately laid for groundwork for her vision of elevating the agency, which operates a commuter rail network on seven routes across a six-county, 538 route-mile system. Her oversight also includes 275 employees and a $793 million budget.

Among her goals is raising the profile of the train, with particular emphasis on its ability to improve the quality of life for people residing on the edges or outside of L.A. County, yet working at businesses in the city. Metrolink, according to Wiggins, is the nexus to good jobs and affordable housing.

“Metrolink is at a stage where it can be very transformative for the region. I like to say that Metrolink connects people to opportunity every day. It’s a different type of opportunity,” she explained.

“When you think about the housing crisis, how to grow the middle class, how to be attracted to higher paying jobs, Metrolink has been the secret to making that viable for lots of Los Angelinos,” insisted Wiggins, who said that the train’s ridership profile indicates that 80 % of Metrolink riders work in L.A. County.

“Because that’s where the higher paying jobs are. Sixty percent are traveling from one county to another to work.  And when you overlay our system map with where the affordable housing is, it’s in the Inland Empire, Antelope Valley, and certain aspects of Orange County,” she said.

“A lot of people have been pushed out for affordability to Moreno Valley, Lancaster, and Victorville and Metrolink is a viable alternative for them to be able to maintain that higher paying job here.”

Another Metrolink advantage that Wiggins stressed was the time saved by taking the train. Recent surveys revealed that riders save an average of 30-to-45-minutes in rush hour traffic compared to driving for up to two hours to the same location.

“The number one reason people try Metrolink is to avoid the traffic.  The second reason is lowering stress. When you’re not driving, we have nice comfortable seats where you can do work, read, watch movies, some people sleep and we have a quiet car on each of our trains,” said Wiggins.

The train offers various amenities as well including clean restrooms, security courtesy of the L.A. Sherriff’s Department and charging outlets and USB ports on certain seats.  Future plans call for Wi-Fi access in all of the cars. Also, discounted fares, from 10-to-50 %, are available to youth, college students, seniors, disabled and active military passengers.

In addition, Metrolink has embarked on a major capital investment in its infrastructure as part of its $10 billion Southern California Optimized Rail Expansion (SCORE) Program, a plan designed to improve regional rail to run 15-minute and 30-minute train service in time for the 2028 Los Angeles Olympic Games.

“We now know, to be relevant to more of the population, we have to have more frequent service.  I see Metrolink as a complement to the transit system. We’re an eco-system of transit,” Wiggins said, who encouraged people to try the commuter service and share comments with the agency.

Learn more about Stephanie Wiggins and Metrolink at metrolinktrains.com