Donald Trump’s presidency has raised many questions concerning his competence, racism, white privilege and what it means to be white in America. Trump is dangerously narcissistic and his performance to date signals a scary, if not catastrophic, future for the country.  But hand-wringing and loudly denouncing him are not sufficient. The public conversation must go much deeper to include the need for moral and ethical values as opposed to individualism and materialism as foundational for real change.

Erin Aubry Kaplan’s op-ed, “A new reckoning for whiteness,” (LA Times (August 25, 2017) follows in its entirety because it offers a penetrating analysis of the meaning of whiteness and what white folks must reckon with to bring about real change.

“At the risk of sounding like I agree with Donald Trump, I have to say that his empathy with and unapologetic embrace of white supremacy has had its good points.  I don’t mean that he is correct—the barely disguised racist attitudes in his pugnacious “both sides” are to blame remarks and his hand-wringing over the removal of Confederate statues are wrong.  But in the prolonged aftermath of Charlottesville, Trump’s obstinacy is forcing white Americans across-the-board to grapple with a crucial question:  What does it mean to be white?

That is, what does it really mean?

You may think that among well-intentioned Americans, this is a non-issue, what with all the generally affirmative talk about wokeness, white privilege and Black Lives Matter.  You may think that as long as most white people can identify the white supremacists in Charlottesville, Boston and beyond, there’s little to discuss here.

But what I’m getting at is different from those things.  It’s certainly related to “white privilege” and “white supremacy,” but it’s also less abstract, more basic.  Parsing the meaning of being white is a personal reckoning, one white person at a time, and because it’s so personal, it’s unsettling, rarely addressed, at least in a public way.

It requires individual answers to intimate questions: How do I feel as a white person?  What advantages do I take for granted based on my skin color?  How do I see non-whites?  Or do I see them at all?

For a long time, since the fire hoses and attack dogs of the civil rights era, whites have had the luxury of avoiding those questions.  Broadly speaking, when “whites only” signs and other protocols of racial separation disappeared from daily life, whiteness kept its dominance, but it was untenable to say so.  Whiteness went from being loudly asserted to being almost invisible, and assumed “neutral” standard, against which all other ethnic groups were defined and understood, a still unquestioned racial norm.  Or put another way: whiteness was a problem, but white folks weren’t accountable for it.

Now, catalyzed by a tumultuous week, that has changed.  Whites suddenly have to locate themselves on a continuum:  Are they even a little bit neo-Nazi or Klan white (Richard Spencer, David Duke), Donald Trump white (some racists are “fine people”), liberal but white (that is, pro-diversity but anti-affirmative- action or pro-diversity but OK with gentrification), laissez-faire white (black problems don’t affect me, so enough said), and so on.

For Black folks, watching this self-examination is vindicating.  All my life I’ve been pressed to answer questions posed subtly and not so subtly by white people:  What sort of Black person are you?  Middle-class or ghetto?  Articulate or down-home, educated or irrational, bourgeoisie or radical?  ( What they really wanted to understand was the measure of my whiteness, how I stacked up against the norm.)  Now, with the magnifying glass turned, it’s been almost fun seeing people like Senate Majority Leader Mitch McConnell and House Speaker Paul Ryan forced not just to repeatedly identify and repudiate white supremacy, but to somehow distinguish them from the members of the Republican Party.  (Too often, it can’t be done.)

So I’m relieved Trump has been standing his ground.  I’m glad he can’t or won’t clearly condemn the bad apples and give his party the cover that white people have relied on to maintain their racial anonymity.  Not that anybody would believe Trump if he did consistently say the right things—we’re way past that with this guy.

But even a presidential president assuring us one more time that we’re within reach of a racial ideal (Obama, anyone?) would  revalidate the anesthetizing whiteness norm, instead of forcing a confrontation with the spectrum of white attitudes that constitute and sustain racism.  A presidential president would let white folks off the hook and keep us from truly forming a more perfect union.  With Trump in charge, no one can indulge in the illusion of togetherness.  He’s disrupting a surface that needs to be disrupted for good.

Pundits are saying Trump has finally lost his moral authority.  Of course, he never had any to begin with.  His party stood aside and allowed, sometimes encouraged, his racist proclivities as he exploited the hate-filled anti-Obama birther movement.  That movement clearly told us what kind of white person Trump was, not that most Americans wanted to know.  Now we do.

Now we are witnessing whiteness up close and personal—not as an abstract concept or the neutral norm, but as the words, deeds and feelings of individual people.  Who and what will they turn out to be?  The future of all of us depends on the answers.” 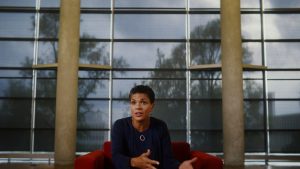 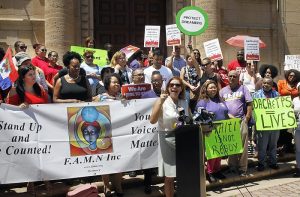 Tribute To Harriet Tubman Is A Step Forward; Abandoning Plan Would Be A Gra...