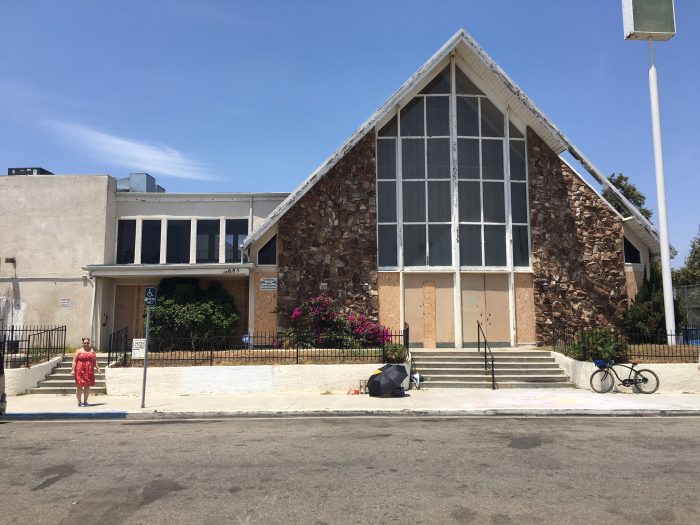 A simmering battle is underway in Venice as advocates strive to prevent replacement of the historic First Baptist Church with an 11,000 square feet residence.

The dispute stems from sale of the building by the church pastor and officers in February 2017 for a price of $6.3 million.  The new owners, listed as 685 Westminster Holdings LLC, aim to convert the now-boarded-up two-story, 12,311 square-foot church into a two-story, 11,760 square-foot single-family home, according to L.A. city planning documents.

The applicant on the change-of-use form is listed as multi-millionaire Jay Penske, the owner of Variety, Deadline and several other media publications.

News of that proposal drew emotions from outrage to sadness from among Venice’s Oakwood community and elicited vows from residents to fight the project, which some consider as an attack to obliterate the contributions of African Americans to building the area.

First Baptist Church was organized in 1910 by Blacks, who were confined to living in Oakwood due to Los Angeles’ racist housing covenants at the time.  Many of its African American residents provided the labor for Venice founder Abbott Kinney to build the community.

The original edifice was constructed about 1928 and after the congregation outgrew it, they erected the current structure in 1968 and used the original site, located across the street from the church, as a parking lot.  Over the years, First Baptist has served as a place of worship and a center for community activities for generations of African Americans.

However, the application to change the facility from a church to a residence has not been well received by those who still live in the neighborhood and underscores the fears of the gentrification echoed throughout minority communities across the city.

“We don’t want the historical contributions of African Americans in Venice erased through the gentrification efforts and people who come and buy property and change it into something that eradicates the history and footprint of the contributions of Black people in that community,” said Naomi Nightingale, an Oakwood resident whose family has lived decades in the area.

“This is the first Black church that was built in the Venice community and it still stands as a structure and it can still be an image and representation of what Black people have done,” added Nightingale, who is working to obtain a historical cultural designation to preserve the building.

Offering similar comments, resident Laddie Williams said, “[That church was built] 45 years after slavery ended and Black people migrated to California and they created a church because they couldn’t worship anywhere else.  The area was considered swampland.  So I commend them to put enough money to buy this property here.”

Both Williams and Nightingale expressed disappointment in L.A. Councilmember Mike Bonin’s efforts to assist their campaign, but his spokesman, David Graham-Caso, insisted that Bonin “is strongly supportive of preserving the church building and acknowledging the significant African American history of the Oakwood neighborhood of Venice.”

Graham-Caso said Bonin has met with community members and the building’s new owners along with facilitating the discussions between them.  As a result, he said the owners have committed to “maintain the facade of the church building, create historic and cultural monuments to the neighborhood’s African American history, and provide other benefits to the community” such as allowing the potential community use of an adjacent lot on the property site.

“The owners have also preserved sacred elements of the church’s interior, and transported them to the congregation’s new church in Westchester at the owner’s expense,” said Graham-Caso.

While those actions may be admirable, they won’t deter the preservation advocates from pressing their cause, said Nightingale.  She and members of the First Baptist Church Support Group meet very Sunday on the church steps to pray and distribute literature about the status of the church.

The group is also challenging the owner’s request to change the property’s classification to residential. A hearing on the matter will come before the West L.A. Planning Commission on August 15, at 4:30 p.m., at 11214 Exposition Blvd., in Los Angeles.

“This issue has really brought the community together in a way that we haven’t been for a number of years, solidly behind the common cause of saving this church,” she said. “I’m not opposed to change, but what I am opposed to is the eradication of our contributions as if Black people never even lived there, as if there is not anything important enough to preserve, as if just because you have the money and inclination, that is all that is required to just remove a monument of religious stature.

“This is just another method of dispersing Black people from their own communities. There are a few of us left and we are standing our ground. Our intent is to win and leave that church standing.”