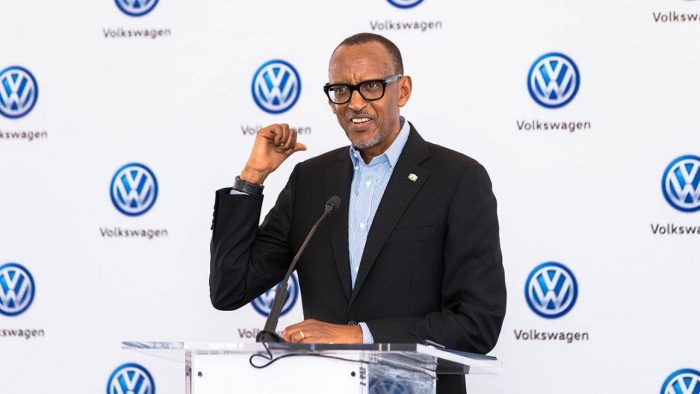 You’ll see plenty of Volvos, Mercedes, Hondas, Toyotas and even a Ford Windstar tootling around the booming cities of Lagos, Nairobi and Johannesburg.

But these foreign cars were no spring chickens when they arrived in Africa after years of use. Often they had to be totally rebuilt in order to sell at top dollar. Only six cars claim to be made in Africa but Asian origins belie that claim.

Now, at a launching ceremony attended by Rwanda’s President Paul Kagame, the first domestically built car has rolled off the assembly line at Volkswagen’s new factory in Kigali. With 5,000 cars envisioned for the first phase, VW aims both to sell cars and use them in the Uber-like car-sharing system.

The Polo is the first model being made at the site to be followed by the Passat, Tiguan, Amarok and Teramont models. The cars use components shipped from South Africa to Rwanda and will be more environmentally friendly than older models in terms of emission levels, VW says.

Last year there were 300,000 cars registered in Rwanda, a country of 12 million people, according to revenue authority records. Most of the cars were imported as used vehicles from Japan.

VW’s $20 million investment will create up to 1,000 jobs, and is an example of much needed spending by overseas firms in the nation, which receives $1 billion in foreign aid and development assistance but is making business-friendly reforms.

“Africa does not need to be a dumping ground for second hand cars or second hand anything,” remarked President Paul Kagame in a veiled reference to a U.S. demand that Africa allow sales of second hand clothes, undercutting clothes of African manufacture.

Africa’s Free Trade Agreement which will enable cars to move freely from country to country without any tariffs was on the mind of VW Chairman for South Africa Thomas Schaefer. “Connecting the African brothers; Kenya, Rwanda, Nigeria, South Africa will create an African market of a billion people… You can walk away from exporting to America, exporting to Germany, what’s the point? You’ve got the market right here!”

A recent meeting with Schaefer and Kenyan President Uhuru Kenyatta has cemented a deal to build Polos and the mini Sports Utility Vehicles – their second venture in that East African country.