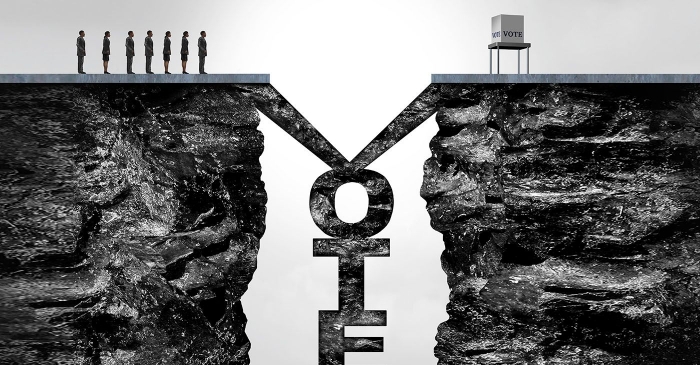 Numerous voter suppression tactics have been used in Texas and throughout the nation, added Patrick Washington, CEO, and co-publisher of the Dallas Weekly. (Courtesy photo)

The lines are long, but Black voters are demonstrating their will to vote.

In Texas, Georgia, Virginia, North Carolina, and Indiana, African Americans’ resiliency and resolve have never been as severely tested.

They have gone to great lengths to overcome voter suppression, discouragement, misinformation, gerrymandering, and so many other obstacles to participate in America’s elections.

In Georgia, NPR Reported that the clogged polling locations in metro Atlanta reflected an underlying pattern: the number of places to vote has shrunk statewide, with little recourse.

“Although the reduction in polling places has taken place across racial lines, it has primarily caused long lines in nonwhite neighborhoods where voter registration has surged and more residents cast ballots in person on Election Day. The pruning of polling places started long before the pandemic, which has discouraged people from voting in person,” the report noted.

In Virginia, a glitch shut down polls and forced officials to push back deadlines to cast early votes.

Also, General Registrar Donna Patterson told reporters that the long lines in Virginia Beach had been like that each day since early voting began about one month ago. Add to that number the 55,000 mail-in ballots the registrar received to that point.

Patterson noted that the state might have the highest voter turnout ever.

In North Carolina, about 163,000 votes were cast in person across North Carolina on Saturday, bringing the total to 828,456 in the state — more than double the number of people in North Carolina who went to the polls at this time in the 2016 election.

“Texas has been under siege confronting voter suppression from multiple fronts from our Governor Greg Abbott to the state higher courts,” noted Sonny Messiah Jiles, the publisher, and CEO of The Houston Defender Media Group, DefenderNetwork.com.

“It is unbelievable or ridiculous for a county with 2.4 million registered voters to have one location to drop off mail-in ballots,” Jiles remarked.

“Despite their efforts, the Harris County Clerk Chris Hollins, a smart young millennial, has been strategic and innovative with drive-thru voting, doubling the early voting locations and the historical move of 24-hour voting. But aside from voting access, we need to beware not to be bamboozled listening to the polls and just go and vote like our life depends on it, because it does.”

Numerous voter suppression tactics have been used in Texas and throughout the nation, added Patrick Washington, CEO, and co-publisher of the Dallas Weekly.

“Like the late-night ruling, from a 5th Circuit Court via a three judge panel, all of whom appointed by President Trump to uphold Governor Abbot’s mandate to limit one ballot drop box for millions of voters in Dallas county,” Washington observed.

“Despite this deliberate, detrimental move, the night before early voting in Texas, I am pleased to see that the very voters that may have been affected in Dallas counties came to the polls big.

“I witnessed many volunteers at the Martin Luther King Center assisting the elderly with remaining comfortable with chairs and water during the long wait and assisting first-time voters by explaining the sample ballots. To know that ballot records are being broken in counties all over Texas doesn’t shock me. Unfortunately, a lot of tragic events due to racism and police brutality have occurred during Trump’s time in office.

“People are tired. People can’t see family and friends like they used to. In some cases, people are unemployed, angry, scared or maybe all of the above. So, in any case, people have the time to exercise their civic duty and vote.”

Even in states like Indiana, voter suppression efforts haven’t stopped Black people from lining up at the polls.

“Indiana has some incredibly restrictive voter laws, and currently we only have one early voting site in all of Indianapolis,” stated Robert Shegog, CEO at the Indianapolis Recorder Newspaper and Indiana Minority Business Magazine.

“A few more will open Oct. 24, but significantly more are needed given the size of the city. However, it is very refreshing to see so many people voting early. This has been a trend in Indianapolis for over ten years now, and the numbers keep increasing,” Shegog noted.

This year, Indiana voters are expected to break the record again.

“When one considers the pandemic and the physical and mental effects it had on so many Hoosiers, the tough voting laws, only one early voting site in a city that is nearly 400 square miles, and even the immense pressure that Blacks experience daily; the fact that so many people are voting early demonstrates their desire to have their voices heard and their votes counted,” Shegog said.

“I am incredibly proud of the numbers, and local experts are optimistic that they will continue to increase through Nov. 3.”