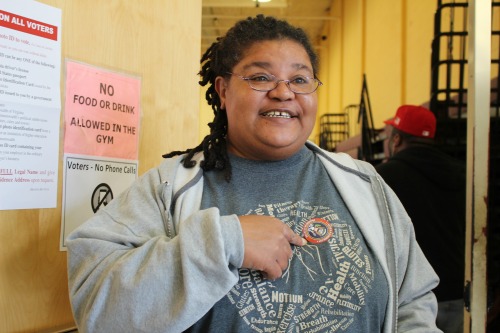 Terry Garrett is one of 60,000 Virginians who have served their time for felony convictions who was be able to vote on Tuesday, following efforts by Democratic Gov. Terry McAuliffe. (Jazmin Goodwin)

Every Election Day for nearly 30 years, people have told Terry Garrett, that she couldn’t vote. Garrett was convicted of a felony for shoplifting at 18 and was stripped of her right to decide which people governed her community, her state, her nation.

On the cold crisp morning of Nov. 8, 2016, Garrett, the mother of four, made her own personal history.  She walked from her house three minutes to the Charles Houston Recreation Center down the street with two of her daughters, Iterria Garrett and Candace Garrett, and voted the first time in her life.

She said she hoped to make American history by helping elect the first woman president.

“I am so happy that I could vote along with my two daughters,” she said.  “They always vote, and now I can vote with them and get my ‘I Voted’ sticker.”

Garrett is one of 60,000 Virginians who have served their time for felony convictions who were able to vote on Tuesday, November 8 following efforts by Democratic Gov. Terry McAuliffe.  The Virginia Legislature and the State Supreme Court struck down McAuliffe’s earlier effort to restore voting rights to 200,000 former Virginia residents convicted of felony crimes.

Garrett said she wished the nation would get behind the efforts to allow ex-felons the right to vote.

“Just let us vote,” she said. “We are people, we make mistakes, and we acknowledge that.”

According to Garrett, the road to the revocation of her voting rights began early with years of incarceration and brushes with the law.  She said she started drinking at age 7. She began rebelling, smoking weed and running away to escape problems at home at age 12.  She had her first child at 16 and by age 20 had developed an addiction to crack cocaine.

Her road to redemption and gaining her restoration to vote after a long battle of drug addiction and crime was not an easy one, she said.

“The last time I was arrested, I knew I had to do something different or I was going to die in addiction,” she said.

Following her last incarceration, she said, she applied to Friends of Guest House, a women’s reentry program in Alexandria that led her to the support she needed to get her rights back. 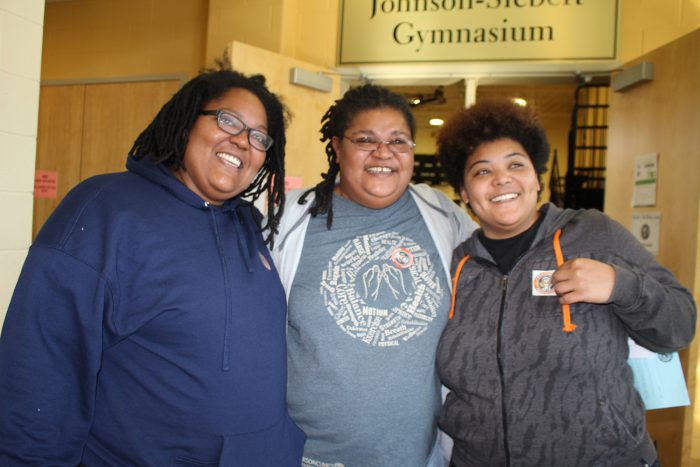 With seven felony convictions, the roadblocks to Garrett’s right restoration were significant, due in part to fines and she was still under probation for her offenses.

“In the beginning, I didn’t know committing these crimes and getting these felonies were going to affect me in this way,” Garrett said.  “It was never explained to me by anyone until I was 38 years old that this is what felonies can do to your life.”

According to the Brennan Center for Justice at New York University School of Law, more than six million American citizens are unable to vote because of a past criminal conviction.

It took Garrett five years just to qualify to apply, and then her request was rejected twice.

“I believe everyone should have the right to vote. You have a voice. The only way your voice can be heard is through those numbers in that booth when you vote,” said Garrett.

Garrett said she hopes others like her will be able to someday exercise a right that was taken away from them.

“Even though we’ve made mistakes, we have a voice,” she said.  “We’ve been told for so long that we don’t count and a lot of us still feel that way. Let your voice be heard and get your rights back.”