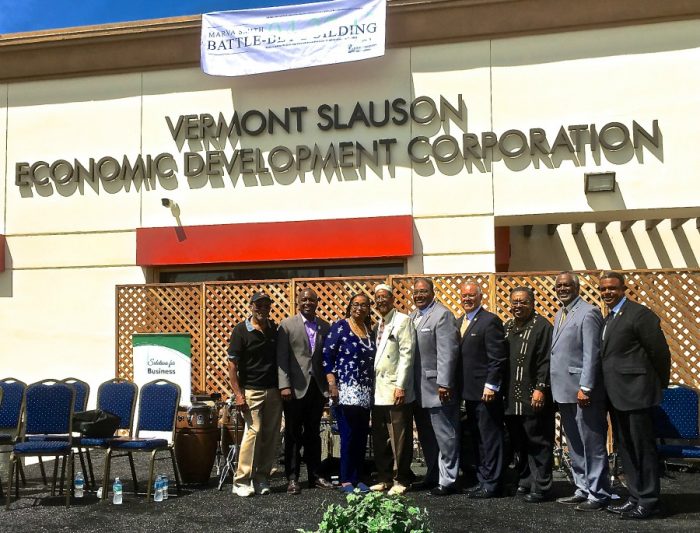 Optimism and energy streamed throughout the crowd gathered on April 27, to celebrate the 35th anniversary of the Vermont Slauson Economic Development Corporation (VSEDC).

The occasion not only marked the organization’s years of service in South Los Angeles, but also recognized the enduring legacy of its founder, the late Marva Battle-Bey, by placing her name at the entrance of the VSEDC headquarters.

Under the nurturing and direction of Battle-Bey, VSEDC grew from a small organization to a major community-based nonprofit responsible for $60 million in economic development projects and more than 3,000 jobs in South L.A.  The group’s efforts played key roles in the construction of Western Slauson Business Center, Vermont Slauson Shopping Center, and Central/Florence Avenue Villas.

VSEDC Board President, William Holland, added another defining moment to the celebration with the introduction of Joseph T. Rouzan III as the new executive director.

“There will never be another Marva Smith Battle-Bey, but I do plan to lead this organization in a fashion that will make her proud by creating economic and career opportunities throughout Los Angeles, particularly, South L.A.,” said Rouzan, who has wide-ranging skills and knowledge in community and economic development.

Councilmember Curren D. Price joined Councilmember Marqueece Harris-Dawson and Council President Herb Wesson in vowing to champion the efforts of Rouzan and VSEDC, in providing enhanced economic and business services.  Price commented that, “VSEDC reflects the vision and determination of the New Ninth,” alluding to his ongoing campaign to revitalize his council district.

“This organization serves all of us – Council Districts 8, 9 and 10.  That’s why myself, Wesson and Price are here – to celebrate the rebranding of this institution that has really laid the groundwork for what I think will be a renaissance of jobs for African American in Los Angeles and Los Angeles County,” said Harris-Dawson.

“So, we want to do everything we can to put this organization in position to get our people on the front lines for all of the jobs that are coming,” he added.

Following Rouzan’s remarks, Brian Grant of City National Bank closed the program to cheers and applause as he presented VSEDC with a $50,000 donation from his firm.