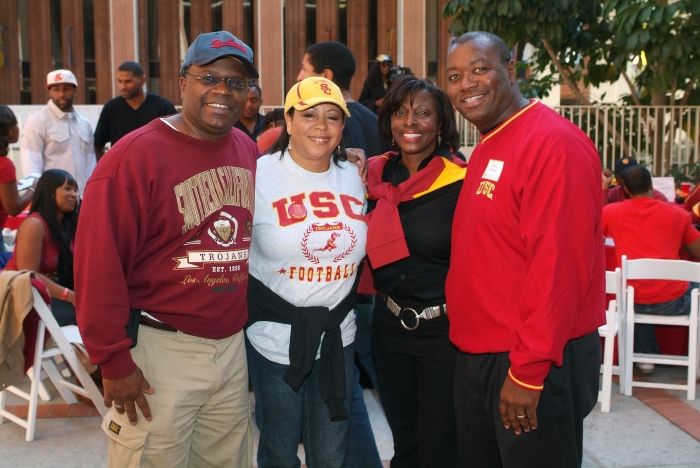 At the center of USC’s campus on Saturday, hundreds of Black alumni, current students and faculty will gather at the USC Black Alumni Association’s 35th annual homecoming celebration in what’s being called “Trojan Legends 35”.

“For us, I think this tailgate has come to represent the largest converging of Black alumni at USC,” remarked Dr. Michele Turner, executive director of the USC BAA.

At the helm of the BAA, Dr. Turner has continued to elevate the Black homecoming experience that began in 1984 with six former students: Allen Herbert, Joann Morris, Mark Shaw, Cheryl Dorsey, Anna Maria Hall, Patrick Holloway. What was once a picnic in front of Doheny Library organized by the aforementioned, has now become an event where Black alumni fill up an entire pavilion on campus.

“I think the optics are important as well as stunning because what you’ll see is up to 800 people celebrating at VKC, yet the everyday circumstances of student life here at USC would never reveal to you that there is a critical mass of Black Trojan alumni,” stated Dr. Turner. 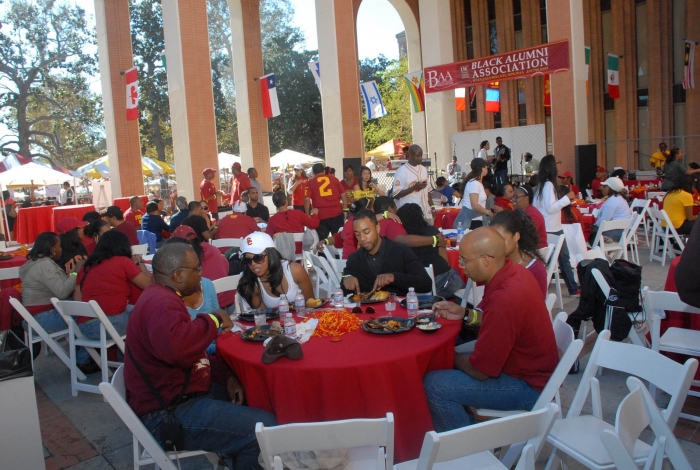 The tailgate features food from Dulan’s Soul Food Kitchen, a hosted bar and a sports lounge to watch the game. The celebration has a dance floor while also providing opportunities for current students to network with alumni and learn about the various Black Greek and professional organizations.

The BAA programming slate around USC homecoming extends beyond just the tailgate. Leading up to the pre-game tailgate, the BAA will kick off the Trojan Legends weekend with a “Cardinal and Gold” mixer at Lucky Strike L.A. Live on Friday evening from 6-10 p.m.

The growth that the tailgate has seen over 35 years is concurrent with the growth of the BAA as an organization overall. It continues to be an event that alumni like Dr. Turner look forward to and has even in ways become a family tradition since she graduated from USC along with her husband in 1981.

“From the time that our children were small, we would bring them to homecoming and this would be the place that they would certainly see their aunts, their uncles,” Dr. Turner recalled. “They’ve grown up with USC, with this homecoming at the heart of that connection to USC, so for me this homecoming has always been a very personal space.” 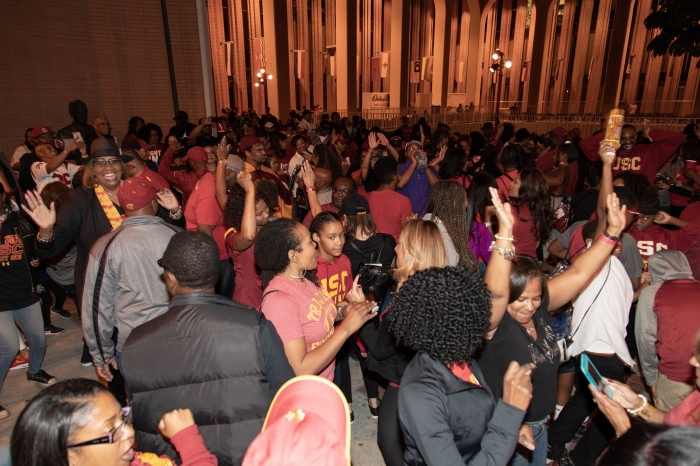 The BAA was founded in 1976 by Rev. Dr. Thomas Kilgore Jr. It provides up to 150 scholarships annually valuing in nearly $500,000 to undergraduate and graduate students. The initiatives are vast and include career mentoring and cultural advocacy through alumni networking, volunteer involvement, philanthropy and social enterprise.

She did point out that while she is proud of the resources and development the BAA has produced, that low-enrollment levels of Black students at USC continues to be a battle she works towards solving.

“It’s great for students to see, ‘Wow, there are Black Trojans. I’m surprised at how many of them there really are,’” she stated. 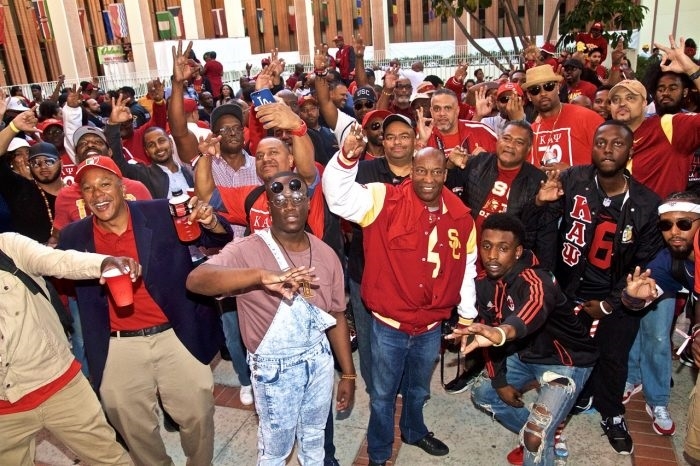 Members of Kappa Alpha Psi Fraternity Inc. pose for a photo at the annual USC BAA homecoming tailgate on the campus of USC. (Courtesy USC BAA)

This year’s honorary chair is the late John Singleton, who was an Oscar-nominated director for some of the most critically acclaimed movies that focused on Black stories in South Central Los Angeles like “Boyz In The Hood,” “Poetic Justice” and “Baby Boy.” He was the youngest person to be nominated for an Academy Award for Black director and his untimely death in April of this year left the entire USC community deeply saddened.

“He never forgot where he came from,” started Dr. Turner. “Not just his neighborhood, but the university who helped him create, who poured into his journey and because of that he was always paying it forward with students and other aspiring young creative minds,” she continued. “He was fun. He was down to Earth and he was just John. That’s the John we remember.”

The annual homecoming event is a way to highlight the community of successful Black professionals USC continues to produce all while encouraging the next generation of Trojans. Fight On!