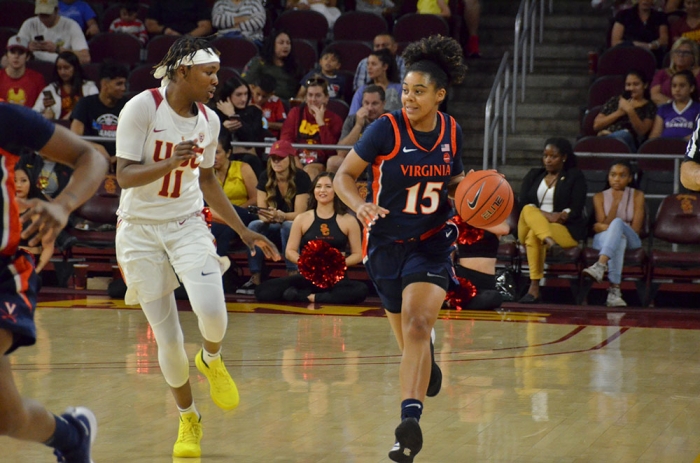 The USC Women’s basketball team started their homestead on a high note with a 59-49 victory over the Virginia Cavaliers.

During the game, USC honored Naismith Basketball Hall of Famer Tina Thompson by retiring her No. 14 jersey.  Thomspon is in her second year as head coach of Virginia, finishing last season with a 12-19 overall record.

“This is such an honor,” Thompson said to attendees during her jersey retirement ceremony. “Being a USC Trojan is in the fabric of who I am.”

The last time USC and Virginia clashed was in 1995, when Thompson was a junior at USC. The then nationally ranked Cavaliers defeated the Women of Troy 78-68. 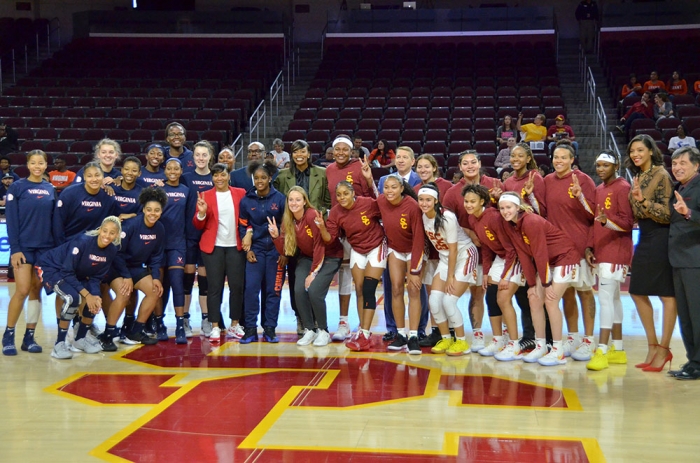 The USC women’s basketball team has many new additions with eight players fighting for the Trojans for the first time. Finding chemistry comes from building trust during and outside of gameplay.

“We’re building the chemistry by working together in practice, keeping each other up whenever somebody gets in trouble and just buying into the system, trusting each other,” said USC frehman guard Kyra White.

The starting lineup for USC consisted of four freshmen, sophomore Desiree Caldwell was the only familiar face; she ultimately scored 11 points and five assists.

Although they did not score from beyond the arc much, USC made plays to stay ahead the Cavaliers. The Women of Troy found a four-point run in the second quarter. Freshman guard Endyia Rogers hustled to get seven points by the half.  The Women of Troy worked to keep the Cavaliers from getting many shots. Viriginia was only able to add nine extra points.

USC return from halftime with a three-point lead. Free throws by Watts and freshman guard Endyia Rogers helped USC pull away from Virginia. Jablonowski and senior guard Dominique Toussaint combated against the Trojans. Although the Cavalier found a 10-2 run, but USC kept executing on offense. 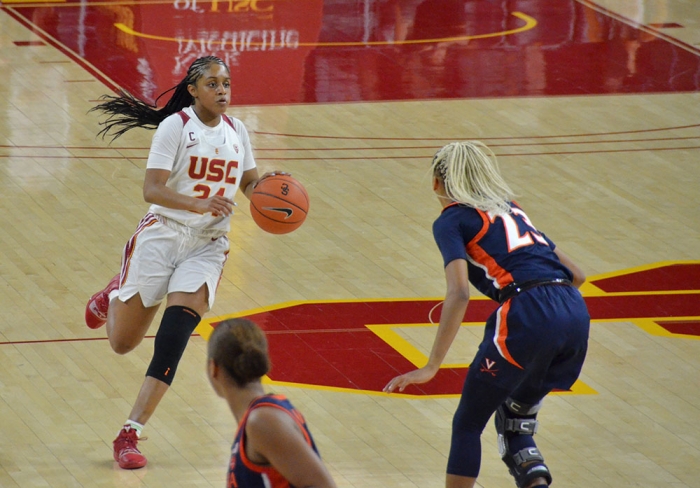 Jackson worked to execute the game through hitting her free throws. She ended the afternoon with nine points. The Women of Troy had a defensive mindset, making 13 blocks; they also secured a win with only three three-pointers.

USC will travel on November 14 to battle UC Riverside at 7:00P.M.