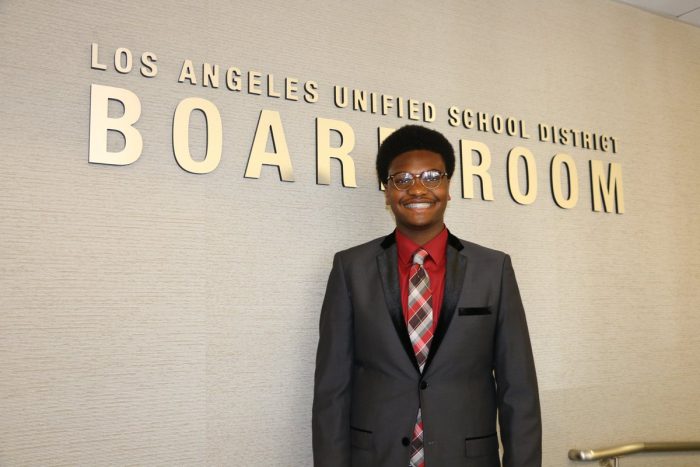 At a young age, Tyler Okeke was empowered by his parents’ who are Nigerian immigrants, and their story of social mobility and overcoming adversity. This later inspired him to get involved in public service so that he could make an impact in the country for the people who come after him.

In August 2018, Okeke was elected to serve as Los Angeles Unified School District’s(LAUSD)student board member for the 2018-19 school year.
Okeke first heard about the position from one of his teachers at Harbor Teacher Preparation Academy who prompted him to apply.
“There is this amazing teacher at my school, her name is Dr. Turner and she teaches A.V.I.D which stands for advancement via individual determination and it is kind of dedicated towards helping students apply for college. When I was an 11th grader, she personally sent an email to me and was like,‘Ithink this is perfect for you.’”
When asked why he chose to get involved in politics now instead of waiting until after he attends college. Okeke simply replied:
“I leaped at the opportunity to be a student member on the board because people who are in need, and the people who need the most empowering, the people who need effective leadership cannot wait so I think that is kind of what energizes me to do things now instead of waiting,” he said.
Okeke stepped into this position in August of 2018. Since then, he has voiced his concerns on school safety in regards to gun violence and encouraged students to register to vote.
“I like to see my position as sort of an elected lobbyist, so I was elected by the students of LAUSD to lobby on their behalf,” said Okeke.“Ithink that is important because we have a lot of stakeholders in our district. We have parents, teachers, and district employees and it is easy to get distracted by other stakeholders so it is important for students to have a voice to keep the district in line to and to keep the district grounded and that’s what the district was founded to do, which is to serve students.”
Aside from being a student member on the LAUSD board of education, Okeke has also had the pleasure of interning with assemblyman Mike Gipson who covers Compton, Watts, Gardena, Carson as well as other areas of Los Angeles in 2017.
“The most important thing I learned from interning at his office wasn’t how to be an asseblymember. It was what to look for in a team. The people who are on his team support him and they are not his staff they are his teammates and they have his best interest in mind and they are all about serving their community. Those are the type of people I want to surround myself with when I consider things like running for office.”
Okeke’s accomplishments don’t end there. He has also involved in the California YMCA’s Youth and Government Program for the past two years. Through the California YMCA Gardena delegation Okeke has been able to serve a member of the California Investment Bank where he is as an authority member.
“I think the most important thing about the California YMCA program is that it kind of gives you a glimpse into what our future is going to look like with leaders who are young and energized,” said Okeke.“Wehave our conservative youth, we have our liberal youth but we all work together to make sure that we are providing equitable legislation that serves everyone to the best of its ability.”
Currently, Okeke is in the process of applying to private institutions as well as UC’s, however his top choice is Harvard University.
“I want to major in political science, minor in international relations and I am in between two additional minors which are African American studies and Middle Eastern studies,” he said.
Ultimately his long term goal is to run for some type of office.
“If you ask anyone who knows me, they would say it would be to run for president in 2048. But I am definitely considering diverse goals and a lot of them do involve being in the federal government in some capacity,” said Okeke.
In June 2019, Okeke will have completed his term as an LAUSD student board member and the seat will be up for election. Do you have what it takes to become the next LAUSD student board member? Interested students can apply in March 2019 by visiting www.lausd.net or email Dr. Brenda Manuel at [email protected] .
ADVERTISEMENT
ADVERTISEMENT
Categories: Crenshaw & Around | Education | Local | News
Tags: assemblyman Mike Gipson | California YMCA’s Youth and Government Program | Harbor Teacher Preparation Academy | Kimberlee Buck | LAUSD Board of Education | Los Angeles Unified School District | Tyler Okeke | YMCA