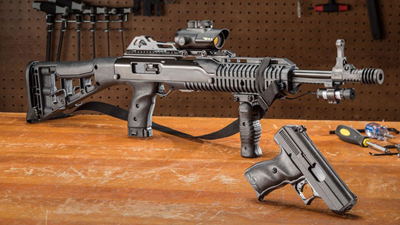 Edmon Adonis Washington (dob 10/9/80) of Panorama City and Brook Thomas Lindsey (dob 11/1/85) of Encino each face one felony count of possession of an assault weapon, a Hi-Point semi-automatic assault rifle.

Lindsey pleaded not guilty to the charges and is scheduled to return for a preliminary hearing on Aug. 31 in Department 120 of the Los Angeles County Superior Court, Van Nuys Branch. Arraignment for Washington was continued to tomorrow in Department 100.

On Aug. 16, Washington and Lindsey were reportedly armed with semi-automatic assault rifles while they walked around the area near 104th Street and Crenshaw Boulevard. Both defendants were later arrested in the San Fernando Valley.

If convicted as charged, Washington faces a possible maximum sentence of three years in county jail and Lindsey faces more than eight years in jail.