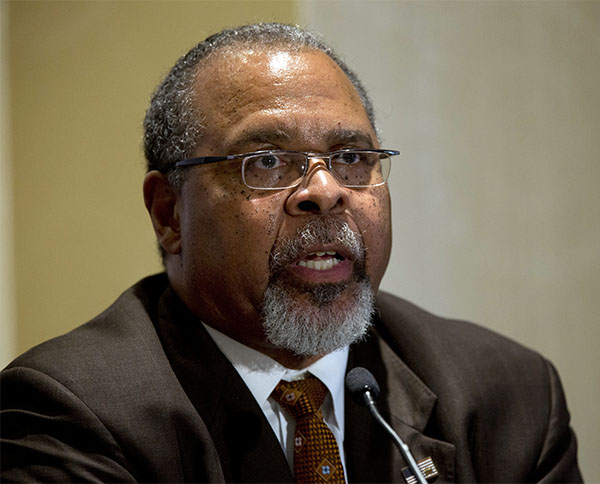 The Ohio Republican selected by President-elect Donald Trump to lead his domestic-issues transition is an outspoken conservative with a history as a party maverick.

Ken Blackwell prevailed in an intraparty feud in 2006 to become Ohio’s first black nominee for governor. He also took on fellow Republicans in the state Legislature while serving in statewide office as state treasurer and secretary of state.

Blackwell’s role on the transition team appeared on an organizational chart obtained by The Associated Press.

A Republican with knowledge of the process told The Associated Press that Blackwell has been at work for Trump since the summer, vetting potential appointees for U.S. domestic agencies. The person wasn’t authorized to disclose the details publicly and spoke on condition of anonymity. The Republican said it was unclear whether Blackwell would be considered for, or willing to accept, an administration position.

He currently lives in Cincinnati, where he is a former mayor, with his wife, Rosa, a retired schools superintendent.

Since his days mixing it up inside the home-state GOP, Blackwell has taken on an increasingly visible national role. He serves on the boards of the National Rifle Association and conservative Club for Growth. He’s also a senior fellow at the Family Research Council, whose evangelical president Tony Perkins advocated for Trump’s election.

Blackwell ran unsuccessfully for chairman of the Republican National Committee in 2009.

As Ohio’s state elections chief, Blackwell played a pivotal role in administering the 2004 presidential election even as he served as Republican George W. Bush’s honorary campaign co-chairman. Democrats alleged in political attacks and lawsuits that Blackwell supported vote-suppressing policies favoring Bush, who won the state and the election. Blackwell ultimately prevailed in court.

His relationship with the Bush family goes back years. Blackwell served as undersecretary in the Department of Housing and Urban Development under President George H.W. Bush from 1989 to 1990. Bush appointed him ambassador to the United Nations Commission on Human Rights, a position he held from 1992 to 1993.

HUD is one of nine agencies for which Blackwell is managing Trump’s transition. The others are the departments of Energy, Labor, Health and Human Services, Transportation, Education, Interior and Agriculture and the Environmental Protection Agency.

Even as he was being battered from the left, Blackwell’s fellow Republicans at the Ohio Statehouse were plotting his political demise.

A secret memo leaked in 2004 laid out a plan by aides to then-GOP Ohio House Speaker Larry Householder for boosting the boss’s career while destroying Blackwell’s. The document emerged shortly after Blackwell had turned over to the Justice Department another leaked document, which alleged a campaign money-laundering scheme inside Householder’s caucus committee. The department declined to prosecute after a two-year investigation.

After the dust-up and facing term limits as secretary of state, Blackwell defied the wishes of the state GOP chairman and announced a run for governor, setting up a faceoff with two other party veterans. He prevailed in the primary, then lost badly in the general election.