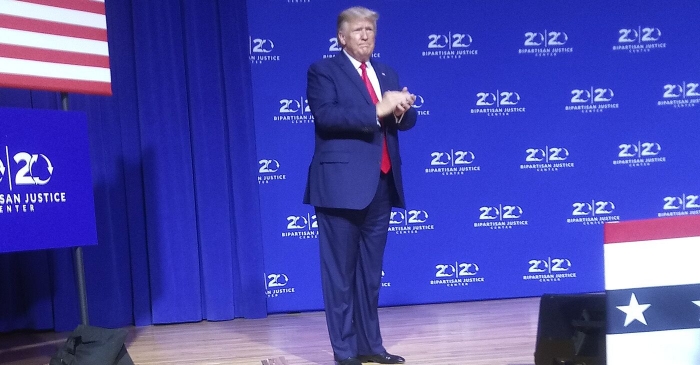 Trump said he would continue to work to ensure that Americans have opportunities to get training while they are incarcerated and to succeed when they leave prison. (Photo: Stacy Brown / NNPA)

Hosted by the 20/20 Bipartisan Justice Center, a nonprofit founded by a bipartisan group of African American leaders from across the country who advocate for criminal justice reform, the event includes a host of Democratic presidential hopefuls, local officials, and other stakeholders.

Many are scheduled to speak over the weekend while Trump kicked off the three-day forum by receiving the 2019 Bipartisan Justice Award.

The award is given annually to a public servant who has demonstrated the ability to work across the aisle to achieve meaningful progress in reforming the criminal justice system.

“What the hell do you have to lose?” he stated to a mostly partisan crowd at the college.

Under his watch, the First Step Act was passed, and much has improved, Trump stated.

“There’s still work to do but what I can say, on this day, a change has been made and we are looking forward to things to come,” he said.

“As a result of our tax cuts, our regulatory cuts… the energy reforms, our economy is booming,” Trump said. “Nothing better for former prisoners that are coming home, when there’s very low unemployment.

“Maybe our economy is the best criminal justice reform of all. Jobs are helping keep offenders from reoffending.”

The president also invited several individuals whose long prison sentences were commuted by him, including Alice Johnson who was released after serving 22 years of a 50-year sentence that followed a first-time drug offense.

“Our support has been unprecedented,” Trump stated.

The president’s remarks took place in front of a capacity crowd of about 300 people. Pool reporters noted that only nine Benedict students attended while many protested Trump’s appearance outside.

Inside, supporters chanted “Four more years!” as Trump praised his administration for the First Step Act.

“The positive effects of this revolutionary legislation will be long-lasting.”

The historic First Step Act is providing prisoners with a second chance through rehabilitative programs, fair sentencing, and smart confinement.

Trump said he would continue to work to ensure that Americans have opportunities to get training while they are incarcerated and to succeed when they leave prison.

“We’ve done so much more than anyone else,” Trump stated.