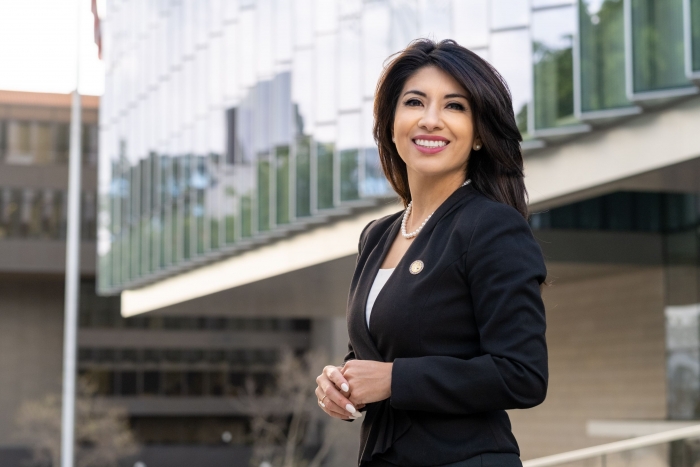 The Sentinel was one of the stops on Torres’ campaign trail last week where she emphasized to June 7 voters that she has their best interest in mind.

“I’ve heard things like abolish or defund the police,” she said.

“[But] when we sacrifice public safety it disproportionately affects Black and Latino communities… I lived [for example] in the 90s in gang territory. I’ve seen what happens when police don’t go into [certain neighborhoods]. It’s bad.”

Torres has also seen what happens when the city goes from one extreme to the other, sweeping lock-ups and crackdowns to diminished police presence and apathy in different communities throughout the city. Instead, Torres explained, she will focus on the quality of policing in Los Angeles by putting more resources into better training and developing relationships between law enforcement and L.A. residents. She has confidence in her abilities, she said, citing her experience as a litigator and federal prosecutor “with over 30-plus trials in federal and state courts,” her resume reads.

Torres’ beginnings were indeed humble, both her parents undocumented, her mother becoming a widow when she was still a toddler. With a working mom, Torres, the oldest, had to look after her younger siblings. She learned then the importance of hard work and education as powerful antidotes to poverty.

Torres was a political appointee with the Department of Homeland Security under President Barack Obama where she was part of the policy team leading the design and implementation of the President’s executive actions on immigration.

“I was inspired by him,” she said. “He prioritized the people. I intend to do the same.”

Currently, Torres works as a prosecutor. According to her bio, “her practice focuses on trial work of all types, complex litigation, criminal investigations and enforcement.

“Throughout her legal career, she has made her community safer, sought alternatives to incarceration where appropriate, and fought for the most vulnerable people in society.  As a federal prosecutor, Marina has spent years on the front lines for public safety – fighting corruption, tackling money launderers and taking down international drug cartel operations.  She has advocated for victims of domestic violence and sex crimes, targeted illegal firearm trafficking rings, and taken down a white nationalist fraudster preying on hundreds of distressed elderly and immigrant homeowners…”

“I could tell you some stories,” she told the Sentinel.

“Domestic violence and child abuse cases [for instance], there were so many Black women who were moms of victims or were victims themselves or moms of defendants.

“We are right now at a time when crime is going up, crimes against people, crimes against properties. The city’s residents feel that their elected officials are not responding to their reasonable request for safety.”

“I truly believe that we can [rebuild] public safety in Los Angeles without going to either extreme,” Torres said.