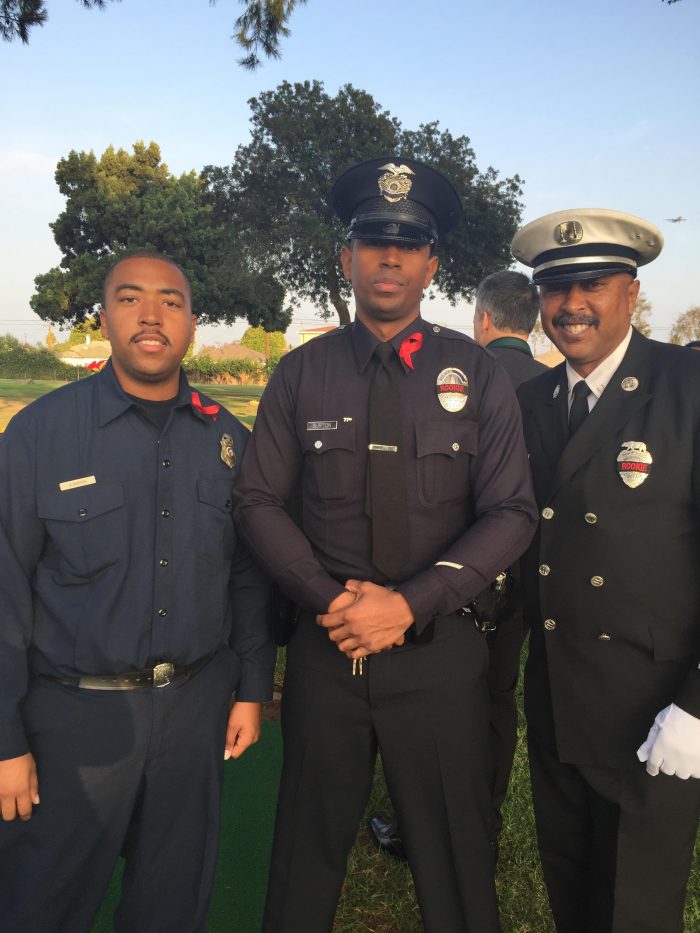 The Burton family has been in the business of public service to the greater Los Angeles community for over 50 years. L.A. County fire captain Brent Burton and his sons, LAPD officer Andre Burton and L.A. city firefighter Adam Burton III, have made it their mission to show young men and women of color that public service is a viable option to leading productive lives.

“The Burton name means service,” remarked Captain Burton proudly. “We believe in giving back to our community and it is not self-serving.”

Captain Burton, at age 13, joined the LAPD Explorer program at the Southwest Division. He then became an explorer scout with the L.A. City Fire Department. He recalls the very moment he decided that he would pursue a career as a firefighter.

“I was there when they got a call to go to a fire and I was really impressed,” said Captain Burton. “I saw more action and excitement there and I wanted to be a part of it.”

When his youngest son, 23-year-old Adam Burton III, was still working as an ambulance driver, both he and Captain Burton were summoned to respond to the same call on the border lines separating L.A. County from L.A. City. Shortly after arriving on the scene, his eldest son Andre Burton showed up. It was the first time that Captain Burton ran into both of his sons on the job. 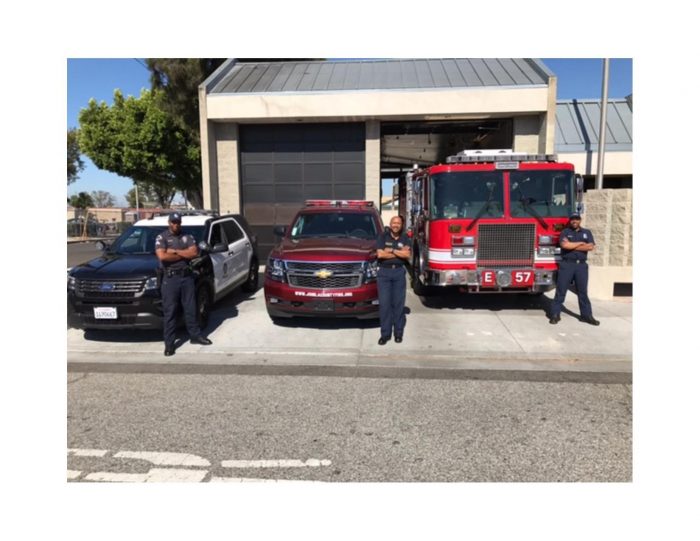 “It’s a proud moment because they are good at what they do,” said Captain Burton.

“You can tell he’s a police officer,” said his younger brother, Burton III. “You can walk into a room and point him out because he is strong and silent.”

Andre, 29, says of growing up with his father working as a firefighter, “It’s all I know. A lot of my relatives are firemen and his close friends, we pretty much grew up in the fire station.”

While his dad never pushed him to become a firefighter, Andre decided if he was not a firefighter by 21 that he would become a police officer. Eight years later, he says the process was simple for him to transition to a policeman as he had been working for LAPD as a civilian employee. 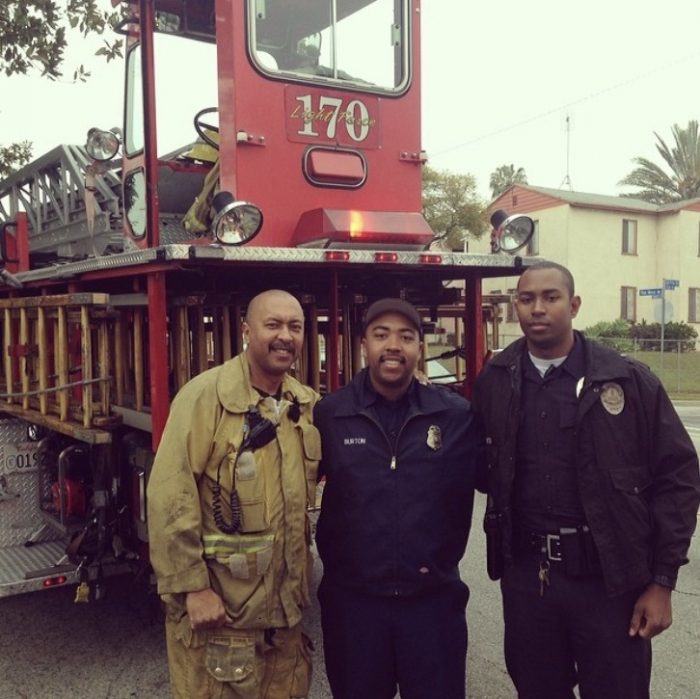 His younger brother, Adam Burton III, who is six years his junior, knew from the time he was five-years-old that he wanted nothing more than to follow in his father’s footsteps. Burton III emphasized how much of an impact it was to visit his dad at the fire station.

“One time I went to the fire station with my mom and sister; I was probably 11,” recalls Burton III. “We were there for only a couple minutes when they got a fire call and I saw my dad run and suit up among the other firemen, I cried because just seeing him inspired me.”

In April 2016, Burton III graduated from the fire academy and has spent a little over a year with the L.A. City Fire department as a firefighter.

“Everyone who is in the fire department knows my dad, so they expect a lot of me and that just makes me want to do better,” said Burton III. 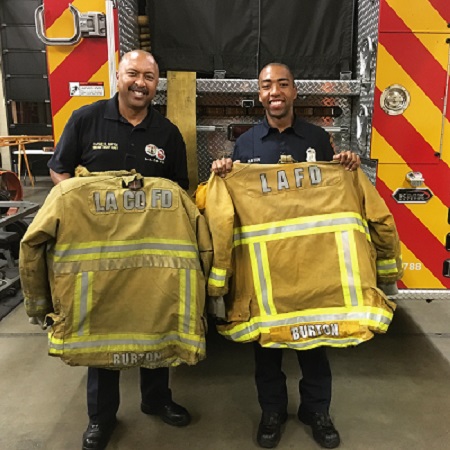 The Burton tradition of service did not start with Captain Burton, however. In fact, he is the son of Adam Burton II, his youngest son’s namesake, who served as the former senior deputy to L.A. County supervisor Kenneth Hahn from 1964-69.

“My father was a presence in my life,” said Captain Burton. “I learned a lot of things from him. He was a very prominent man back in the day.”

Burton II was placed at the helm of the County of Los Angeles’ Model Cities program. Incepted after the Watts Riots under President Johnson, the program was designed to improve environments of underserved neighborhoods and the lives of its residents. His work spanned beyond serving the community as he tried his hand at politics, running for both city council and state senate.

“He would always tell me, keep your nose clean,” said Andre. “Meaning stay out of trouble.”

It was advice that stuck with Andre who was extremely close to his grandfather. Andre described him as “pretty straightforward, most called him militant, but he was always in a position of power where he would make things happen.”

“We lost our patriarch, but we gained the twins, is the way we look at it,” said Andre.

Captain Burton is the father to three children Andre Burton (29), Shani Burton (26) and Adam Burton III (23). He is also now a grandfather to Kyle and Corey Burton.

While the Burtons have not signed the fourth generation of Burton men up for the Explorers program just yet, it perhaps is already written in stone that the legacy is set forth by the three generations that have preceded them, public service.

Thank you for your service.