It has not gone unnoticed by many, “What’s happening to our country?”

Statements made by people in the public arena bears heavily on outcomes experienced. I have not attempted to approach some of the many concerns in my own mind. Sometimes they may be too controversial. I like to sort my thoughts. Example: President Trump says, “Make America great again.” Different interpretations based on the listener. What does he mean? Some would hear, “Aaw, you just want to take people backwards and decrease access to the nation’s goods.” Others may hear, “The United States has been giving away too much to other countries and too many of our own citizens are impoverished. Foreign countries haven’t been paying their fair share and tariffs may be set.” There’s trade imbalance; the U.S. gives out much help; the U.S. wants other countries to like us. (things I have heard). Perception is the measure of what people believe, regardless of whether it’s fact or fiction. The rich and the not so rich: (way below): poverty defined: the lack of the usual or socially acceptable amount of money or material possessions. The “poverty threshold” set by the U.S. government measure recognizes poverty as a lack of those goods and services commonly taken for granted by members of mainstream society. Despite improvements, official poverty rate remains high with statistics, 14.3% of Californians lacked enough resources—about $24,000 per year for a family of four—to meet basic needs in 2016. Latest I could find: family of four $25,750 for the U.S. except Hawaii $29,620; Alaska $32,190. The wide difference in the cost of living between states is ignored. Also, a big difference between urban areas and rural areas. On the other hand, if poverty levels were adjusted for these variations, even more people would flock to urban areas to take advantage of the higher benefits. Food shortage: what about that? The reality is there hasn’t been any real substantial progress on food insecurity in the United States for many years. “Some households” actually 15 million American households in 2017. That’s roughly 12% of the population where “access to adequate food is limited by a lack of money and other resources.” Sept. 7, 2018. Infant nutrition. ” It’s within our reach to eliminate malnutrition,” Bill Gates told the London summit, and many companies and rich nations are backing an African government-led plan to tackle it. Big improvements have already been made.

The solution lies in education on good feeding techniques and getting the right nutrients to the mother and child from the beginning of pregnancy. Overall, malnutrition is responsible for an 11% decline in GDP in affected countries. Alex Renton (The Guardian): [to be cont’d] Think tanks might help to come up with solutions. 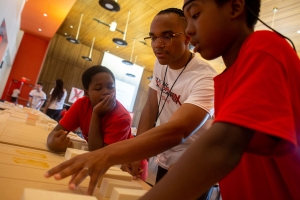