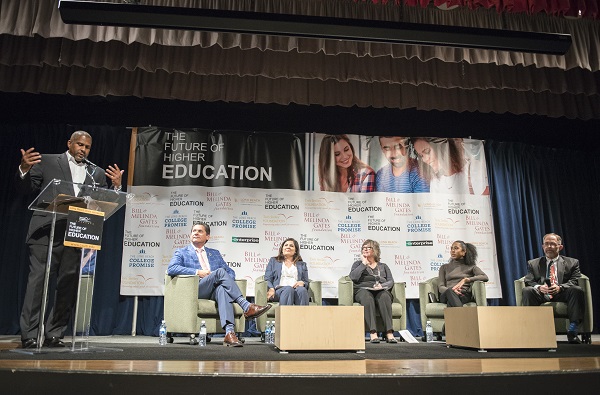 Tavis Smiley has recently been traveling the country with the support of the Bill and Melinda Gates Foundation talking about the future of higher education. He recently hosted one of those talks at California State University, Long Beach (CSULB), Beach Auditorium. Sponsors included the Bill and Melinda Gates Foundation and Enterprise. The event was presented by the Tavis Smiley Foundation.

The discussion entitled, “The Future of Higher Education”, aimed to inspire communities to help reshape the college experience; so, it prepares every student for success in college, career, and life. It’s an open call to rethink and design American colleges to work at their best.

While the topic for the need for more diversity in Cal State and UC institutions, Campaign for College Opportunity President Michele Siqueiros challenged the panel and audience by saying “we keep defending diversity; maybe it’s time to start speaking of the lack of diversity.”

It was also noted that institutions have seen a rise in counseling, discipline issues, safety and hate crimes with the current Trump administration.

Before the town hall started, we caught up with Smiley to discuss the “State of Black America” with three names we wanted his thoughts on:

Tavis Smiley: An embarrassment. An embarrassment to the country. He’s destroying our democracy. At some point, he has to be stopped. I’m not sure impeachment is the strategy to stop him. That takes time but there is no way we can continue to endure this nightmare.

Smiley: The jury’s still out on his legacy. I certainly voted for him twice like every other Black person I know. I still celebrate the fact that he was the first African American president. What I’m having difficulty with is the data with the legacy. The data indicates that in every leading economic category, Black people lost ground with this presidency. So, I’m having difficulty [justifying] the symbolism with the substance. This is what I was talking about eight years ago. I never hated Barack Obama, I just love Black people, and because I love Black people, I knew if we didn’t hold him accountable, if we just sat back and rejoiced and be happy because we had a Black president, but didn’t make any demands, it wouldn’t lead to anything.

Smiley: I love Tom. I just heard he announced his retirement. So, I wish him all the best on that. Tom Joyner has been good for America. Tom Joyner has been good certainly for African American people. Before Steve Harvey, before Rickey Smiley, before Russ Parr, Tom Joyner was the first African American to be syndicated in radio across the country. That town hall meeting that Tom allowed us to have every morning, that entertained us but also empowered us was beautiful. I think his legacy … it’s going to be great, it’s going to be grand and years from now, they’ll appreciate what Tom did for as long as he did. 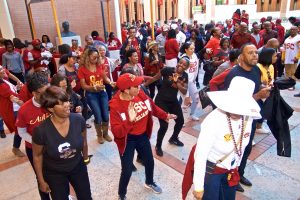