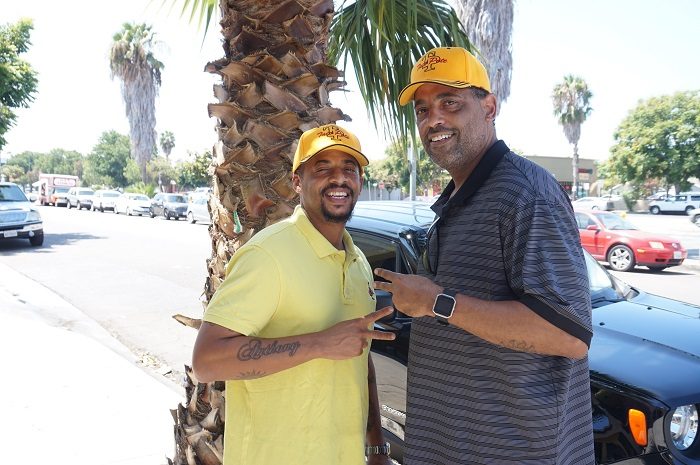 Taste of Soul (TOS) brings out some of the best food vendors from all around—especially local mainstays. Taco Pete will be featuring their famous tacos, which have been around for decades in the South Los Angeles area. Family-owned, Taco Pete plans on coming to Taste of Soul and proving why they’re better than all the rest.

Charles and Aaron Jones, brothers who operate Taco Pete, are looking forward to attending TOS for the first time. Established in early 60s to mid-70’s, Taco Pete has a rich history in South L.A. The Jones family took over Taco Pete in 1989 and brought their own flavor to the fast food joint.

“The recipe came from our aunties,” said Aaron. “The original recipe.”

Pete, of Taco Pete, sold off some of his multiple locations giving the Jones’ their choice of location, namely, the establishment on 120th St and Central Ave. The first the Jones’ bought was on Slauson and 7th Ave. Together, the Jones’ aunts taught Charles everything he needed to know about running the eatery.

“He got them blunt-force-trauma,” Aaron said laughingly about his aunts teaching Charles the ropes. “In the kitchen, taught him everything he needed to know.” Their aunts taught Charles about the importance of serving the community and caring about their customers.

Their aunts retired from running Taco Pete in the early 90s and soon after, one of them passed away. Charles took over Taco Pete in the mid-90s, with his father and eventually, his brother, Aaron, came on board in the late 90’s. Today, there is only one location, the 120th and Central Ave. location, where they still serve those famous tacos.

“It’s almost like we’re reinventing ourselves,” said Charles, “getting back in touch with the community.”

The Jones brothers have been busy doing catering and other events to let the community know Taco Pete is still around. Their tacos have stood the test of time and they consider their family recipe the best around.

“The recipe is authentic, it’s very distinguished, the ground beef is to die for,” said Charles.

Taco Pete also features their signature chicken taco, “Juicy Chicken” and a signature ground turkey taco. All the recipes are in-house and the brothers do everything themselves. They’re known for their ground beef, but according to the Jones bothers, the ground turkey is a favorite.

When asked they had anything else to say about Taco Pete coming to Taste of Soul, they said, “# 1 Taco in all of Los Angeles, come get it, don’t cheat yourself,” said Aaron.

“Treat yourself!” said the Jones brothers.

“What you know about them tacos,” said Charles.

Taco Pete will be selling their famous tacos at Taste of Soul on October 21. For more information about Taste of Soul, please visit www.tasteofsoul.org.