As Malians went to the polls on Sunday, over 700 polling stations were shuttered amid threats of violence and attacks including election officials beaten up, ballot boxes burned and election supervisors stopped by armed groups from entering polling stations. ... read more »
Riot Police Break Up ‘Transparency Rally’ in Mali 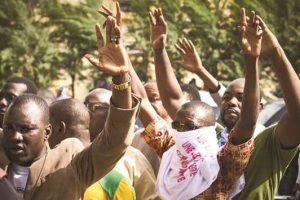 Several hundred people attended the rally, outside the headquarters of the Democratic Alliance for Peace – the party of the current President Ibrahim Boubacar Keita. Some 30 people were hospitalized, according to the protestors, including prominent opposition figure Etienne Fabaka Sissoko who was reportedly in a coma after security forces fired live ammunition at protesters on Saturday. ... read more »
ADVERTISEMENT
ADVERTISEMENT
Videos
‘Two Distant Strangers’ Wins an Oscar- Watch the Trailer