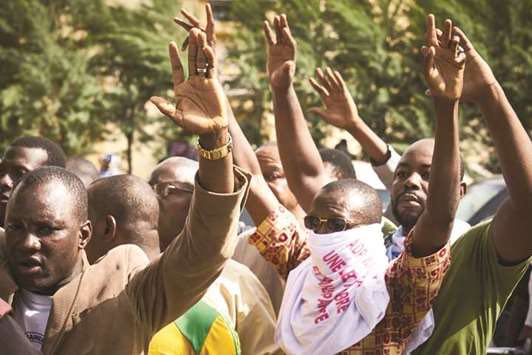 The UN is calling for calm in Mali after dozens of protestors were attacked by soldiers in the capital city Bamako, two months ahead of a presidential election.

Several hundred people attended the rally, outside the headquarters of the Democratic Alliance for Peace – the party of the current President Ibrahim Boubacar Keita. Some 30 people were hospitalized, according to the protestors, including prominent opposition figure Etienne Fabaka Sissoko who was reportedly in a coma after security forces fired live ammunition at protesters on Saturday.

Police also fired tear gas and beat demonstrators with batons, according to an AFP reporter at the scene. Clashes also took place in other locations.

The crackdown on protestors took place just as U.N. Secretary-General Antonio Guterres was scheduled to meet with donors in Bamako, the Malian capital. The donors provide operating funds to the G5 Sahel, a partnership of five countries hard hit by al-Qaeda and Islamic State terror attacks.

Mali has been the center of a multi-national force fighting jihadists for over a decade.

Last February, a conference of about 50 countries including the United States, Japan and Norway pledged 414 million euros ($509 million) for the G5 Sahel force, made up of troops from Mali, Niger, Chad, Burkina Faso and Mauritania.

But the force, planned for years, has only got off the ground in the past few months as little of the pledge donations appear to have reached the force to keep it afloat.

“The international community must understand the need to provide the G5 Sahel countries with predictable support,” Guterres said, after meeting Prime Minister Soumeylou Boubeye Maiga and leaving flowers to commemorate the roughly 170 U.N. peacekeepers killed in Mali since 2013 – the most endangered U.N. mission anywhere in the world.

“We (the United Nations) are working to ensure effective international solidarity by the strength of G5 Sahel,” he added. “The Malian government must ensure the protection of fundamental human rights and freedom of expression to peaceful demonstrations, including in the context of the ongoing state of emergency,” a UN statement said.

In the polls that take place in July, President Keita will face around a dozen challengers, including Modibo Kone, a rural development expert at the West African Development Bank, and Hamadoun Toure, who runs the “Smart Africa” initiative to drive development on the continent via technology.

Meanwhile, Human Rights Watch is urging the government of Mali to investigate abuses against suspects detained during a major military operation against armed Islamist groups.