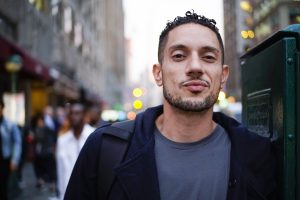 Omar Offendum is a Syrian-American rapper and poet living in Los Angeles. Known for blending hip-hop and Arabic poetry, he has lectured at a number of museums, educational and cultural institutions including The John F. Kennedy Center for the Performing Arts, LACMA, Arab American National Museum, Poets House, Qatar Foundation International and the Nobel Peace Prize Forum.  A graduate of the University of Virginia’s School of Architecture, he has helped raise millions of dollars for various humanitarian relief groups and has been able to carve a distinct path for himself as a thoughtful entertainer and activist able to speak to a multitude of relevant issues over the course of his decade-long career. ... read more »
ADVERTISEMENT
ADVERTISEMENT
Videos
WATCH: Black Money Matters Ep. 4 – Securing The Bag: Connecting Black Business to Major Contracts