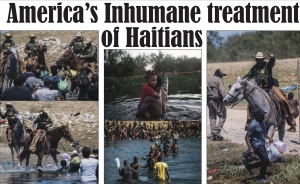 Haitian Migrants were “expelled” from American soil over the weekend; the forced movement is bleeding into the current week.  A lot of footwork took place on Monday, according to U.S. officials, as over 6,000 people of the Haitian community were removed from Texas. ... read more »
Trump’s Latest Executive Orders Seen as Attempts to Sabotage a Biden Administration and Eliminate Diversity and Inclusion Programs