Nana King, in defining his first practice of service, phrases it as “trying to love somebody,” which is a linking of two of the central pillars in his self-understanding and self-assertion in the world.   ... read more »
Ida B. Wells and Kawaida Womanism: Considering the Mission and Meaning of Woman – Part 1

This offering is in rightful homage and deep appreciation, not only for Nana Ida B. Wells-Barnett, but also for the awesome and audacious women of Us, the Malaika and Matamba, the Simba and Senut who created and put forth in thought, dialog, discourse and practice what we now call Kawaida womanism. ... read more »
Paul Robeson’s Moral Imperatives: Striving to be African and Free

If there is one hard and costly lesson learned from history and the current and continuous police killing of our people and the depraved disregard for our lives and our right to life, freedom and security that this represents, it is that there is a fatal penalty to pay for our daring to be our Black selves and free our Black selves in America. But we rightfully continue to resist our brutal erasure and savage oppression. For there is no moral or meaningful alternative to this position and the righteous and relentless struggle we wage to achieve these twin and intertwined goals. ... read more »
ADVERTISEMENT
“Pursuing the Seven-Fold Path of Blackness: Practicing Principles of Life and Struggle”

As we continue to mark, celebrate and commemorate the 55th Anniversary of the founding of our organization Us, 6205 | September 7 | 1965, I want to continue to draw from some of our early ideas and practices and discuss and demonstrate their current and enduring relevance. ... read more »
Bringing Forth the Fire Within Us: Weathering the Worst of Winters

Reflecting on the challenge before us, I am drawn to the word for “challenge” in Swahili, changamoto. The word is a combination of two words—moto (fire) and changa which has several meanings, but is here interpreted as both to collect and to contribute. Thus, it literally means both to collect and contribute fire, a gathering and giving of fire, interpreting fire here as vital and transformative energy and focused and determined agency. ... read more »
Tambiko For Min. Malcolm: His Jihad, Awesome Sacrifice and Continuing Powerful Presence

This is tambiko for Min. Malcolm X, an offering of words and water in reverent remembrance of his legacy-rich life, his jihad of righteous self-raising and liberational struggle, his awesome sacrifice and his continuing powerful presence in the interest and advancement of African and human good in the world. ... read more »
Remembering the Watts Revolt: A Shared Condition, Consciousness and Commitment

The Anniversary of the 1965 Watts Revolt occurs in the context of a larger history of Black struggle, sacrifices and achievements: the assassination, sacrifice and martyrdom of Min. Malcolm X; the Selma March; the Voting Rights Act; the founding of our organization Us and the African American Cultural Center; and the introduction of the Black value system, the Nguzo Saba, which became the core values of the pan-African holiday Kwanzaa and of Kawaida, a major Movement philosophy of life and struggle. ... read more »
Black Women’s History: Celebrating Miracles, Wonders and Struggle

This is the month for celebrating the miracles and wonders we call Black women, that other half of our community which makes us, as a people, whole, these equal and most worthy partners in life, love and struggle to bring good in the world. ... read more »
ADVERTISEMENT
Remembering and Raising Dr. Julia Hare: Her Honored Life and Unforgettable Love

As an African people, a caring and committed people, we can never get used to the passing of those we love, respect and honor. We imagine them always with us, laughing and lifting us up, bringing the dawn and opening the way for us to see and assert ourselves in dignity-affirming, life-enhancing and flourishing-directed ways and we are duly disoriented if not undone when they leave us. ... read more »
Righteous and Relentless Struggle:  Reflections on the Principle and Practice

Even without understanding it in the depth that would come later, we were in, 1965, a new generation building on centuries of sacrifice and struggles of all those who preceded us, those who cleared firm and sacred ground on which we stood and still stand and who opened essential and upward ways on which we would continue the unfinished struggle for liberation and ever higher levels of human life. In speaking of this history, Mary McLeod Bethune told us we are heirs and custodians of a great legacy," but we were not always able to recognize and rightfully respect the historical and cultural ties of life and struggle that bound us with each preceding generation. ... read more »
Message From Watts: Liberation is Coming From A Black Thing

The year 1965 began on an ominous and unsettling note—the assassination and martyrdom of Malcolm X, the Fire Prophet. Even in the white and winter cold of February, it was a sign of the coming fire. Indeed, it pointed toward the fiery fulfillment of prophecy which Malcolm, himself, had predicted. It was there, too, in the title of James Baldwin’s classic, The Fire Next Time. And it was the topic of countless conversations around the country. Baldwin had taken his title from a line in a Black gospel song which says: “God gave Noah the rainbow sign, no more water, the fire next time.” And this, for us, was the fundamental time of turning when the fire would be this time. ... read more »
Defining African Liberation Day: Celebrating Through Struggle and Living Practice 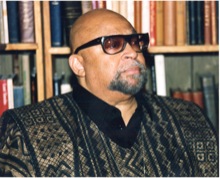