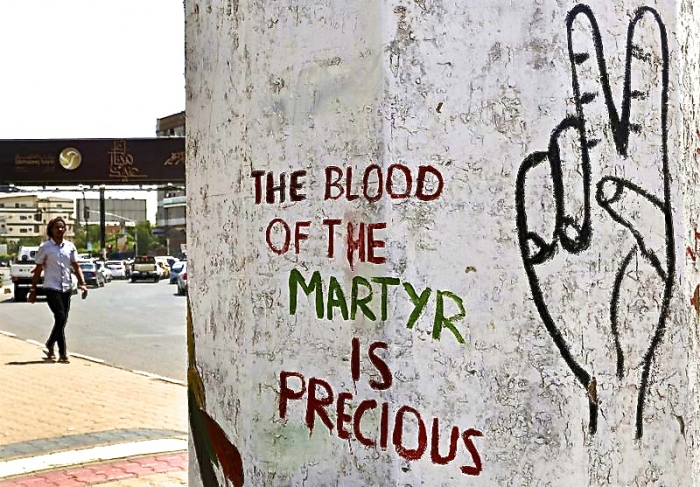 A quote from the Sudanese opposition is seen on a wall Sunday, June 16, 2019, about the protesters who were killed by security forces on June 3, 2019, where demonstrators had been holding a sit-in, in Khartoum, Sudan. Sudanese officials say al-Bashir is being taken to the prosecutor’s office for corruption probe. (AP Photo/Hussein Malla)

Sudan’s protest leaders on Monday called for nighttime demonstrations and marches in the capital, Khartoum, and elsewhere in the country, amid a tense standoff with the ruling military over who should lead the transition after the ouster of the autocrat Omar al-Bashir.

The protest leaders said they’ve begun a “revolutionary escalation” to pressure the country’s generals to hand over power to civilians and to condemn the military’s violent dispersal of their sit-in camp in Khartoum earlier this month.

At least 128 people have died since the security force’s crackdown on June 3, according to the protest organizers. The military-backed authorities, however, say 61 people died, including three members of the security forces.

The group representing the protesters — known as the Forces for the Declaration of Freedom and Change — said the night rallies will begin on Tuesday and marches on Thursday.

The calls came a day after the deputy head of Sudan’s ruling military council, Gen. Mohammed Hamdan Dagalo, pushed back against demands from protest leaders concerning the composition of a transitional legislative body, seen by protest leaders as their “most important victory” in talks with the military.

Dura Gambo, an activist with the Sudanese Professionals Association which has spearheaded the protest movement since December, said the protest leaders chose to return to the streets after they realized that the military “started to pull out of the previous deals.”

“There is a total impasse. The negotiations have been suspended, internet services remain blocked, and the Ethiopian mediations apparently did not make progress,” she said.

Negotiations between the military and protesters were called off after the deadly sit-in dispersal on June 3. The FDFC announced a package of conditions to be met before resuming talks, which included the formation of an international commission to investigate the killings of protesters, restoring internet services, and adherence to any deals struck before the breakdown in talks.

The military council rejected the idea of an international investigation, but the Ethiopian Foreign Ministry had said the council had agreed to adhere to the previous deals.

Both Ethiopia and the U.S., which has sent a special envoy to Sudan, have made efforts to revive the talks and find a peaceful solution.

In a sign of continued international pressure, the European Union on Monday called for military and protest leaders to refrain from unilateral moves, and resume negotiations “immediately,” based on agreements reached so far.

The statement, issued by an EU council representing its member states, urged the military to take confidence-building measures, including lifting restrictions on freedom of assembly, freedom of the media, civic space and access to the internet, and for the FDFC to respond accordingly. 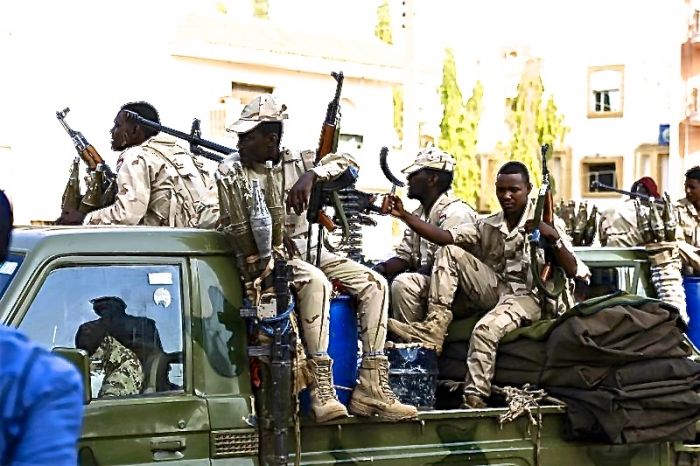 Military forces secure the area outside while Sudan’s ousted president Omar al-Bashir is questioned at the prosecutor’s office over charges of corruption and illegal possession of foreign currency, in Khartoum the capital of Sudan Sunday June 16, 2019. The deposed strongman has been held under arrest in the capital since the military removed him from power in April amid mass public protests against his 30-year rule. (AP Photo/Mahmoud Hjaj)

Gambo warned that the protesters were still facing deadly repression as long as the feared paramilitary Rapid Support Forces and other security units were left on the streets in Khartoum and other cities.

“Street demonstrations are risky. It means more crackdown and deaths,” she said.

In a press conference in Khartoum on Monday, prominent activist Mohammed Naji al-Asam reiterated the demand for an internationally-backed investigation into the protesters’ deaths, before resuming talks with the military.

“We are ready for any scenario. It seems that the military council intends to cling to power to rule Sudan alone,” he said.

“This will not happen,” he added.

He says 12 alleged rape cases were documented in the crackdown. He did not elaborate.

Last week, Pramila Patten, a U.N. special representative on sexual violence in conflict zones, expressed “grave concern” over reports of the rapes of protesters and female medical personnel by security forces and militias in Sudan.

Over the weekend, the hashtag #blueforSudan began to trend locally and internationally on social media, as a sign of solidarity with Sudan’s embattled protest movement.

Gambo, the activist, said the hashtag was created in memory of a protester, Mohammed Hashim Matter, a young engineer who was killed in the sit-in dispersal earlier this month.

“Mohammed had written on his social media: ’I have painted the sky blue,” she said, referring to hopes for change in Sudan aroused by the protesters. “After his death, his friends launched a social media campaign and changed their profile pictures to blue, Mohammed’s favorite.” 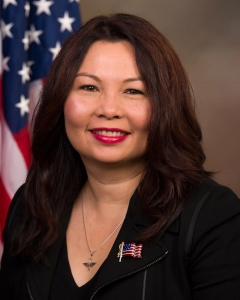