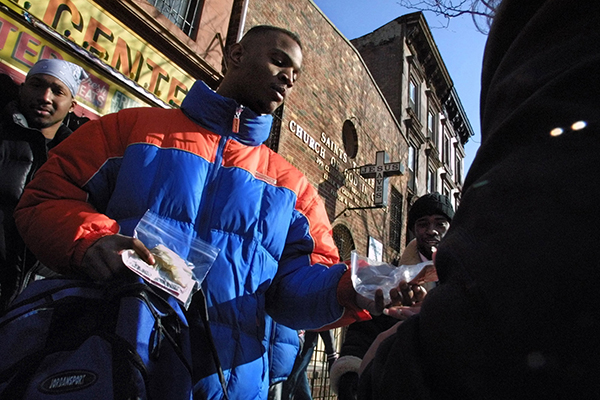 Gerald Lykes, who has been HIV positive for 12 years, hands out safer sex kits in the Bedford Stuyvesant neighborhood of Brooklyn, N.Y., Wednesday, Feb. 7, 2001. Lykes works for a neighborhood AIDS outreach and education program funded by a grant from the Centers for Disease Control. A recent study shows that 30 percent of young gay black men in large U.S. cities are infected with the virus that causes AIDS. (AP Photo/Robert Mecea)

Findings from a recent UCLA-led research study suggest that Black men who have sex with men can benefit from social network support when it comes to HIV prevention. Researchers said the findings will be helpful in understanding how to use the networks to better encourage testing and the use of pre exposure prophylaxis (PrEP). They could also give a clue on how to address social barriers that contribute to health disparities in the Black community when it comes to the disease.

“We started this study in 2011,” explained one of the project’s lead researchers Steven Shoptaw.

“Up until that time there had been no studies aimed directly at African American men who have sex with men. But at the time, the disproportionate infection rates were there for this group.”

Not only were the numbers there, he said, but no one knew why.

“There was no behavioral difference in behaviors among this group compared with any other [MSM] ethnicities,” said Shoptaw.

So, researchers set out to find non behavioral but measurable factors that would contribute to the disparity.

“We followed subjects for a year (about 1500) who were all [HIV] negative,” Shoptaw explained.

“Twenty eight men from the sample became positive. We started to look at who they were associating with, not who they were having sex with but people in their lives [family/ friends]. The difference we found in the men who became infected and the men who didn’t was the level of emotional and social support.”

These supportive networks could save lives, he said

Things like having someone who could take you to the doctor for instance or having someone just checking in on your personal safety can make all the difference.

The researchers said they analyzed data from the BROTHERS study (2009–2011), which examined a multicomponent intervention for Black men who have sex with men (MSM) in six U.S. cities. They analyzed the associations between measures of network support such as personal/emotional, financial, medical, and social participation, and time to HIV sero conversion, which is when antibodies to the virus develop and it becomes detectable in the blood.

A total of 1000 Black men tested negative for HIV infection at the beginning of the study. Of these, 28 eventually tested positive during the study period. Participants who remained free from HIV were more likely to receive personal/emotional, medical or social support via social networks, they said.

UCLA–Robert Wood Johnson Clinical Scholars Program and the National Institutes of Health funded the research. Organizers said findings from the study will be published in the Journal of Acquired Immune Deficiency Syndrome (JAIDS).