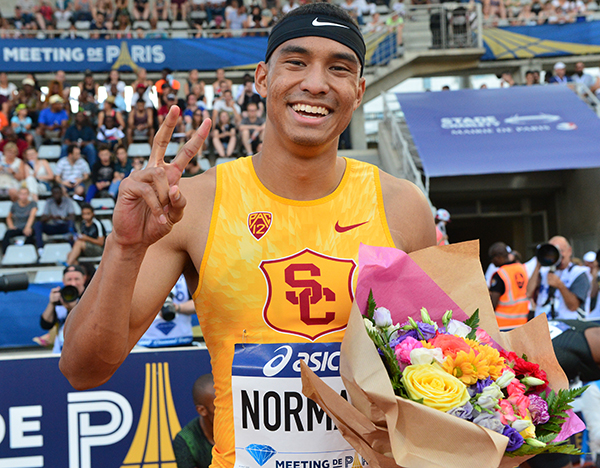 Michael Norman of Southern California (USA) poses after winning the 200m in 19.84 in the Meeting de Paris during an IAAF Diamond League meeting, Saturday, June 30, 2018, in Paris, France. (Jiro Mochizuki/IOS via AP)

Sprinter Michael Norman has sped his way past meet, college, and world records during his two seasons at USC. He showed dominance in the 400m, the 4x400m, the 100m, and 200m throughout the 2018 season. The U.S. Track and Field and Cross Country Coaches Association named him the Men’s Indoor Track Scholar Athlete of the Year.

Growing up, Norman was taught that school and sports correlated with one another. As he transitioned into a college curriculum, he had to make adjustments in order to tackle his obligations.

The Murrieta, CA native is a communications major looking into sports broadcasting. His classes require a great amount of reading and writing. Time management helps him with the workload.

“Some classes are real tough, some classes are pretty good,” Norman said. “I’ve probably wrote more papers I’ve ever written in my life in one semester at USC.”

He ended the indoor season on a high note by breaking the world record in the 400m with a 44.52. His main priority was to complete the race pattern coach Quincy Watts trained him on.

“I was really focused and dialed in on executing the race pattern,” Norman said. “I went across the line, it took me a second to realize what I did.”

During the NCAA outdoor championship, Norman came in first with a 43.61s time; he broke Watts’ NCAA title record from 1992.

A moment that resonated with Norman was competing with the 4x400m squad during the NCAA outdoor championships. He ran anchor, maintaining the Trojan’s strong lead. Norman started his leg with explosiveness, keeping runners from Texas A&M and LSU far behind him.

He came to the final stretch with great speed to secure a 2.58.99 time, breaking a collegiate record.

“When I crossed the line for the 4×4 at the NCAA championships, that was probably the most emotion I’ve ever showed after a race,” Norman said.

His freshmen season also consisted of remarkable races with Norman breaking the freshmen USC record for the 400m five times. He was third on the USC All-Time List with his 44.60 freshmen record.

Norman’s father asked if he wanted to run track in 2009, he soon learned that he enjoyed the sport. A key motivator was seeing his own progression, from his work in the weight room to shedding time off his record.

“I kinda just stuck with it because I enjoyed the competitive atmosphere,” he said. “The individual but team type aspect of track and field.”

Norman helped Vista Murrieta to back-to-back CIF State titles and became National Gatorade Track Athlete of the Year in 2016. He also competed in the Olympic Trials for the 200m, coming in fifth.

Norman aspires to be an Olympic and World champion, he wants to have a long pro track career. Watts told him the importance of being a student to his own races.

“I really have to learn how to master the races,” Norman said. “Every time I stepped on the track for the 400, even if I wasn’t running all out or for an amazing time, I was focused on making changes to my race.” 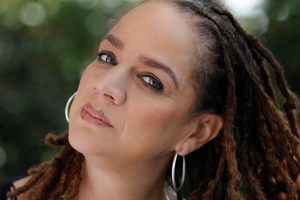