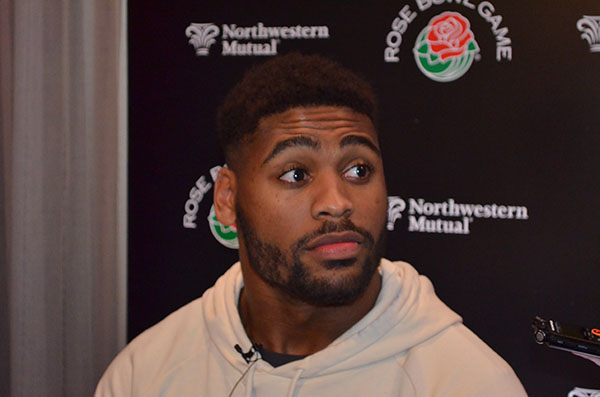 He became a starter for the Buckeyes this past season and helped the team earn a 13-1 overall record and a trip to the 2019 Rose Bowl. During the season, Cooper made 22 total tackles, 5.5 tackles for loss for 16 yards, and 2.5 sacks for nine yards.

During their 20-49 loss to Purdue, Cooper pushed back the Boilermakers’ line of scrimmage for five yards. He improved in time for the Rose Bowl, committing 1.0 tackle for loss for six yards against the Washington Huskies. The Buckeyes defeated the Huskies 28-23.

Cooper had a season high of three solo tackles against the Buckeyes’ rival: the Michigan Wolverines, Ohio State won 62-39.

In 2017, Cooper was an Academic All-Big Ten honoree and an OSU Scholar Athlete. He is a consumer and family financial services major.

“I went to college thinking that I was gonna be an accounting or engineering major, but I realized that football took a lot of my time away, so I had to go to consumer and family finance,” Cooper said. “I wanted to do finance and business, but then that would take a lot of my time.”

Although preparing for gamedays are time consuming, Cooper noted how the university helps student athletes like him succeed.

“Whenever I was struggling in class, I could always go to my advisor and be like “I need a tutor for this class” and they would always give one to me,” Cooper said. “They made sure that I knew my schedule and everything.”

Cooper’s favorite class was an acting course he took as a freshman. He recalled having to stand up in front of the class and recite a monologue.

“The teacher was really fun, too; that’s what really made the class,” Cooper said. “It was a fun monologue and he was like “you should take this acting thing more serious and get into it.””

Although he strives to keep his football obligations and his academic studies separate, studying for school helps him study film for football.

In high school, Cooper was a five-star recruit. He was ranked as one of the top 50 players in the nation and in the top 10 in his position. He enrolled into Ohio State early, Cooper noted the challenges of enrolling early.

“It’s difficult because you’re going in and then you’ve got classes and weight lifting and you’re a freshman, so you have to find your way and what’s going on,” he said. “But I found big brothers, so I had Jalyn Holmes, Sam Hubbard, Tracy Sprinkle, my big brothers. I latched onto them. They told me how to do it.”

The day after the Rose Bowl, Ohio State football head coach Urban Meyer retired. Going into the game, he and the team wanted to ensure Meyer ended his career well.

“We want to send out Coach Meyer the right way. He’s been here, he started this legacy,” Cooper said. “He’s been the greatest coach you could ask for, to come in and change everything like he did and make everything better. I’m sad to see him go.”