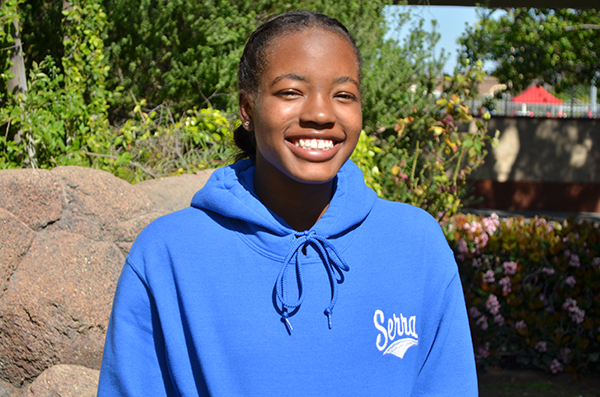 Reaching the State championship was no new journey for Serra senior guard DeLauna Thomas. Remembering how the Cavaliers lost the title match in double overtime during her freshmen year, she advised her teammates to trust their coaches.

“I just told them that it’s not gonna be easy,” Thomas said. “We have to listen to our coaches because they’ve actually been through the experience and won with a different set of girls.”

As Serra battled their way to a state championship, Thomas maintained a 4.2 GPA, taking AP Calculus, honors Spanish 3 and a class at El Camino College.

Her method of achieving competence on the hardwood and in the classroom was having great time management skills.

“When I would go to my workouts, I would do my homework because I knew I would get home late or I knew that I wouldn’t have time after,” Thomas said. “Any opportunity I have to get some work in, I’ll do it.”

Thomas has been a great asset to the program, but a meniscus injury during the second game of the season brought her to the sidelines. After missing the majority of the matchups, Thomas was cleared to play two days prior to the State championship game against Sacred Heart Cathedral Preparatory.

“It was really good to actually suit up and get in for a little bit and to play with them one last time,” she said.

Thomas supported the basketball team by attending practices and games. This season she grew mentally as a basketball player.

“Since I was out every game, watching, seeing certain plays,” Thomas said. “I guess putting myself in the position ‘if I was the player and what I would do,’ it helps me grow.”

The Serra girls’ basketball coach Mckinsey Hadley mentioned how she was elected as the team captain based on her being a great teammate, her effort and her energy.

“I think she’s probably the hardest working young lady that we’ve ever had in the program,” she said. “She will get up at six o’clock in the morning, she will do weights, she would workout, she would come to school, then she would come to practice.”

Thomas aspires to get her doctorate kinesiology. Her father, a co-owner of a day spa, told her the importance of entrepreneurship and money management.

“I want to be a physical therapist and own my own practice,” Thomas said. “I was in physical therapy so long and so much, I just realized that’s what I wanted to do.”