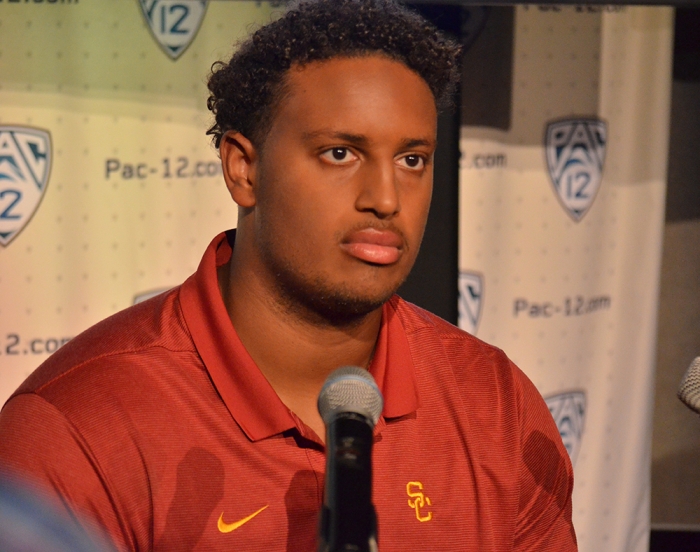 One of the leaders of the USC Trojan football team this year is senior defensive lineman Christian Rector. After the Trojan’s went 5-7 last season, he’s ready to better the program and qualify for a bowl game this year.

“That’s why I came back, [its] to change the narrative and flip the script and not leave on that note,” Rector said.

He currently is on the Lott IMPACT Trophy watchlist, the trophy is given to a defensive player who shows athletic prowess and personal character. Coined a “Swiss Army Knife” of the Trojan defense, Rector also played outside linebacker and defensive lineman throughout last season.

During games, the plan is to have him play outside for first and second downs. Rector prefers to be matched up with a guard, especially in third-and-long situations.

“Now, I’m able to play just one position and home in on my opponent and get his feel for the game and know what to expect,” he said.

His coaches challenged Rector to be stronger up top and more physical and he made personal improvements.

“I’ve put on eight pounds of muscle, which was kind of the hump that was hard to get over,” Rector said. “When I first came into this program, I was kind of undersized, then I put on weight too fast.”

Being undersized hindered him from executing certain plays earlier in his career, acquiring certain techniques helped him.

“I was able to learn technique and that kind of put me in a better position,” Rector said. “In high school, you use your athleticism for the most part, it’s not as much technique.”

Rector attended Loyola high school where he played both basketball and football. He was named on the All-Mission League First Team. The academic curriculum helped him prepare for a university-level workload.

Yet, Rector noted that balancing his studies with his duties on the field has been a challenge.

“It’s been a learning process,” he said. “The time management is the biggest issue with balancing football and film study and everything else that come with it.”

Despite all the work he is doing at USC, Rector still takes time out to serve his community with his internship at the Weingart Center. He works in their General Relief Opportunities for Work program. The Weingart Center combats homelessness by giving those in need skills and resources.

In his internship, Rector assists individuals who have just been released from jail to create resumes.

USC has their home opener against Fresno State on August 31 at 7:30P.M., they also battle BYU and Notre Dame in away games later in the season. The Trojan’s goal is to win the Pac-12 South and the conference championship, according to Rector.

“The whole schedule entirely is a challenge,” he said. “If we do well in this tough schedule, I think we’ll be in the driver’s seat, looking to get a spot in the playoffs.”

To see student athletes that we featured, follow @lasentinelnews on Instagram and @thelasentinel on Twitter. If you know a well-rounded student athlete who is involved in their school and community, email amanda@lasentinel.net