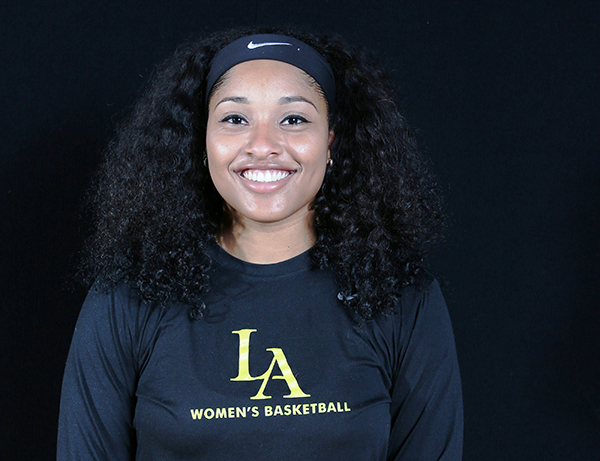 The talents of Cal State L.A. Golden Eagles guard Chiderah Uzowuru can be seen long after the final buzzer of women’s basketball games. Teamwork and creativity are things Uzowuru is all too familiar with.

She is studying Exercise Science and is taking biology and chemistry. Being competitive on court along with prepping for class can be rough, according to Uzowuru. Doing required study hall hours is a great asset.

“You have to have the exact number of hours in study hall, so we just go in there and do our homework,” she said. “I personally love doing homework but some people, they get too relaxed and forget to do homework.”

In her previous semester, Uzowuru took a Black Feminism class. She enjoyed the complexity of the subject.

“It is a topic that everybody talks about but nobody really knows in depth,” she said. “I thought that Black Feminism was like you support female equality, but it was really more in-depth, like I didn’t know what womanism was.”

Photography and videography are Uzowuru’s pastimes. She uses her skills to aide her brother with his business called “Over 9K.”

“I took a class in high school and I just fell in love with it,” she said. “That’s one of my hobbies, just for fun, just to take videos and pictures and just edit them, save it for my use or for the website.”

The junior guard taught herself how to play by watching streetball. As she got older, people began to see her talent and urged her to join a team.

“I never really got into a travel ball team until my junior year in high school,” she said. “For me, it was just pick up the ball, go to the park and just play basketball, because I had the passion for basketball.”

Uzowuru’s mother and family has been a motivating force through her basketball career.

“I call her my prayer warrior because [she is] very spiritual,” Uzowuru said. “My mom keeps telling me to keep striving.”

With the help of Uzowuru, the Golden Eagles went 14-15 this season. Uzowuru was a keen protector of the ball, earning 44 offensive rebounds out of the 84 rebounds she made this season. She earned a season high of 15 points against Concordia Irvine in November and seven rebounds against Humboldt State in January.

At the beginning of the season, Uzowuru questioned her own ability; as the season progressed however, her confidence came back.

“I gained it back and no one could stop me,” she said. “That gave me more confidence to let me know why I’m here and I’m here for a reason.”

Uzowuru urges young athletes to have endurance through their careers. She also noted the importance of not letting others get in their way of their goals.

“Just continue to be motivated because at times, things won’t go our way,” she said. “That should make you stronger, you can conquer anything if you really put your mind to it.”