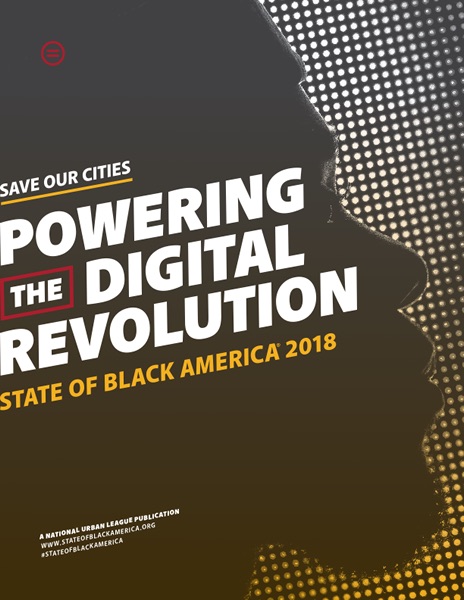 The National Urban League has released its 42nd annual report on the State of Black America themed, “Save our Cities:  Powering the Digital Revolution.”

It shines a spotlight on innovative, tech-oriented programming offered by the organization’s national affiliates, and features the Equality Index, which measures how Blacks and Hispanics are doing in the areas of economics, health, education, social justice, and civic engagement compared to Whites.

In addition to a breakdown of the 72.5 percent 2018 Equality Index for Blacks, a highlight of this year’s report is the Digital Inclusion Index, which benchmarks and measures where Blacks stand in the country’s digital economy.

“Income disparities remain a distressing hallmark of our economy with African Americans and Hispanics earning a median household income of $38,555 and $46,882, respectively, compared to a White median household income of $63,155. People of color are persistently under or unemployed. Nationally, African Americans have the highest unemployment rate at 7.5 percent, followed by Hispanics at 5.1 percent,” stated Marc Morial, president of the National Urban League in its executive summary.

The Equality Index for Blacks this year means that rather than having a whole pie (100 percent), which would mean full equality with Whites in 2018, Blacks are missing about 28 percent of the pie, the report indicates.  Similarly, a Hispanic Index of 79.3 percent indicates that about 21 percent of the pie is missing for Hispanics.

As for the Digital Inclusion Index, it boasts digital skills and occupations, digital access, and digital policy as three pillars.

He said the fact is there has been very little change in disparities in America over the last decade.  However, some areas such as healthcare have improved, and disparities are somewhat smaller than it was 13 years ago, he stated.

This year’s health index for Blacks was 79.3 percent, 20 percent less than Whites, according to the report.  In 2005, it was 76.2 percent.  But when it comes to income, wealth, homeownership, and key economic factors, Morial said it’s hard to make a case that things are getting better.

Another key takeaway from the report is that there is some great work taking place across the country, much of it in Urban League affiliate cities, though not exclusively, noted Morial.

Some of the innovative, tech-oriented programming is focused on retraining the workforce for the new-collar jobs of the future.  These are commonly referred to as good technology jobs involving data science and coding, for instance, and which do not necessarily require college degrees.

In addition, some of the programming is introducing seniors to technology and middle school students to STEM/STEAM. Some are harnessing the power of social media to highlight initiatives and podcasts to deliver unfiltered messages and new voices on critical issues.

Urban League affiliate networks are also working to close the digital divide, and expand the pipeline of people who are prepared, skilled, and trained for such new 21st century jobs, according to Morial.

“On the technology side, what was shocking is that for West Coast Silicon Valley companies, the employment for African Americans was so low.  They’re lower than I may have anticipated,” Morial stated.

According to the report’s Black-White Digital Inclusion Index, fewer than five percent of the digital workforce is Black in the vast majority of companies.  At least half of the workforce in those same companies is White, the index indicates.

“There is a long way to go,” Morial said.  “Our most important charge for 2018 is to focus on the mid-term elections.  I think we’ve got to assert ourselves in the public policy arena.  We have a message to send in the public policy arena that we are not going to sit back and watch silently while efforts are made to further undercut any of the progress we’ve made over the last 50 years,” Morial concluded.