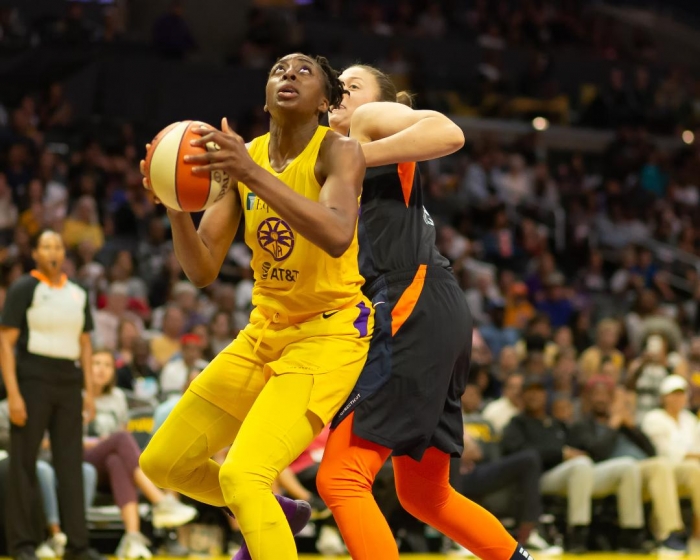 Winning at home is a good feeling, doing it for an 11th consecutive time is an even better one, as the Los Angeles Sparks accomplished just that, with the playoffs quickly looming in September.

Riquna Williams scored 21 points, Nneka Ogwumike added 16 points on a day where she reached her 4,000-point milestone and the Sparks (18-10) went on to top one of the best teams in the WNBA in the Connecticut Sun, 84-72 on Sunday afternoon at Staples Center.

The campaign began in 2015 in a effort to honor standout women and young girls in the Los Angeles community who share goals of empowering the community and females of all ages.

“That’s one of the reasons why I got excited about accepting this job, because there are some elements to coaching and working in the league that you don’t have elsewhere,” Sparks coach Derek Fisher said.

“You have an opportunity I think to play a bigger role in the community, in impacting young girls and young women and different groups and organizations and people that I think don’t necessarily come with other sports leagues. So, I think we’re fortunate from that standpoint.”

Back in action, the Sun (20-9) had its four-game winning streak snapped and dropped out of the top spot in the WNBA standings behind the Washington Mystics (21-8).

Candace Parker had 13 points and 5 assists and Chelsea Gray scored 12. Parker also moved up in the history books herself and passed Vickie Johnson (1,205) at 15th in the WNBA career assists leaders.

Courtney Williams had 18 points, nine rebounds and five assists, while Jonquel Jones added 16 and 12 rebounds, being a challenge to deal with all game offensively.

“It was definitely a playoff atmosphere,” Parker said. “Nneka did a great job. It’s tough to go against [Jones’] length, but she was able to attack her.” 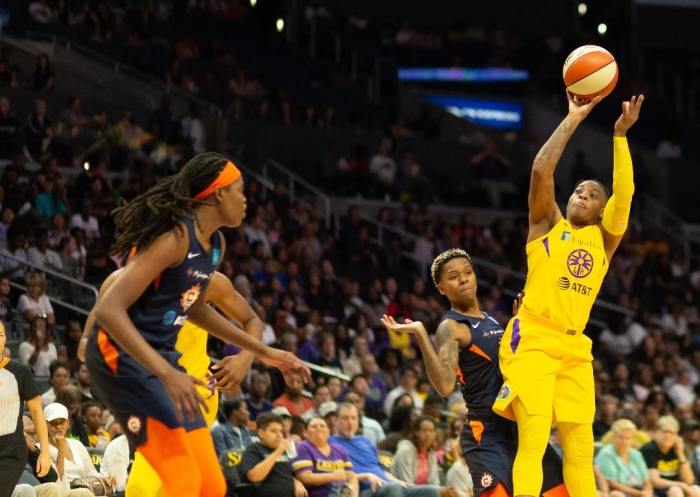 With 10 lead changes, 2 ties and both teams finishing with four players in double-figures, offense was not a problem for either team.

However, in the second quarter, Los Angeles changed the game on the defensive end, holding Connecticut to only 13 points, forcing nine total turnovers through 20 minutes of play.

“I thought overall we were really good,” Fisher said on the team’s defensive efforts.

“Part of playing against good players is the commitment to stick your nose in there, and then there’s a trust factor that you have to have in your teammates… that’s something I think we’ve been improving in that area.”

Tied at 39 all in the closing seconds of the second, Williams dribbled into the corner, hosting a tough contested a 3-pointer that found the back of the net, giving the Sparks momentum and a 42-39 lead at the half.

Momentum surely carried on into the third for Los Angeles, as the Sun had no answer while on the Sparks went on a 16-7 run, led by Ogwumike’s 8 points in the quarter.

In the final period, the Sparks led by as many 16 points and the Sun could not cut their deficit below 12, which led to an 84-72 victory for Los Angeles.

The Sparks now will prepare for a three-game road trip, where they will first face the Washington Mystics on Tuesday, August 27 at 4:00 P.M. followed by the Indiana Fever on Thursday, August 29 at 4:00 P.M.