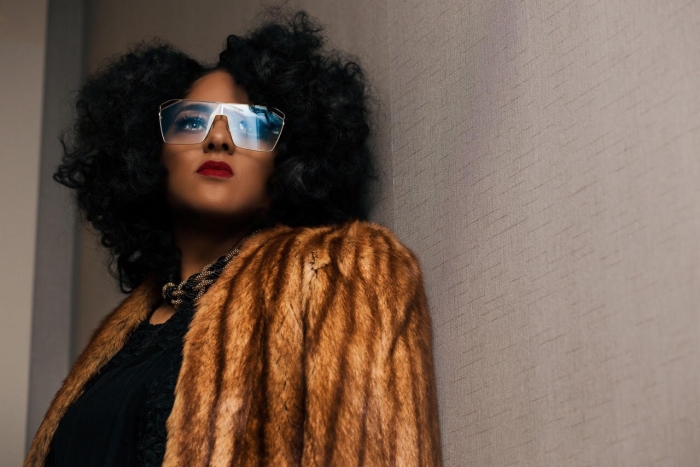 Solo artist,Marsha Ambrosius, known for classic hits like “Getting Late” and “Say Yes” with former R&B group Floetry, says she cooking up a new album and a few other surprise for fans in 2020.

We’ve all known sultry-soul artist, Marsha Ambrosius as the distinctly, eclectic voice captivating hearts around the globe with solo-hits like “Far Away” and “Say Yes” from her long standing career with the R&B group, Floetry. Today, Ambrosius is letting people in on a brand new side of her as she jets sets in marriage and motherhood. Recently, the songstress, who’s penned hits for Alicia Keys, Jamie Foxx, and Michael Jackson, made a pit stop in Los Angeles to head up the Baldwin Hills’ Crenshaw Plaza’s Annual Winter Wonderland extravaganza, performing holiday classics and a slew of her own hits to bring some holiday cheer.

In an exclusive interview, the Sentinel caught up with the Grammy-nominated singer-songwriter to get her thoughts on being in love, working with the late, great Nipsey Hussle and the ebbs and flows of the music industry.

Los Angeles Sentinel: Tell us about the 2018 release of your latest album, Nyla and why this album is so different from any of your other projects.

Marsha Ambrosius: I was in an extremely pivotal place as far as where I was as an artist and a woman. During the course of almost two decades, having concentrated on my career, I’ve finally found love of my own and the family of my own. The Nyla album is the first time I’ve created in a space in love like that. I’ve never been in love like that.

The prior music that I’ve created was all aspiration, things that I put into the Universe to come to me. So, I think with the Nyla album is when I finally had that. It was just a snowball effect. Ultimately, it wasn’t even about the music, it wasn’t about career, this is what I wanted as a human being.

LAS: How has becoming a mother changed you?

MA: Nyla’s about to be three in a couple days, and I feel like she’s been here my entire life. Like, I don’t remember not being a mother now. It’s like all roads led to this part. The change is from an emotional aspect. It’s an overwhelming emotional rollercoaster of all things, buts it’s a magical, peaceful space to be in. It’s humbling and honorable to just be able to say that I’m Nyla’s mother, before anything.

LAS: What advice do you have for career driven women looking for love?

MA: You have to be truly open to it. This is what you want for your life and for your spirit and your happiness, so you really have to stay true to what that is to you, not what you think it takes to get there, because the journey I took to get it, I had no idea I had to go that route to be where I am today. 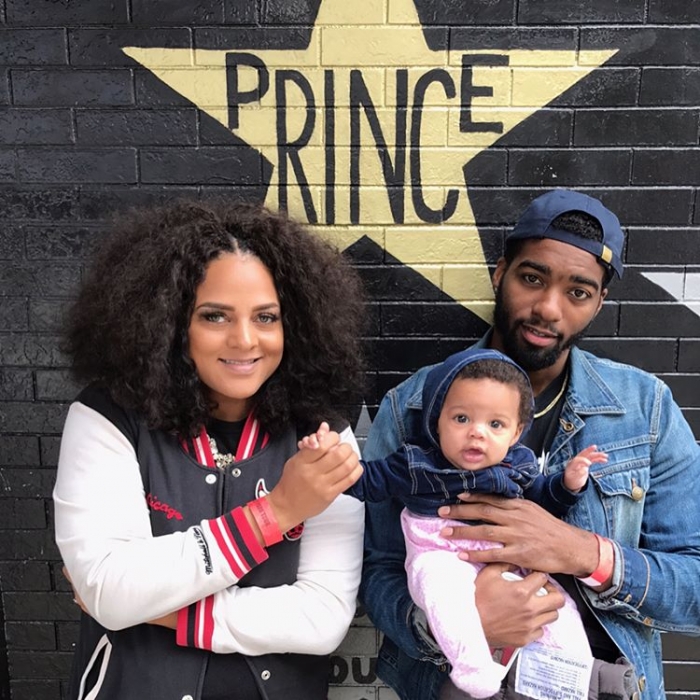 It was about being open and it was about forgiveness and it was about you not being able to listen to other people’s stories and go ‘well why can’t that happen to me?’ You have no idea what somebody else went through to get where they are, and it may not be your level of happiness, that may not be what you actually want. I always thought I was never really a needy person, until there was someone that I needed.

LAS: The world experienced a great loss in Nipsey Hussle this year. Can you describe your creative process in working with him? Did you ever think it would be your last moment to cherish?

MA: No, this is someone that was on a mission far beyond what it was for Hip Hop. I was glad to be apart of the musical journey with him, but having seen what he was doing outside of that, and just for people, I knew that there were so many great things to come. It’s heartbreaking to speak of him in past tense but what he did when he was here is embedded and instilled in so many that are carrying on this marathon that he initiated. It forced people to retrace their steps a little bit and kind of walk the path that he did in order to help and it was all about healing and helping the community he grew up in.

Ambrosius credits Karen Civil for making the collaboration happen, saying after the connection was made years ago, that she and Nipsey would share demos, until the “Real Big” moment came when Ambrosius laid her chorus on the track to make the song a success. “This feels like the literal Victory Lap,” Ambrosius recalled. “This is late night, riding through LA, like let me just kick my feet up,”she continued, admiring the late rapper and the mutual admiration and respect they shared for each other’s music.

LAS: You’ve done quite a few collaborations with Hip-Hop artists in the past. Can you describe your personal affinity to Hip-Hop music?

MA: I know, it’s because deep down I wanted to be a rapper. From the beginning of watching Missy Elliot and her breaking out of Sista and then doing her solo thing, from brand new to Missy “Misdemeanor” Elliot — I was always told I could do one or the other back then. Seeing them do so, I just found my niche in melodically flowing the way I felt it naturally, and because I have a very distinct voice, people were like, ‘oh I want that thing Marsha does’ so it became almost like a separate career outside of me just being Marsha the artist.

MA: Ownership is everything. And once you do own it, yes it’s uphill grind, but if you can walk tall and stand proud in your work and build a rapport with faithful fans that are going to be there for you, paying for concert tickets and touring — the success I’ve been able to have over the years is because it’s always been about the fans, like I’m playing to my audience and I continue to build with that. Own it, because once you sign to them (record labels), you lose that, and once you gain it back, you understand why they held onto you.

LAS: You’ve written songs for many artists including Jamie Foxx, Alicia Keys, and the late music icon, Michael Jackson. Who are you now as a songwriter?

MA: It’s a wonderful thing to be able to become other people within your work. I’ll sit with Alicia Keys and we’ll go, ‘okay, well where are you at in your life today?’ and then we’ll create the song. That’s how I create with her, but with “Butterflies” for Michael Jackson, that song already existed and he heard it and related to it, so by the time we got into the studio together, I’m able to vocally arrange and conduct him in the studio to embody this feeling that he wanted to create as he heard me on my demo. He said ‘I want to do it exactly how you did it,’ so I’m now Quincy Jones for him in the studio. It’s crazy and I was 22, 23 at the time of doing that, so I kind of fell into the deep end as far as conditioning and honing in on my work. So now being a wife and a mother and all of those names under my belt, I can just live life and experience and continue to write at the highest level. 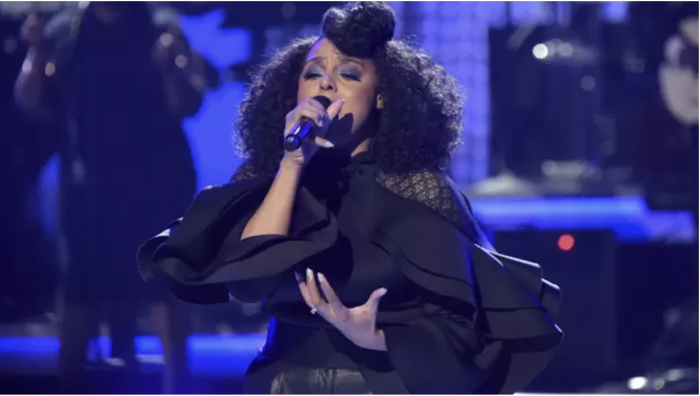 LAS: What role do you feel your English roots play in your music?

MA: I think it’s more respective to not everything that was going on in the charts, but the imports. We heard the songs that you guys didn’t play on the radio. We were very spoiled in hearing the b-sides and remixes and having access to a very vast catalogue of R&B music, Hip-Hop, Jazz, it was eclectic. My mother was practically a DJ with her vinyl collection, she’s like Quest Love times twenty, she had everything to listen to. Both of my grandparents being African American, my mother’s father and my fathers’ father, we were always sent the best of vinyl, to 8-tracks to cassette tapes to CDs; pretty much from the day I was born having access to music like that.

LAS: How would you describe the state of music today?

MA: I think the overall state is the good ones are going to be here for years to come. The ones that are just here, they go away too, and that’s been the industry. You have your one-hit wonders, you can have your ‘go virals that week’ but something else is going to go viral next week and you will be forgotten.

Those million views don’t equate to a million dollars. The difference with technology today is that everyone’s bragging about having a billion streams on Spotify but are you the billionaire on Spotify collecting that check that they can because there’s no vinyl records anymore? Or what used to be iTunes, when it was about the Internet, you had to pay that ninety-nine cents before you heard the entire song, so for the artists and musicians, it fell back a little bit.

If people are here for you as an artist, they’re going to come to your concert, they’re going to buy your music regardless. This isn’t about streaming or getting that one like or that one follower that makes you feel validated. There still has to be an organic plan in order for that to result in a successful career.

These days, Ambrosius spends her quiet time in the Las Vegas desert overlooking mountain views, where she enjoys listening to Emily King, watching the stars with her daughter Nyla, and indulging in 3-point shooting competitions with her husband, Dez Billups.

Ambrosius also says she’s planning on doing a lot more hip-hop features, recently working on Nipsey Hussle tribute record alongside rapper, The Game. In 2020, Ambrosius says fans can expect an album, along with something special for her American and UK supporters alike 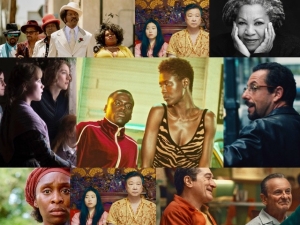