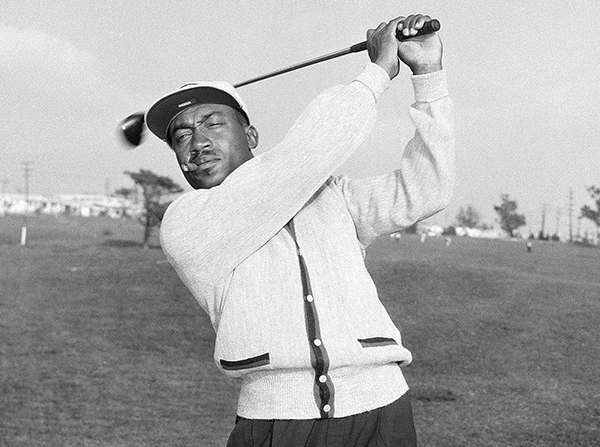 FILE – In this Nov. 11, 1957, file photo, Charlie Sifford works out at the Western Avenue golf course in Los Angeles. The son and ex-daughter-in-law of the late black golf pioneer have been sentenced to 2 and a half years in prison for stealing from his estate. The pair had pleaded guilty last month to stealing $315,000. Sifford died in February at 92. (AP Photo/Harold P. Matosian, File)

CLEVELAND (AP) The son and ex-daughter-in-law of late black golf pioneer Charlie Sifford have been sentenced to 21/2 years in prison for stealing from his estate.

Cleveland.com reports a judge in Cleveland indicated Thursday that Craig Sifford and his ex-wife, Sandra, will be eligible for release sooner. The pair had pleaded guilty last month to stealing $315,000.

Their attorney had pushed for probation instead of prison time, but a judge concluded that wasn’t a viable option because of how much money was stolen.

The theft was under investigation when Charlie Sifford died in February at 92. Authorities had received a complaint saying Craig Sifford was abusing a power of attorney for his father.