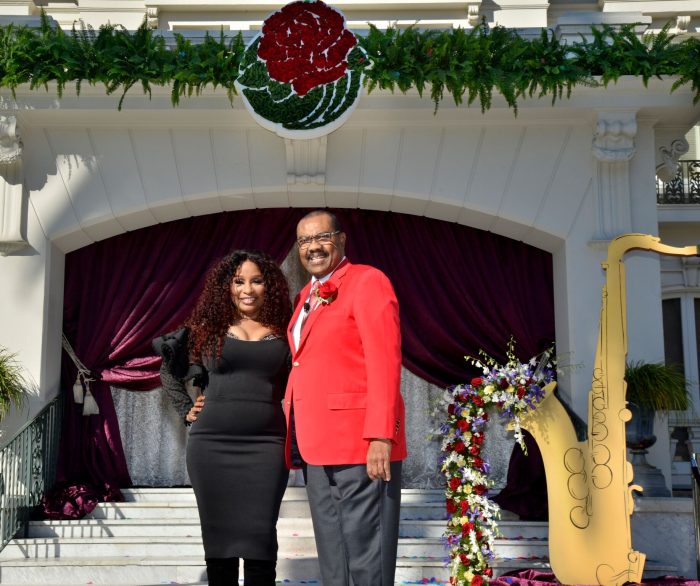 Chaka Khan, a 10-time Grammy Award-winning R&B/soul artist, was named today as the grand marshal of 2019 Tournament of Roses.

Khan will lead the 130th Rose Parade, themed “The Melody of Life,” and participate in the pre-game celebration at the 105th Rose Bowl Game on Jan. 1.

“I’m so honored,” the 65-year-old singer said. “This is something so new and different for me.”

Speaking at a ceremony at Tournament House in Pasadena, Khan joked, “I just don’t know where to go with this.”

“To think that I would ever be a part of something like this, who knew?” she said. “I’m really honored. … But I hope you like me. … I’m thinking now about a rose hairpiece. Something purple.”

Turning to the seven young members of the Tournament of Roses Royal Court, she added, “At any rate, we’re doing to have fun, huh girls?”

Tournament of Roses President Gerald Freeny said Khan fits perfectly with the parade’s musical theme, noting that music touches the lives of people around the world.

“That’s the universal power of music,” he said. “On a personal scale, it gets us through our day, it accompanies us through good times and bad times. It is quite literally the soundtrack of our lives. But on a grand scale, it has the ability to heal, to unite, to promote change, to bring joy and harmony and rhythm and happiness. Music has a unique power to transcend borders and boundaries, to travel across countries and continents. It speaks to old and young. It represents, enriches and sustains our human existence. It quite simply touches every single life on Earth.”

A Chicago native whose grandmother infused her with a love of music, Khan created and R&B group when she was just 11 years old, the Crystalettes. She went on to perform with a series of other groups, most notably Rufus, which collaborated with Stevie Wonder to produce the hit “Tell Me Something Good” in 1974.

She released her first solo album in 1978, launching a career that has included hits such as “I Feel for You,” “Through the Fire” and “This is My Night.” She most recently took home Grammys in 2008 for best R&B album for “Funk This” and for her collaboration with Mary J. Blige on “Disrespectful.”