The Los Angeles Sparks defended home court well on Friday, May 31 when they defeated the Connecticut Sun 77-70. Despite having a slow start, the Sparks committed six steals and four blocks against the Sun.

“We just talked about during halftime and before the game that our backbone has to be our defense,” said Sparks guard Chelsea Gray. “Just being able to be that anchor that when we’re not scoring, we’re still able to get stops.”

Los Angeles went into the fray without center Candace Parker and guard Alana Beard who are injured as well as center Maria Vadeeva who is fulfilling overseas commitments.

Prior to the Sparks going on a four-game road trip, they signed veteran forward Ashley Walker. Walker scored a combined 28 points for the Sparks during their two preseason games.

“No matter what, we have a champion’s mentality,” Chiney said. “I think we realize we have high standards for ourselves.”

This game marked the first career start for guard Sydney Wiese. Los Angeles drafted Wiese in the first round of the 2017 WNBA draft.

“She is the type of player that you have on a championship team,” Sparks head coach Derek Fisher said. “She leaves who she is guarding in order to help another defender and she isn’t worried about her match up.”

Jonquel led a 7-2 run for the Sun to start the game, guard Riquna Williams and Ogwumike started a rally to get back. The game remained close for most of the first half. 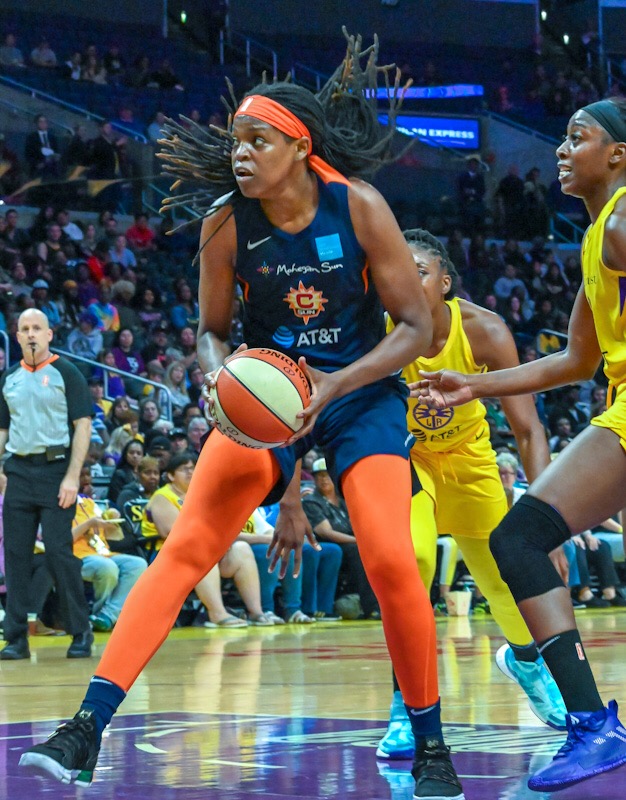 The Sparks were slow to score, but quick to defend early in the second quarter. The Sun had a strong front court presence in Jonquel and forward Brionna Jones. Yet, Los Angeles worked around the Jones’ front court defense and Connecticut’s offense went cold for three minutes. Wiese and Nneka hit a three each to end the first half. Jonquel was one point shy of a double by halftime with nine points and 11 rebounds.

Although the Sparks remained in the lead for most of the game, they are still learning how to play with one another and build their own culture. The Sun out rebounded the Sparks 51-30.

“As we play these games, we’ll get more comfortable with each other, understand where each person wants to get the ball, their sweet spots, our advantages,” Wiese said. “It’s nice to be able to put it on our shoulders.”

Connecticut snuck up on the Sparks with the help of guard Rachel Banham, guard Layshia Clarendon and forward Alyssa Thomas. Guard Courtney Williams brought them within two points of the Sparks. Two minutes later, Jonquel hit a three pointer to bring the Sun within one point. Yet the Sparks found shots to extend their lead in the final minutes of the game.

“In the fourth quarter, we were able to stop them in transition and that’s a really good Connecticut team in transition,” said Sparks rookie center Kalani Brown. “They had a lot of fire power, so we just had to be focused on defense.”

The Sparks return to the Staples Center to clash against the New York Liberty on Saturday, June 15 at 7:00 P.M.