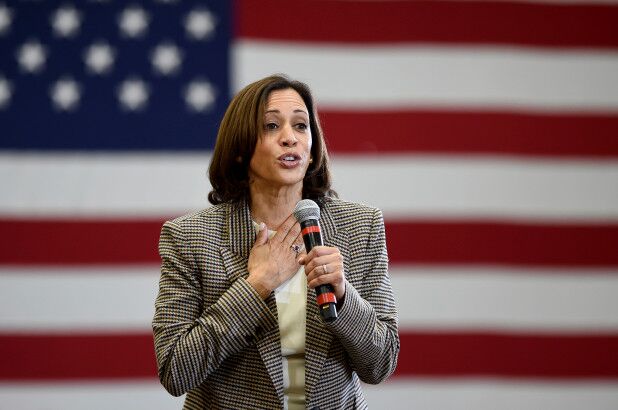 Democratic presidential candidate Kamala Harris spoke at a criminal justice forum at a historically Black college on Saturday after a group that honored President Donald Trump with an award was removed as the event sponsor.

Organizers at Benedict College in Columbia say the candidate forum in which Harris and other Democratic presidential candidates were speaking was considered separate from the event in which Trump was honored a day earlier, renaming the event and replacing signage from the venue with that of the college.

The group, 20/20 Bipartisan Justice Center, however, continued to claim through Twitter that it was still the sponsor of the event, advertising Harris’ appearance and tweeting photos of her onstage with captions indicating she was still participating in their event.

Several other Democrats appeared onstage, including presidential candidate Cory Booker. The New Jersey senator congratulated the college on its decision to remove the Justice Center as event sponsor _ even as the group itself posted a photo of Booker speaking, continuing its claim to the event.

The forum was reconfigured after Harris withdrew late Friday citing a lack of access for students at the historically Black college and frustration over organizers’ decision to give Trump its Bipartisan Justice Award, in part for his work on the First Steps Act.

Soon after, the city’s mayor, Steve Benjamin, told The Associated Press that he would organize an alternative event, working with Benedict officials to coordinate what was renamed as the Collegiate Bipartisan Presidential Forum, which he hosted.

Organizers of the original event did not respond to questions from The Associated Press as to their involvement with Saturday’s events, hanging up when a reporter asked them for on-the-record comment.

The Harris campaign said in a statement that, despite the group’s claims, Harris spoke with the understanding that she was participating in the new forum. “In no way, shape, or form is Kamala Harris interested in affiliating or associating with a group that would honor Trump in this way.”