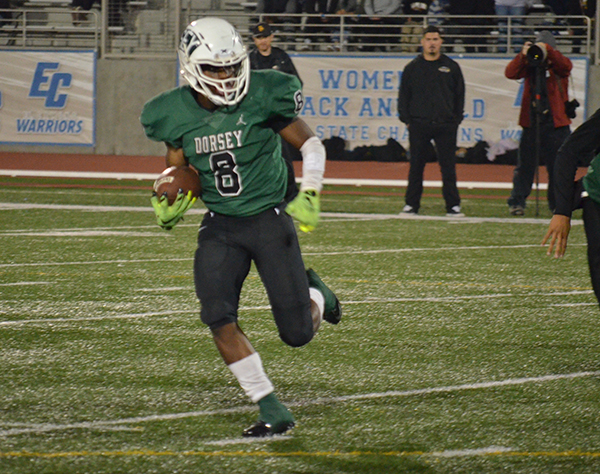 In a highly defensive battle, The Dorsey Dons fell short 20-22 to the San Pedro Pirates in the CIF City Section Division I Championship.

Senior running back Keeshawn Johnson made 19 carries for 144 yards and sophomore running back Michael Sanford made two rushing touchdowns for Dorsey. Senior quarterback Justin Bernal made five passes for 73 yards and junior rusher Josh Ward made 18 carries for 91 yards for San Pedro.

“We made some really good plays and other times we didn’t line up right,” said Dorsey head coach Douglas Bledsoe. “We gave san Pedro too many creases and they got some yards that we usually don’t give up.”

The Dons scored first during their first possession when senior running back Johnson rushed in a 90-yard touchdown play. Their two-point conversion failed, leaving Dorsey with six points.

“The defense was pretty high, but our coaches, they gave us a game plan,” Bernal said. “We started off a little slow, but we picked it up a little bit and we just took off from there.”

The Dorsey offense started the second quarter with a 45-yard gain via a pass to junior wideout K’wan Stewart, giving Dorsey a first-and-goal. Sanford scored for the Dons two plays later.

San Pedro kept the ball on the ground, scoring in less than three regulated minutes when Ward made a 29-yard carry into the endzone. 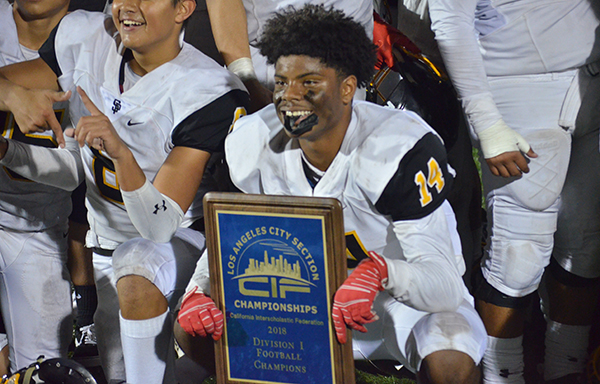 The Dons’ offense hit a skid, suffering a 10-yard penalty and a pick-six by Pirate sophomore defensive back Joshua Johnson. Although the Dons blocked the Pirates’ extra point kick, Dorsey was now trailing by two points.

Both teams relied on their rushing game to advance, Johnson running for Dorsey while Ward and junior Alexander Prado running for San Pedro. The Dons defense hunted down senior quarterback Dylan Kordic and the Pirates defense focused on Johnson throughout the second and third quarter.

Dorsey was deep in their own territory when they made a crucial decision to keep their offense out on a fourth down early in the fourth quarter. Johnson rushed the ball, but came up less than a yard short of a first down. The Pirate offense returned on the Dorsey 25-yard line.

Four plays later Ward ran in a touchdown from two yards out. Dorsey blocked their extra point, but had an eight-point deficit. 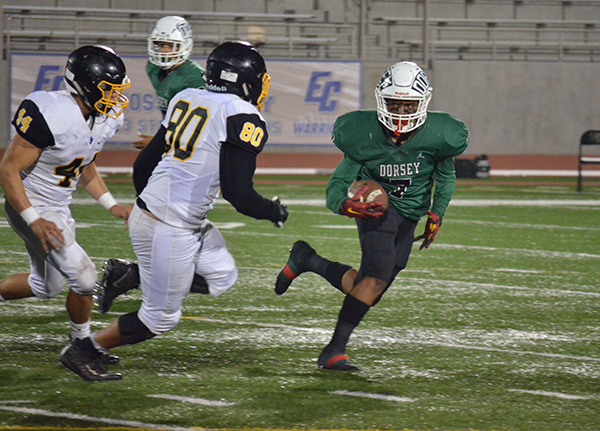 The Dons defense denied San Pedro a second first down on their next possession. The Dorsey offense then returned with the end of regulation looming near. They survived a fumble and a fourth-and-1 to score a rushing touchdown by Sanford. For the two-point conversion, quarterback Julien Walker launched an incomplete pass. The Pirates offense ran out the remaining minute of regulation.

“I was a little bit shocked to see,” San Pedro head coach Corey Miller said about the two-point conversion attempt. “I really thought they were gonna run the ball in.”

Dorsey earned the top seed of the Division I playoffs.  The Dons endured a 0-5 start to go undefeated in the Coliseum League this season.