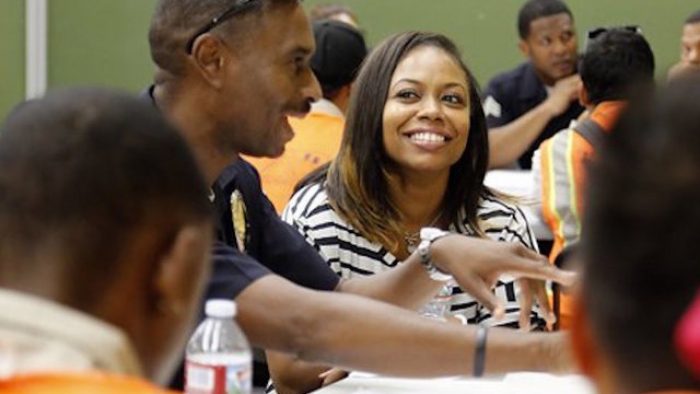 Rodney King’s daughter Lora King, and Los Angeles Police Officer Rashad Sharif, left, talk with a group of young people who have had their own run-ins with police at a meeting of the Los Angeles Conservation Corps, which provides at-risk youth with job training, education and work, in downtown Los Angeles Thursday, Sept. 15, 2016. She was just 7 when her father was beaten by the Los Angeles Police Department. (AP Photo/Reed Saxon)

Lora King, the daughter of the late Rodney King, whose beating by LAPD officers triggered the 1992 riots, will launch the “I am a King” scholarship to celebrate Black fathers today on the 27th anniversary of the start of the six-day-long explosion or urban violence.

Its mission is to provide financial support for Black dads like her own so that they can play a more active role in their children’s lives, the Los Angeles Times reported. The scholarship, which would be issued periodically and range in value, would cover activity costs as small as dinner and a game of miniature golf, and as large as an all-expenses-paid trip to Disneyland.

A prominent private tech entrepreneur has given $10,000 to establish the fund, and others have promised to contribute, said King, who also hopes to solicit donations from the public.

King, 35, hopes to remove the financial barriers that sometimes get in the way of paying for bond-building outings. Those were the type of obstacles removed from Rodney King’s life when the city awarded him $3.8 million in damages. He used that money to expose his daughter to a life outside South L.A. They went skiing at Mt. Baldy, surfing in Venice and attended too many art exhibitions to count, she said. He poured resources into furthering her talents, paying for leadership camps and art programs.

He also devoted much of the remainder of his 47 years to preaching racial reconciliation and helping others struggling to break free of substance addiction, which he’d suffered as a consequence of his beating.

By giving to other children what her father gave her, Lora King hopes to keep her dad’s memory alive. “Who knows if they will ever acknowledge him in the way that they should,” she said. “He really didn’t care for that. He just cared about making a difference in people’s lives and creating change.”

Three years ago, she created an organization in his honor, the Rodney King Foundation for Social Justice and Human Rights. But she labored to get it off the ground as she juggled work and parenthood, according to The Times. 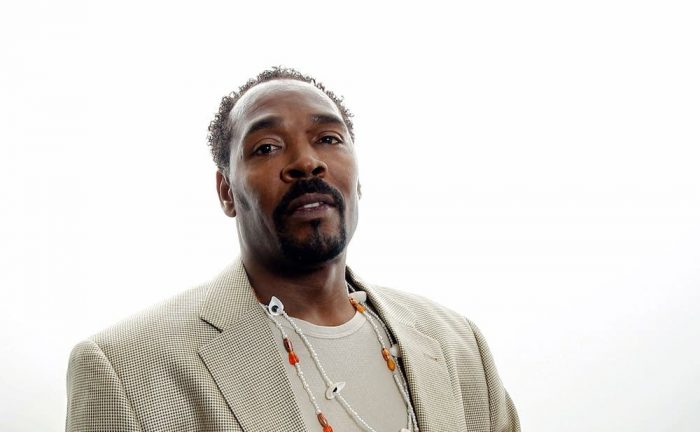 Rodney King, an unemployed construction worker who was out on parole, had been drinking on the night of March 3, 1991, when officers pulled him over on Foothill Boulevard. He was acting erratically when he stepped out of the car. LAPD officers surrounded him, shot him with Tasers and struck him over and over again in the head and body with a two-foot-long solid piece of aluminum.

They stomped on him with the soles of their boots.

Four police officers faced trial for the beating. A jury, with no Black people on it, acquitted all of them April 29, 1992. In response, angry demonstrators clustered on corners, set fire to entire blocks, looted stores and assaulted bystanders. Civic leaders pleaded for calm.

The whir of helicopters during the King beating roused George Holliday from his sleep. He grabbed his video camera and pressed record.

The grainy footage exposed the mistreatment that Black people had long suffered at the hands of police — decades before the era of Black Lives Matter, when victims of police violence became hashtags and cellphones captured viral videos of police shootings of unarmed Black men.