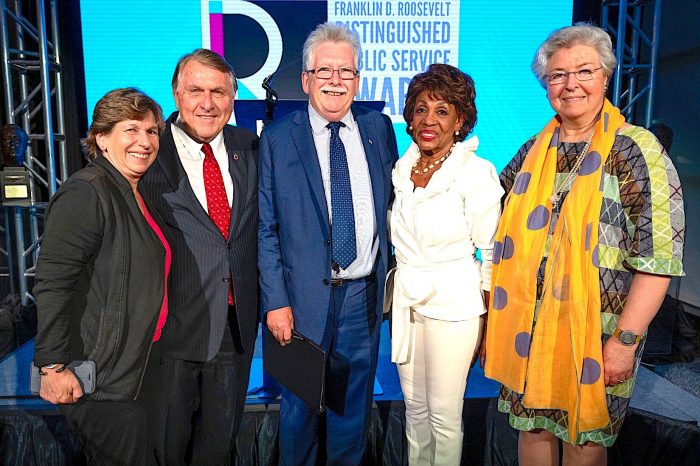 Congresswoman Maxine Waters (CA-43), Chairwoman of the House Committee on Financial Services, was awarded the 2019 Franklin D. Roosevelt Distinguished Public Service Award by the Roosevelt Institute at the International Brotherhood of Teamsters office in Washington, DC.

Congresswoman Waters was honored for her “tireless efforts in the House of Representatives and in the 43rdDistrict of California; for advocating on behalf of underserved communities; and, fighting for increased job training and creation, environmental protections, and a peaceful foreign policy agenda.” Her award was presented by House Speaker Nancy Pelosi.

During the event, Rep. Waters thanked the Executive Committee of the Roosevelt Institute as well as representatives from many of the nation’s largest labor unions who co-chaired the event — the Service Employees International Union (SEIU), International Brotherhood of Teamsters, Amalgamated Bank, American Federation of State, County, and Municipal Employees, Communication Workers of America, and the American Federation of Teachers — for their longstanding support. “I want to thank you for this honor, and I want to thank you for your support of me. Your support of me has been more than you will know and [more than] you will really understand,” said Congresswoman Waters.

The Roosevelt Institute is a think tank that believes in an economy and democracy by the people, for the people. It is the nonprofit partner to the Franklin D. Roosevelt Presidential Library and Museum in Hyde Park, NY—America’s first presidential library – and hosts a number of events, including the Four Freedoms Awards and the Distinguished Public Service Awards, to honor the legacy of Franklin and Eleanor by celebrating those whose work carries their values and vision forward today.