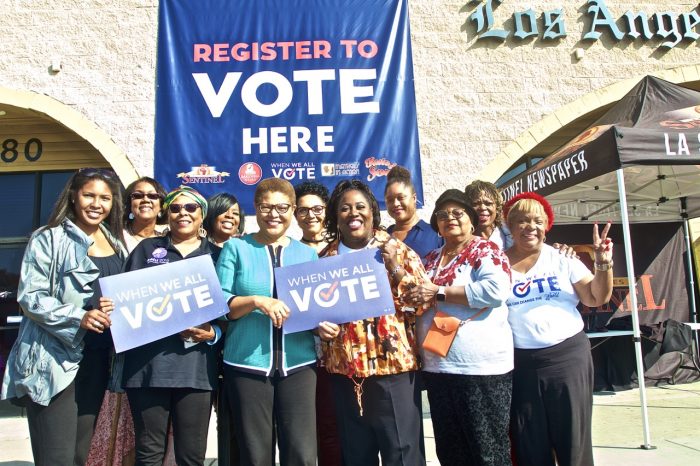 With less than a week until election day, The Los Angeles Sentinel hosted a 12-hour long “Get Out the Vote” phone-banking marathon with free shuttle services to early voting polls. Special guests Congresswoman Karen Bass and “The Talk’s” Sheryl Underwood joined Danny Bakewell Sr. and several community volunteers in calling constituents of the 25th congressional district.

“We’re calling in a race that is the last republican seat in L.A. county,” says Rep. Bass of the 25th district which includes Santa Clarita, Simi Valley, Palmdale, Lancaster, and the northern part of the San Fernando Valley. “What is going to determine this race is turnout and I do not believe that if Black folks go out and vote, that they are going to vote republican.”

Rep. Bass says that targeting our voters and getting them out is the most important thing for this district.

Underwood took part in calling, urging voters to get educated on the ballot and show up to the polls.

“Sheryl Underwood is an actress and comedian but she really needs to be a political commentator,” Mr. Bakewell Sr. joked about Underwood, a vocal Republican who denounces the Trump administration. “She’s the truth.”

Over 2500 calls were made in an effort to remind folks how important it is to vote in the 2018 mid-term election.

To find out more information about how to vote, visit www.lavote.net and be sure to get out and vote next Monday, November 6.