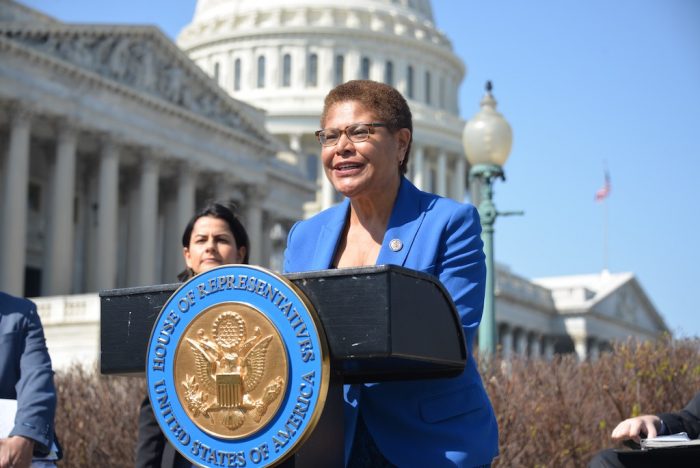 In 2008, Congresswoman Karen Bass made history after being elected as the first ever African American woman to become Speaker of any state legislature. Since then, Bass has continued to represent the 37th congressional district of California by being an active voice for criminal justice reform, fighting for America’s foster care system, and strengthening the United States ties with Africa. Now Bass will have the opportunity to continue making change in her new role as the chair of the Congressional Black Caucus (CBC).

Bass’ colleagues from the DNC, CBC as well as local and religious leaders extended their warmest congratulations on her latest feat.
“[I am] truly excited to see the energy and determination Karen Bass will bring to her role as chair of the Congressional Black Caucus,” said minority leader of the United States House of Representatives, Nancy Pelosi.
DNC chair Tom Perez says he “couldn’t be happier to call Congresswoman Karen Bass the next chair” of the CBC. 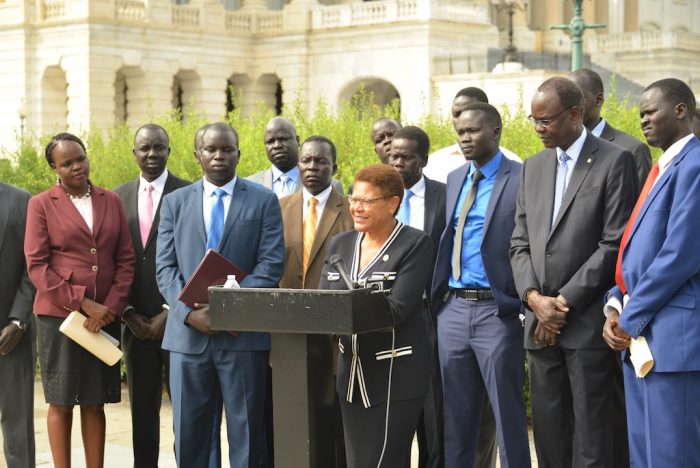 “From fighting for criminal justice reform and child welfare to affordable health care and a stronger economy for all, Karen has devoted her life to serving California families and African American communities across the country,” he said.
Congressman Emanuel Cleaver, II referred to Congresswoman Bass a “trailblazer.”
“I am delighted that Congresswoman Karen Bass has been elected to lead the Congressional Black Caucus for the 116th Congress. Rep. Bass has been a trailblazer and a true advocate for issues concerning people of color. I am certain that her leadership will continue to move the CBC ahead and I look forward to working with her,” he said.
Councilman Marqueece Harris-Dawson told the LA Sentinel:
“We are proud to share our leader, Karen Bass, with the rest of the country. I am eager to see the largest Congressional Black Caucus make great strides under her leadership.”
LA City Council President Herb Wesson, who is also a longtime friend of Bass, congratulated her in a Twitter post:“Congratulations@RepKarenBass on being elected chair of the @OfficialCBC! It’s been an honor to have you as a friend, colleague and representative. The Congressional Black Caucus is in good hands.”
Pastor J. Edgar Boyd who is the senior minister at First AME Church of Los Angeles calls Bass “a true champion.” 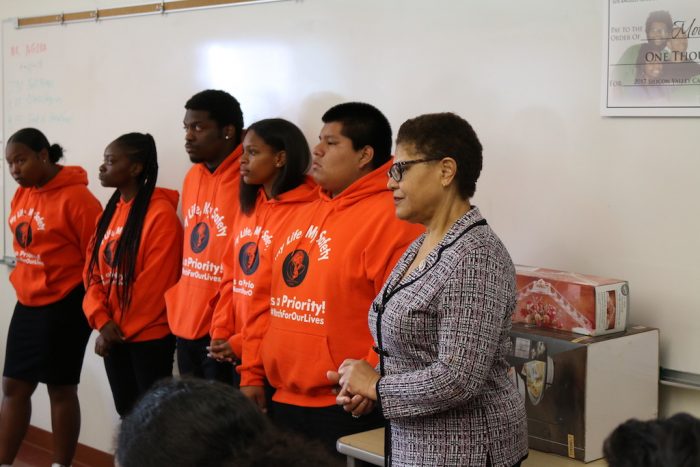 “Karen Bass has become a true champion for causes which impact the lives of people living within her district, across California and even beyond the borders of the US. True courage is seen in her fight to ensure the rights and opportunities of children, working parents, seniors, veterans, and the LGBT community; while yet promoting measures to ensure civil justice, human safety, and civility at our borders. Her leadership at the helm of the CBC will provide dividends well into the future,” he said.
Supervisor Mark Ridley-Thomas mentioned that he can think of no one better than Karen Bass to lead the CBC.
“With 55 members, the Caucus is larger than it has ever been, and well-positioned to advance a progressive agenda. I look forward to hearing more about that agenda when Rep. Bass delivers the keynote speech at this year’s Empowerment Congress, to be held January 19that Charles Drew University of Medicine and Science,” he said.
Senator Holly Mitchell who has worked with Bass in the past described how Bass’ leadership will influence the CBC.
“Someone with her experience in terms of managing budgets the size of California and managing budget crises the size of California and to have been a leader of one of the most powerful state legislatures in the country…all of that experience with her national contacts that she will bring to her role as chair will be hugely beneficial to the caucus as a whole. I am excited for her and I am excited for the future of the caucus,” she said.
Bass, who is the eighth woman to hold this position, will replace outgoing chair Cedric Richmond. Other members of Congress who were also elected include: Congresswoman Joyce Beatty(D-OH-03),first vice chair; Congresswoman Brenda Lawrence(D-MI-14),second vice chair; Congressman Hank Johnson(D-GA-04),secretary; Congressman A. Donald McEachin(D-VA-04),Whip; and Congressman-elect Steven Horsford(D-NV-04),Parliamentarian. 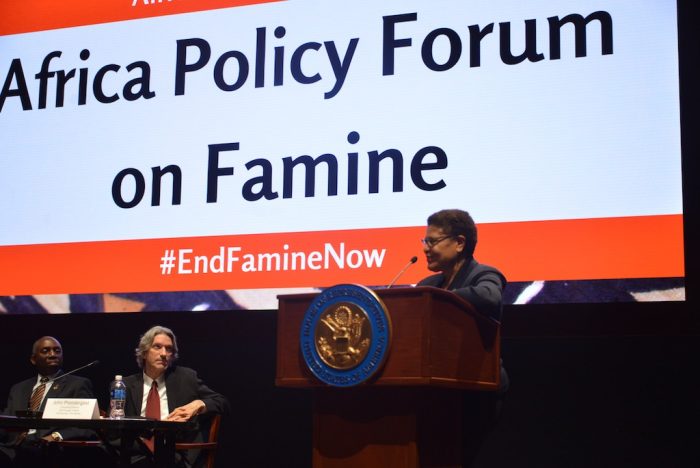 “From her days in the California General Assembly where she became the first African American woman in U.S. history to lead a state legislative body, to her work in Congress to address both domestic and international issues affecting people of African descent, Congresswoman Bass has demonstrated tried and true leadership,” said Richmond in a statement.
“There’s much work to be done next Congress to ensure equality and justice for African Americans and other marginalized communities, and I am confident Congresswoman Bass will continue to provide strong leadership in this regard.”
Bass and the newly elected members of the CBC executive committee will take office on the first day of the 116th Congress. In the meantime, the LA Sentinel spoke with Congresswoman Bass to discuss her vision for the CBC as well as the things she hopes to tackle in this position.
“Well one of the main things that I hope to accomplish in the two years that I’ll be able to serve in this capacity is to really elevate the accomplishments of individual members of the Congressional Black Caucus,” said Bass.
“We have a President who is openly hostile and hateful when it comes to African Americans and immigrants and people of color in general. What he has done behind the scenes in attempting to dismantle 60 to 70 years of gains that we have made in the Civil Rights Movement through various levels of activism through legislative accomplishments. He is quietly dismantling a lot of those accomplishments and I want to see that stopped.”
Bass goes on to say the Trump administration is the most corrupt administration she has ever seen in her life and that the CBC will be at the“forefrontof that fight” holding them accountable for their actions.
Aside from new role in the CBC, Bass will also be the chair of the subcommittee on Africa.
“What I really want to do there is begin to change the way the United States does foreign aid,” she said.
“Too many times we give foreign aid to our own consulting firms. I think we need to spend more attention assisting Africans, build their capacity. This is something President Obama was doing with initiatives like ‘Feed the Future’ and ‘PowerAfrica.’ He was trying to address some of the capacities in Africa.”
Bass further explains her plans for aiding Africa by zeroing in on infrastructure.
“So, looking at ways that we can do partnerships with U.S. businesses and African businesses for roads, bridges, ports and airports,” she said.
One of Bass’ other passions apart from her advocacy in Africa is her commitment to the Black Press. During the interview, Bass announced that she will be convening with the National Black Publishers Association (NNPA) to discuss the ways in which the federal government can do business with the Black Press.
“It’s inexcusable that we spend millions and millions of dollars in advertising everywhere, but virtually zero in the Black community with Black Press. That should change, I hope I can make a dent in that,” she said.
Executive publisher of the Los Angeles Sentinel and the L.A. Watts Times, said Danny J. Bakewell Sr., recognizes Bass’ qualifications and appreciates her steeping in and up to fight for the Black Press.
“Bass’ ascension to the chairmanship of the Black Caucus is a great moment for Black America and particularly for the Black Press,” said Bakewell.“Sheis poised, professional, and will not be denied when she is in pursuit of things that are important for Black America.”
Kimberlee Buck contributed to this article.
ADVERTISEMENT
ADVERTISEMENT
Categories: Exclusive | National | News | Political
Tags: Black Press | Brandon I. Brooks | cbc | Cedric Richmond | Congressional Black Caucus | Congressman A. Donald McEachin | Congressman Emanuel Cleaver II | Congressman Hank Johnson | Congressman-elect Steven Horsford | Congresswoman Brenda Lawrence | Congresswoman Joyce Beatty | Councilman Marqueece Harris-Dawson | Danny J. Bakewell Sr | DNC Chair Tom Perez | Karen Bass | Karen Bass new CBC Chair | Kimberlee Buck | LA City Council President Herb Wesson | Nancy Pelosi | National Black Publishers Association | Pastor J. Edgar Boyd | Senator Holly Mitchell | Supervisor Mark Ridley-Thomas